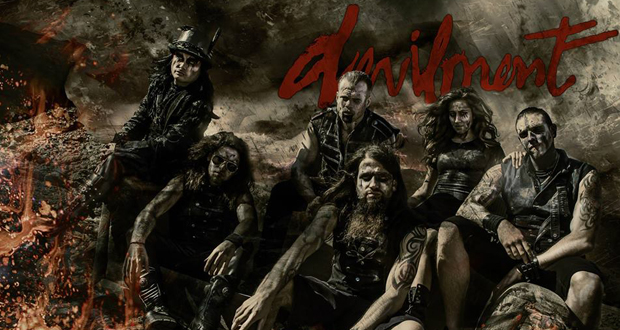 We caught up with Nick Johnson of Suffolk band Devilment. The band also features: Dani Filth, Colin Parks, Nick Johnson, Aaron Boast , and new addition Sam S Junior. Nick talks us through the crew, and tells us a bit about how they all came together.

We talk about the bands most recent album ‘The Great and Secret Show’ (out October 2014) – “For me the album is a bit of a melting pot” says Nick, referring to the different musical elements to the album.

The album has some interesting lyrical concepts behind it, it was described by Dani himself as the: “occult pulse behind the world, a land of imagination that can be slipped into at will. Like a generator buzzing behind everything. The truth behind the Wizards curtain. A phantasmagorical nightscape. A wonderland. A midnight playground. The fertile land of the dead”.

Devilment are currently confirmed for a few festivals this summer including: Graspop Metal Meeting, Rockharz Festival), and Summer Breeze.

‘The Great And Secret Show’ was recorded at Grindstone Studios in Suffolk with producer Scott Atkins, who has previously worked with the likes of CRADLE OF FILTH, BEHEMOTH, AMON AMARTH, SYLOSIS and GAMA BOMB. The artwork was created by legendary Drake Mefestta.