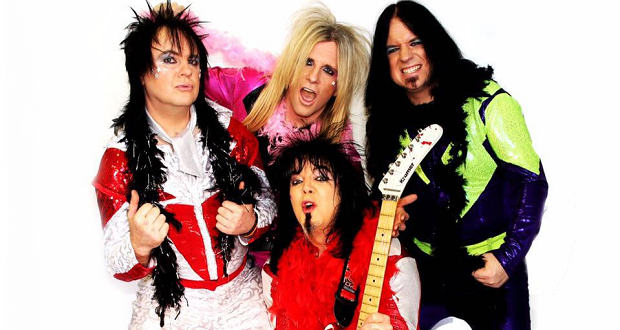 We had the chance to sit down with Welsh glam-metallers Tigertailz a couple of hours before their set started at the Underworld in London. Their UK tour kicked off on the 8th of April and this was only their third date so we found them in the best shape.Formed in the mid-1980s by bassist Justin Smith (known to fans as Pepsi Tate) and guitarist Jay Pepper, Tigertailz has undergone several line-up changes over the last twenty years. Pepper is now joined by front-man Rob Wylde, new bassist Berty Burton and long-time drummer Matt Blakout. We spoke to Pepper about his career then and now.

Over 25 years after your most famous album came out, you are still touring and having fun while making music. What’s your secret?
JAY: It’s becoming more about what you are rather than what you do. We did give up for quite a few years and we stopped talking for twelve years or so but once you start get going again you keep doing it and you keep thinking it’s not over till it’s over. I think we are very lucky to do what we are doing, I mean I’m 52 now…

Still the same passion?
JAY: Well yeah, body not so much (laughs)

You have been going through a lot during your long career, is there one particular moment or episode you will have impressed in your mind forever?
JAY: I guess when you get the call your record has made it to the top 40, I suppose back in the day that was a huge deal! All those years of grief and rehearsals obviously made it worthwhile. That was pretty significant, things like that make you forget about the bad stuff so you mainly remember the good moments like playing in big sold out shows or meeting a lot of new people.. I’m still star struck when I go and play with big bands. I think sharing the stage is really rewarding. So yeah it’s all about those moments.

How’s things with the new line-up?
JAY: As great as these things can be. When a band like ours has been around for ages is very hard to maintain the same people for all sort of reasons.

So I guess you guys get along quite well now?
JAY: Yeah, all the guys are very easy going, we made a great album. As I said this is as good as it can be.

How’s this tour going so far?
JAY: We only just started but it’s going great! We used to get all the beer and wine in the fridge which would be gone by now but nowadays we are here drinking tea so times are changed, we don’t get too wild like before.

Last year you released a new album, Lost Reelz, how would you describe it?
JAY: The people from the record company came to us looking for something unique. Stuff that never came out and wasn’t on the web. That kind of stuff you forget about or that end up not getting used for whatever reason. So they wanted to go through everything and pick up the unused stuff. It was more like a collection of a lot of demos, not a proper new album if you know what I mean.

Throughout all of these years, is there a favourite song you will never get tired of listening to and playing live?
JAY: I like them all, really, but we play ‘Heaven’ and we know it’s always been good live. As per the ones you listen to I guess it depends on your mood, any of them bring back different memories.

Doing music in 1987 and doing music in 2016, what’s changed?
JAY: I think music has become devalued. Making a record used to be a simple business plan. In the 80’s it costed quite a lot of money, I remember being in a studio for months used to cost us a fortune but then you make profits selling a lot. Nowadays it’s much cheaper to make music digitally but it’s like people almost don’t expect to pay for it. And the thing is bands ends up spending a lot of time, money and energy making records and being on the road touring. So it’s also becoming quite difficult in a way.

How was the KISS Kruise?
JAY: We had a fantastic time, I mean just playing there with your favourite bands was a great experience. One of those school boys’ dream. We had played with Kiss before but this time was amazing!

What would you say your fans need to expect from you guys from now on?
JAY: We’ll always have the big catchy songs and choruses and big guitars sound playing out loud but I suppose this record has shifted to a more commercial sound too. Hopefully everyone is going to be pleased with it.

Any final message?
JAY: Just thanks to everyone for sticking with us for so long. I still can’t believe we are still here, like any band only do it for as long as they can. So thanks to everyone who keeps coming to see us and has supported us in the past too. It’s incredible after so long.

Tigertailz’ new album ‘BLAST’ is available on April 25th. Keep checking for a review of the album.

You can still catch the Welsh rock legends at the following dates: