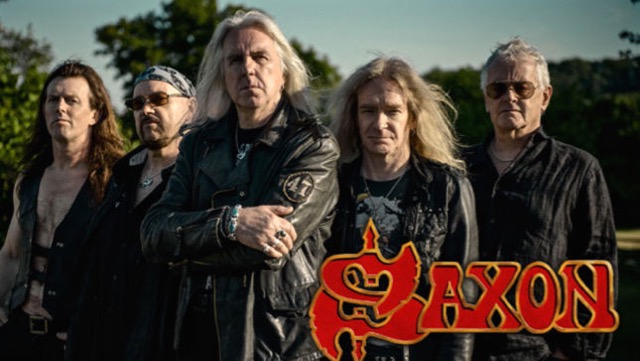 A new Saxon package “Eagles and Dragons” is out soon. The set features nine albums which before today, were only released on vinyl in some regions (including Germany, Italy and the UK) and even then, only in very limited quantities.

The new luxury 180 gram vinyl versions in the collection, including inner sleeves with all the lyrics, are a must-have for all Saxon fans and record collectors. 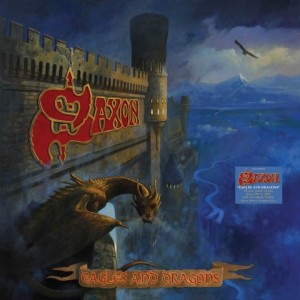 We chatted to Saxon’s front-man Biff Byford about this historic release:

“I think this collection will attract younger fans who are getting into vinyl. This is not just for collectors… There are some great albums in there and they’re on heavyweight vinyl too,  so it they will sound great…”

“Some of the discs were picture discs, originally,  some were on vinyl… they were very limited releases, quite rare … sometimes the releases were small… only 400 or 500 were put out.  So this new set will be quite a big release and the ‘special editions’ with the posters will have a limited run.”

Why release these albums now?

“The licence became free on these albums [from SPV GmbH] though Demon already had “Solid Ball of Rock.” And, of course,  they wanted whole full-set. So we came up with the idea of releasing the whole collection…  as a special boxed-vinyl set. Which is something that has been successful for others, for example Rammstein released a set recently [they issued their XXI  box set last year.] I came up with the idea of trying to get Paul to do exclusive artwork for the box-top. And so it makes it a nice package. And we won’t be doing it again… I cannot really see this box-set being around too long to buy!”

“When I look back  at those years, I remember  it was the the start of Grunge. It wasn’t really a great time for British rock bands. Bruce had left Maiden [1993 ] and Rob had left Judas Priest [1991 ]  and we [Saxon] were in a bit of a turmoil as well… Nigel [Glockler, drummer] had gone off to do something else and there was a bit of something going on with Graham [Oliver, guitar.]  Yet “Solid Ball of Rock”  [the  tenth studio album ] was a huge hit…  And the single “Requiem” too — very big actually. In fact  the success took us by surprise. Very big across Europe and in America as well.  The title track “Solid Ball of Rock”  was written by a pal of mine Bram Tchaikovsky — he was with The Motors —and he wrote a rockabilly version of that. Me and Paul transposed it to become a more mainstream heavy rock number. That really was a come-back album for us. And it was a great tour too.”

“The next album  “Forever Free”  was problematic…  the producer was a nutcase and there were definitely problems in the band.  “Dogs of War” really was Graham’s last album…  he didn’t tour on that album… he left the band New Year’s Eve 1994.  So Doug [Scarratt, guitar] came in. And Doug did the “Dogs of War” tour.  His first gig was in Texas in front of 25,000 people! It was a bit of a “Baptism of Fire”  for him!  Doug is a loveable guy he’s nice to tour with… there’s no friction there… so he’s been in the band ever since.”

“The nine albums definitely see the morphing of the late 1980s Saxon into something else…Something that people actually liked again. That’s a simple way of putting it, really. I don’t think that people liked the “Destiny” Saxon too much (the ninth studio album which was released in 1988. ) Because it was too far from where we had come from. I wanted to go back to album covers being connected to our band name and the song titles. I particularly wanted the title of the album to be connected to Saxon. So I went back to that sort of idea. Swords and dragons.  We started all that!  Crusaders etc. We made a conscious decision to go back and get that kind of imagery.”

“I am an amateur historian, you know. History is in all our songs. It’s a great thread. To go back to. There’s only a few who do it… You know, story-tellers. It’s quite big in prog rock.  Not so big in Heavy Metal. Me, Bruce, Lemmy maybe…  Rob a little bit too… we like to tell stories. And those stories are sometimes quite historic.  Or mythical.”

“The last three albums in the set: “Lionheart” [2004], “Inner Sanctum” [2007]  and “Into the Labyrinth” [2009]  are great albums. Maybe UK fans will prefer Lionheart the most. It’s a very big album, especially here in the UK. It’s a very British album…  I came up with the heraldic idea for the artwork — I took my ideas to Paul — and it is probably one of the album titles that connect best of all  with the cover image. You know, all that St.George’s Cross and dragon stuff.  And we are proud to be English… we don’t care about putting up the George Cross…  we’re not bothered about any ‘connotations.’ You know, Maiden use the Union Jack,  so we use the George Cross.”

“I like all the albums in the collection. I have a fondness for “Forever Free” [1992] and I just wish that the guy who was producing it could have got it together. It suffered a little bit from production and timing problems…. There is “The Court of the Crimson King”  on Killing Ground [2001 ]…
I love prog-rock and we even invented a bit of jazz-rock for the middle that has the flavour of  ‘Schizoid Man‘ [King Crimson. ]  I don’t know if anybody else  twigged that… but that’s what we did.   Our younger fans thought it was our song!”

“ I think newcomers should seek out “Lionheart” definitely. “Sold Ball of Rock”  too. There’s gems on them all…  there  really are, all the albums in this collection are great…  but younger fans might like “Metalhead”  [1999 ] it’s a very dark album. There’s stuff going on about aliens and a bit of spiritualism in there too. And on that album,  it’s really the first time that Doug got into the songwriting role in a big way… So it’s very dark… There’s a lot of suspended fourth notes in on that album…   I love that album. But I would definitely say the stand-out albums from that period are: “Solid Ball of Rock”, “Metalhead” and “Lionheart.” Those three…

Is there anything new in the pipeline?

“Well, we’ve started writing again… me and Nibbs have been emailing our ideas back and forth. So we may well start to put together some ideas… though Nigel has just moved to America… so he needs a bit of time to adjust. But we might start on some new material in March/April. Have a few sessions, you know. . And, of course, we haven’t finished the Battering Ram tour yet — obviously with Lemmy’s death and things — so there’s a little bit of unfinished business to do. We are gonna go out again in October on a headline Battering Ram tour and we’ll ask Girlschool to come along with us. And,as you know, we do a lot of shows when we visit Countries… we are  not the sort of band that just does two shows and expect everyone to travel to them. No, although we possibly should do that, we don’t!  We do all the gigs. Wherever we go — we do all the cities. We haven’t really transcended into the bigger 6,000 or 7,000 venues… but I think that if we keep the venues at a reasonable level again, then maybe, just us and Girlschool could do it.”

How would you summarize  “Eagles and Dragons”?

“It  is really a great package. It takes you through the period when we could have lost the plot. And a lot of bands did just that, during those times!  But we kept it together. We re-grouped.  And we attacked again. And it just shows that we are members of the ‘Never Surrender’ club. To be a member of that club you have to go through this!  So go out and grab this package whilst you can. Perhaps we should have called this box-set : Never Surrender!

“Eagles and Dragons” will be released on 18th March and will be available exclusively from Demon’s D2C Store.

Biff was talking to Neil Mach.