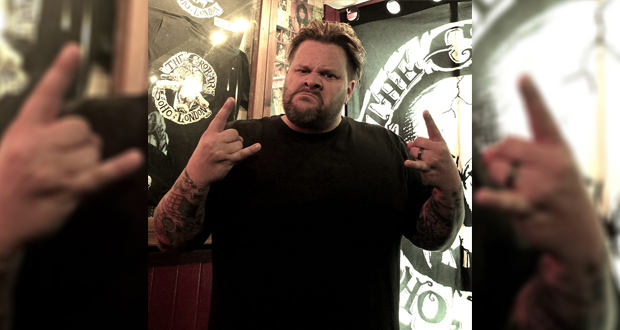 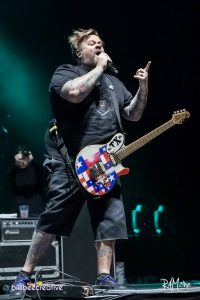 We met expert lead vocalist, guitarist, and primary songwriter for BOWLING FOR SOUP — Jaret Reddick — at the fabulous CROWBAR near London’s Tin Pan Alley ahead of the band’s show at Wembley with Buckcherry and mad glam-metallers Steel Panther.

“It’s the first time we have been a support band over here since 2001…” Reddick tells us. He appears dog-tired and thoroughly jet-lagged after his long journey. So we sneak into a hidden corner near the bar area to chew the cud.

The band have just released the crowd-funded new long-player Drunk Dynasty. So we wanted to know all about that:

“Coming off a few years of solid touring I thought it was kinda the right time for some new music… And when I started this Drunk Dynasty project it was just gonna be an EP. We was just gonna try to get 5/6 songs down and just get it out there. We crowd-funded it [that was massively successful] and as we finished up the first six songs, I was just like: “I’m not done, you know?” I was still writing. So we basically went back in the studio and made it a full-length album. It’s eleven songs and it just came out digitally for the pledger’s — and the reaction has been amazing.”

Is that a good way to do it — to crowd-fund a project?

“If you really think about it in its simplest form, all it is is pre-sale. And band’s pre-sell all the time. Essentially it’s a pre-sale but it allows you to have access to the funds to allow you to go in there and do it.”

“When we got dropped by Jive (Records, 2009) we went into do Fishin’ for Woos, you know, it was gonna be a massive undertaking and a massive risk to undertake that with your own funds. You sell ’em and it all comes back, but that is a risk. So that’s one way to look at crowd-funding — to pre-sale.”

“Another way is that it actually forces you to be close to your fans. It forces you to keep them posted, to update regularly, talk them through the whole process. So, essentially, they get more content for the price of the record. So everybody wins.”

“The fan has become the label now! The fans are paying for the making of the record, the printing, all of it. The fans are funding it… And they’re getting instant access to it as well [it means] they are part of the process [and can say] Hey! I helped make that album.”

What was on your mind during the writing process?

“My mind was all over the place. I had all these ideas. And then it was sort of like ‘backing off’ of that and realizing I had the freedom to do whatever it is I wanted. And I knew I wanted to make a happier album.”

“All of our albums have been really, really happy but the last one [Lunch. Drunk. Love] well, people call it my ‘Divorce Album.’ I was going through some shitty personal times and, although it’s a well-received record, there’s a lot of emotion in it. So I think I wanted to do more of the light-hearted ‘Hey, I’m happy again” stuff — that was driving me the most.”

Is there a Zombie connection?

“Are you talking about the cover? No, they are not Zombies! We’re just fighting over a beer!”

“Although America is very ‘Zombified’ at the moment. It’s a funny place right now, man. This election is super-odd and I don’t really talk politics because I don’t know enough about it to say anything, but isn’t it just bizarre?”

Are you excited about the Wembley show? 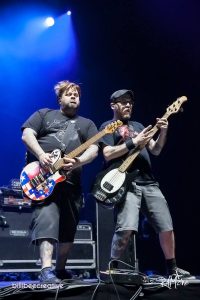 “We are. There’s no pressure, we are second to three, we have a 50 minute set so every song we play can be a bone fide hit. So we’re just gonna have a blast! And then we get to watch Steel Panther. It’s just gonna be awesome!”

“I am a huge fan of Buckcherry. Actually, I love the band. I’m excited to see them live.”

“I actually have a story about Buckcherry. It’s about the song ‘Check Your Head’ [1999.] I had driven down to Dallas, in my dad’s car. There was a bunch of shit going on in my life that I wasn’t happy with. I wasn’t happy with the relationship I was in. I wasn’t happy with my job. All of this shit. And that song — I listened to it over-and-over for a solid hour-and-a-half and by the time I got home I had made all the decisions I needed to make. I got out of the relationship, I started doing music full-time and I can literally credit that song with all of that! And it’s crazy. If you were gonna ask me who the most influential band in my life were, it’s gonna be The Descendents, The Ramones and all this. You would not think I would say Buckcherry. But it’s true, that song just reached in and — at the right time — it just grabbed me.”

Talking of odd influences, tell us about Frank Turner…

“Oh man, I love his material. I think Frank Turner is the poet of this generation. I think his writing is so convincing. The way Frank can tell a story in a song and sing these real conversational lyrics — and get away with it — but not just that… But really, really make an impact… It’s just magic. He’s just a magical songwriter. He really is. There’s so much depth to it.

Will you play any of the new songs in London?

“We’re gonna try to play the new single, “Hey Diane” it all depends on how the sound-check goes.”

“Diane is a great friend of mine. She’ll actually be at the show in London and she’s a very special friend and our family’s have gotten to be friends and our kids have gotten to know each other.”

“To me you are the best music fans. In the world. And I do mean that. I mean it because music is such a big part of the culture here. Family vacations are spent going to festivals, and one of the things that struck me way-back was that [British] people would say, “You guys and Rage Against the Machine” are my favourite bands and I would be like “What?” How is that even in the same sentence? Because, in America, if you liked ‘this’ kind of music then you weren’t allowed to like anything else. Luckily, it’s a little less cliquey now [in the U.S.] but I just love how a British fan can like Counting Crows, Bowling For Soup and Slayer. Cos’ that’s me! You need different kind’s of music for different days. And different moods.”

Anything else you wanna tell us?

“Yes, I’d love you guys to check out my Podcast “Jaret Goes to the Movies.” It’s a weekly podcast about an old classic movie. We just take a movie and watch it and talk about it and it’s such a lot of fun.”