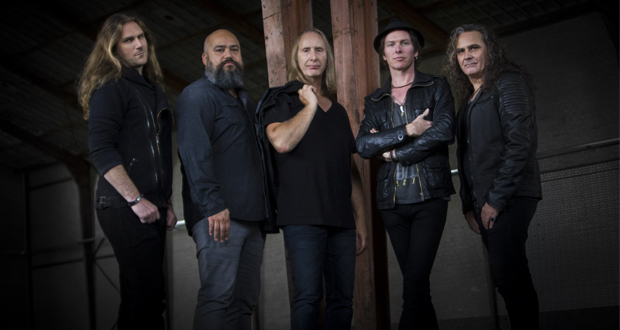 The Dutch band, Kayak, despite being well known in Prog rock circles, are largely an unknown quantity to the average rock fan. Formed in 1972 by Ton Scherpenzeel and Pim Koopman, they released their debut album, See See the Sun, in 1973 and it contained no less than three hit singles. Between 1973 and 1981 the band released a further eight albums before entering a lengthy hiatus which extended unexpectedly until 1999, when the band regrouped to appear on Dutch TV. They’ve since released several more albums, including three live albums. Despite the sad loss of Pim Koopman in November 2009, the band has continued and has just released its latest album, Seventeen. They admit their keeping a low profile over the years means they’re probably not as well known as maybe they might have been but, despite it all, they still have pockets of fans in many different countries.

Sole surviving founder member Ton Scherpenzeel (TS) agreed to take time out to talk to RAMzine and answer some questions pertaining to the band.

Kayak began in 1972. Back then, who were your early influences?

Ton: At the time when we started as a band, I’d say Yes were influential. But, before forming the band, I used to listen to radio stations like Radio London and Caroline all day, so I heard lots of British pop and rock; The Beatles, Kinks, The Move, The Who, Hendrix and Procul Harum, to name a few. I’d especially like to mention Judee Sill as her music and lyrics went straight to my heart. I suppose she influenced my sense of melody as well.

There’s been a considerable turnover of musicians who’ve played in Kayak down the
years. Why such a high number?

Ton: Every musician, every member, current or ex, has his own story to tell, his own reasons for leaving (or, in a few cases, being asked to leave). Part of the problem is that Kayak is a difficult band to make a living from. Holland is a small country and our success playing live has mostly been limited to this small part of the world. This means all members of the band have to do other things, like play in other bands. That makes it hard to keep this band together. But, I agree, our turnover is more than average. However, life’s all about change, and Kayak’s no exception to that rule.

You stated the line-up which recorded your 2015 album, Cleopatra, had reached the end of its life cycle. Was this line-up purely for the album or were other factors involved?

Ton: I’d rather not say too much about that period, as it was a sad and depressing time, and it made me doubt whether I should even continue with the band, or music in general.

That line-up had been together for several years, apart from Pim Koopman’s death in A band within a band had slowly come into existence after that, and this doesn’t work for Kayak. I compare it to a house where the roof is leaking, the walls have deep cracks and the foundations are unstable. There then comes a moment when you have to decide whether it’s better to break the house up and build a new one.

How do you account for the fact that, despite your stating it sounded rather ‘iffy,’Phantom of the Night’ became your biggest hit?

Ton: I guess it’s the songs, rather than the production, which counts in the end. Or, to be more precise, the song itself. ‘Ruthless Queen’ made it into the top five, which helped the album get to number one and become a platinum disc. But I don’t think one could get away with a sound like that these days, no matter how great the song might be. But then, what do I know?

Ton: We always say we simply waited until the kids had moved out! The band didn’t break-up in 1981, it just didn’t continue. The band had many personal, financial and artistic problems and had run out of steam. I tried again with a band called Europe (no, not the Swedish guys) but it didn’t work. I then wrote lots of music for the theatre in between, played with bands like Camel and Earth & Fire and did some session work, and didn’t feel like restarting a band like Kayak again until 1996, when Pim and I teamed up again. But, it still took a couple of years before this resulted in a record deal and a complete line-up.

The bands latest album, Seventeen, contains some very lengthy pieces of music. Does this suggest the band’s heart is still essentially in Prog Rock?

Ton: Any label is fine with me, especially if it helps to connect our music to a wider audience. I just write and record what I think is worth my while writing and recording. I like to explore and exploit as many sides of my craft as possible. This sometimes results in improbable and extreme songs, shorter quirky ones or lengthy epics which makes people wonder what kind of band we really are and in what category can we be placed in. That sometimes makes it hard commercially, but that’s just the way it is. I don’t think in terms of formats and labels.

What did Andy Latimer add to the recording of the new album?

Ton: What he always does; he adds feel and his unique personality to the music, whether it’s Camel’s or mine. He’s instantly recognisable as a musician, and that can only be said of the really great guitar players. I’m happy and honoured he wanted to play on ‘Ripples on the Water’ as I wrote it with him in mind. He doesn’t often play acoustic guitar as a solo instrument but, on this track, he did. Now, I only wish I’d made the track longer as the electric segment is too short. Well, it’s better to wish it were longer rather than thinking it should be shorter.

How hard was it for you, personally, to continue with Kayak after the sad passing of Pim Koopman in 2009?  Did you ever think, now’s the time to stop?

Ton: Not a year’s gone by since 1973 when I don’t think maybe I should stop. Keeping a band like Kayak going in Holland is a tough job, and it requires determination and passion, and perhaps also a blind eye as well to a lot of naivety. But, the death of Pim Koopman made it all come really close. But, then again, he wouldn’t have wanted me to stop with Kayak, but it took me a year to decide I really wanted to continue. He’d been my friend since we were 14, and he’s a warm and generous human being, as well as an amazing musician and composer.

Kayak haven’t played in the UK for some considerable time. Are British fans ever likely to see you play in this country again?

Ton: I really hope so. I played in the UK as recently as 2015, as the support act to Camel. But I’d really like to play there again with Kayak. It’s been too long since we’ve done so!!

You joined prog legends Camel in 1984 and you played on a couple of their albums. What was it about Camel’s music that appealed to you?

Ton: Apart from Andy Latimer’s fantastic guitar playing, I think he and I share the same musical soul. There’s a mysterious connection underneath that’s really hard to describe. I was both amazed and honoured he asked me to play with Camel in 1984. I’ve done a couple of tours with them and really enjoyed them. Besides the musical joy, I found the pleasure of only having to play and not worrying about everything else that comes with keeping a band on the road.

Being a musician for forty plus years, you’ve written a lot of music. Which piece has meant the most to you on a personal level?

Ton: That’s a hard one. Many of the songs I’ve written aren’t known because they were written for Dutch theatre productions so naming one of them is useless. But, as for Kayak, it’s not easy to separate the personal from the professional writer here. Then there’s the difference between a certain song and the way it turned out in the end. Many tracks are personal, also or especially as far as lyrics go, but it’s not always obvious, and I’d like to keep it that way.

How’s that for an evasive answer?

If you could select one album and say “That’s the music of Kayak, that’s what we’re all about,” which would it be and why that particular one?

Ton: That’s also hard because it would exclude other albums and, also, there’s not one album that covers it all, completely. I could name ‘Starlight Dancer’ as a prototype Kayak song, but half the album of that name doesn’t have that quality for me. It’s funny to think that with ‘Lyrics’, Kayak’s first single, I’d basically said it all already, and it took me 45 years to realise that! Okay, I’m overstating things a bit here, but it’s not entirely untrue.

Maybe if I could choose one song from every album, we’d come close. I always feel the total sum of what we’ve done is what makes Kayak good or bad. We’re circling around a centre point, constantly touching and discovering other places which are part of the Kayak universe. What’s in the middle? I have no idea!
With the release of their new album, it would be nice to know Kayak are on their way towards re-establishing their place in the music world. Seventeen is a fine piece of music and demonstrates that, whoever plays in Kayak, the spirit of the band will remain constant so long as Ton Scherpenzeel is there to guide everything along.