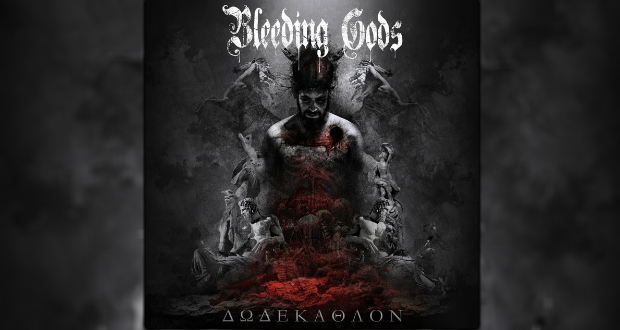 Dutch death metal five-piece Bleeding Gods have brought a feast of grandiose proportions to sink our teeth into, and by the gods is it juicy. Mythology and metal have always been well known bedfellows since the genre’s inception some 48 years ago. All manner of different cultures from across the globe have been interpreted via the metal curriculum but none more underappreciated as the classic Greek odysseys. Granted they may not have the same mosh appeal as the ultra-butch (and overly saturated) Norse gods, but dig a little deeper and there’s a whole Pandora’s box that’s begging to be unleashed. Flesh ripping beasts; envious gods who war for the heavens and shag anything that moves; mighty heroes who rise to stand amongst the pantheon of the immortals… I mean seriously, this shit writes itself.

The band [Mark Huisman, vocals; Ramon Ploeg, guitar; Gea Mulder, bass; Rutger van Noordenburg, guitar; Daan Klemann, drums] may not have had the impact they were looking for with their first album Shepherd Of Souls, however Dodekathlon is a punishing record seeping with ambition that could potentially send them on the right track. The album is a no bullshit retelling of the legendary 10 turned 12 labours of the demi-god Heracles (aka Hercules) as he seeks immortality and redemption for brutally murdering his wife, son and daughter. Not the lovable Disney boy scout you remember, eh? Following our hero on each trying step of his journey, we’re immediately submerged into this titanic world of ultra-violent melodrama that makes for an interesting take on a story that’s been told countless times over the course of thousands of years.

The scope of this album is pretty wide and appropriately cinematic given the nature of the source material. Bleeding Gods do this epic justice without holding back the gory details of our hero’s monster slaying antics on such tracks as ‘Multiple Decapitation’ and ‘Tripled Anger’ or his efforts at divine poop cleaning (Labour five: The Augean Stables; not pretty) summarised aptly on the doomy trudge of ‘Inhuman Humiliation‘. Showcasing a tasteful range of textures that help bring this concept to life, the music feels aware of itself knowing when to step off the gas letting the expanse of melody paint the picture for us.

Though the production is pretty squeaky clean, the impact still hits like a Cretan bull. Cherry picking the best bits from Amon Amarth and Behemoth, the five-piece binds it all together with a healthy dollop of traditional/symphonic metal that makes for a well-paced romp heavier than a minotaur’s hairy left bollock. By no means does this album reinvent the wheel or bring anything new to the table, it’s still engaging enough to ignite the imagination and get the blood pumping. Good escapist fun that doesn’t disappoint.

Dodekathlon is out now via Nuclear Blast.