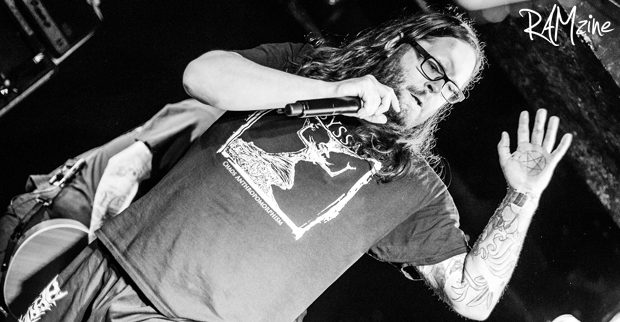 It’s an incredibly early start for the night gigs at the Camden Underworld in London which tonight, showcases three quality acts of death metal from around the world. With doors opening at 6pm, this doesn’t deter even the most die hard fans of UK death metal titans Ingested who requests that the crowd turn the place into “slamden town”. The crowd not needing to be asked twice eat up the energy that the band brings to the stage. Their set is tight and on form as they help get things warmed up with their crushing grove filled music that even the most conservative individual in the building tonight cant help nodding their heads. Bodies are moving, heads are banging and the fans make themselves known by screaming along. For such an early start, there couldn’t have been a better way to kick off the show.
After a quick equipment changeover, there is even more hair in the building now. More patch filled denim jackets and definitely a lot more t-shirts with unreadable band logos on, as Benighted take to the stage. The death metal crowd is alive and strong with this one and shows the French quintet much love ,as they fill the stage with not only their strong presence but also their sonic, brutal and unforgiving wall of sound. It seems that the band themselves are as happy to be here as the crowd who are at the point into the night where they are working themselves into a fun filled frenzy – so much so that even another fellow photographer couldn’t help but get involved in. Circle pits, crowd chants and sweaty fun is the name of the game here, and there are smiles all around including on the face of bassist Charles Twdo who seemed to have been having the most fun throughout the set!
Chaos ensues and the show is ultimately and quite rightfully stolen by The Black Dahlia Murder who kick things off earlier than expected much to the delight of a very packed venue now. Its their first show of two back to back London dates as ‘Receipt’, the opening track from the latest album Abysmal kicks off a set which is absolutely relentless from start to finish. Fans rush the stage, fans are crowd surfing and the band eats it up. Alan Cassidy makes it look effortless as he rips everyones face off with a punishing drum sound and undeniably tight playing to boot. Its a show where everyone is happy to be here including Trevor Strnad who needs to do very little at this point in the show to get the crowd involved. The Black Dahlia Murder are back after a quiet 2015 and rest assured they are back with a bang.
[huge_it_gallery id=”36″]
Share
Facebook
Twitter
Pinterest
Linkedin
Email
Print
Mix
Previous articleInterview: Alan Cassidy, Black Dahlia Murder
Next articleSteven Tyler reveals new track ‘Red,White and You’