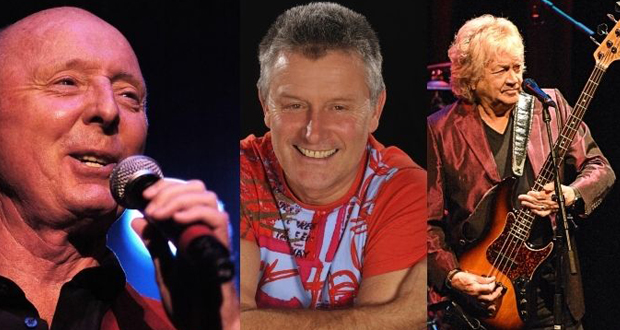 In the almost baronial splendour of Cadogan Hall, Sloane Square, Moody Blues bassman John Lodge brought his 10,000 Light Years band to London for a rare solo gig in the capital. The Moodies have always been a class act so it was only fitting he chose to perform with his band in similar surroundings. He’d already done a short solo tour in 2016, promoting his second solo album 10,000 Light Years Ago, and discovered there was an audience for him outside of his day job. He’d said of his first solo tour “I’ll always be a Moody but I love getting the chance to perform songs I’ve never done before, plus of course some classic Moodies songs”.

The set was a skillful balancing act aimed at satisfying those in the packed house who wanted nothing but Moody Blues tunes, and those who wanted to hear songs from his two solo albums. So, after a montage of clips from Moodies songs written by Lodge, and it’s only when you hear so many short clips together you realise just how many good songs Lodge has written, Lodge himself appears on stage and the band begins with ‘Steppin’ in a Slide Zone’, taken from their Octave album. Within the Moodies, Lodge shares front line responsibilities with Justin Hayward but, from the outset, it’s clear Lodge is enjoying himself, perfectly comfortable being stage centre and the sole focus of the crowd’s attention, as well as handling all lead singing duties. It’s also clear he’s surrounded himself with top-drawer musicians, including Duffy King on guitar and fellow Moody Blue Allan Hewitt on keyboards.

From his solo album, the band perform ‘Get Me Out Of Here’ and the title track ‘10,000 Light Years Ago’, and the Blue Jays ‘Saved By The Music’ draws a huge cheer. But it’s the Moodies songs which are the undoubted highlights of the gig. The recent 50th anniversary of Days of Future Past was recognised with two songs, ‘Peak Hour’ plus ex-Moody Mike Pinder’s ‘Evening Time’ performed from it. He dedicates the classic song ‘Legend Of A Mind’ to ex-Moody Blue and long-time friend Ray Thomas, who sadly died in 2018.  Other Moodies classics performed include the gorgeous ‘Isn’t Life Strange’, ‘Candle of Life’ and ‘Gemini Dream’, and they close the show with ‘I’m Just the Singer (in a rock ‘n roll band)’, and encore with ‘Ride My See-Saw’.

If this solo tour proved anything it’s, if the Moodies do decide to call it a day, there’ll be an audience out here wanting to hear the music from Lodge’s own albums, as well as his bands interpretations of Moodies classics.