Whenever the top alternative big ones comes up, 99 times out of 100, Overkill is in there and for damn good reason. Not only have they just released their 19th studio album The Wings of War, but they have had an energy in their live shows that blows just about anyone else off the stage, The Wings Over Europe tour would prove to be no different. 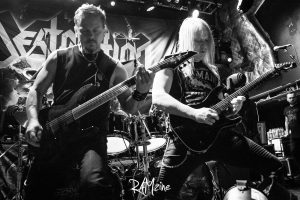 Kicking off the show are legends in their own right, Flotsam and Jetsam and justifiably, they had a packed venue from the off. Their most recent album The End of Chaos starting the show with ‘Prisoner of Time’ which soon had many heads banging and in their element. Jumping from their most recent to their debut album Doomsday for the Deceiver track ‘Desecrator’ shows how well they can write, all sounding fresh despite the 33 year age difference. The set is real tight with choice picks from a large back catalogue, but their energy and finesse on the tightly packed stage has the five piece in fine form. A perfect start to a perfect night that has everyone in the crowd back in their late teens/early twenties, some people just don’t need plenty of beer to have a good time. 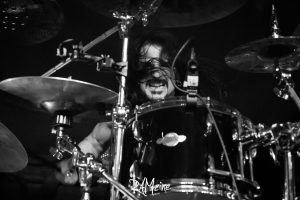 Destruction were next up and their presence is quickly made. Spikes adorn the drum kit, skulls on the mic stands and smoke machines right at the front of the stage, they do not hold back. While thrash was making itself State-side, Europe soon had Germany answering with their own “big four”, Destruction being one of those. Recently becoming a four-piece again, they battle their way through songs and try to make the most of what stage room they have. The huge Vocalist/bassist Marcel Schirmer covers the stage as he bellows down either side of the stage mics, a voice as large as the man himself, he is more than happy to be playing in one of the biggest cities of the tour, albeit in the smallest of venues on the tour, something that seems to be difficult for his size to get around as he hits his bass off the hanging monitors on the stage. Their headline worthy performance really takes the roof off the venue and they vow to return after the release of their upcoming album later this year on a headline tour just as energetic and at a bigger venue. We cannot wait. 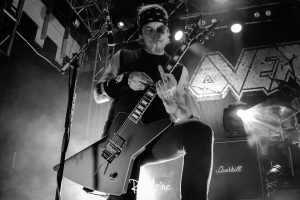 Overkill take off at full speed like a fighter jet launched off an airship carrier, how Destruction can get the crowd into such a frenzy is one thing, yet how that same crowd can still manage to shift it up another gear is something else. ‘Last Man Standing’ is the first of three tracks we are treated to from the new Wings of War release, and the crowd love it. ‘Head of a Pin’ finds its way into the main set also along with ‘Welcome to the Garden State’ in the encore. For a new release, not much gets its airtime, but there in lies the issue of having 19 studio albums of such quality to choose from and only so much time for a set, their previous release only gets one showing in the set with ‘Mean, Green, Killing Machine’ with only a few other albums getting more than one track of play. It matters not though, the hard part of choosing a set is done before the tour and the party is well underway. 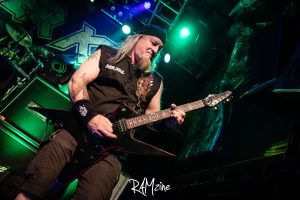 Hidden away on a huge riser is the latest member behind the kit, drummer Jason Bittner becoming a fully fledged member of the band had him stamp his mark all over the new album, and his live playing abilities are something to behold, cementing himself as a real solid foundation for the band to play against. Bassist D.D. Verni and fellow founding member Bobby “Blitz” Ellsworth dominate the centre stage, their timeless and irreplaceable foothold continues to be the driving force and fully deserves the devotion of the fan base. Flanking the stage are the insanely talented riff maestros Dave Linsk who never drops the ball once, his prowess and flashy guitar solo work are the stuff of legend and it cuts through like a knife tonight, while the rhythm guitar is completely owned by the much more active on stage Derek Tailer, a player for the camera and keen to make a moment worth saving for as many as possible (and I have absolutely no issues with being used for target practice when it comes to flicking guitar picks!) Not doing things by halves, they bring their own lighting rig out to play to really deliver the best show to can witness in such a small venue, it’s fair to say the ‘Wings over Europe’ Killfest tour only having the one stop in England, Wales and Ireland might have disappointed those that couldn’t make it, but for those that could, it seriously made for a potential gig of the year situation. Long may they continue!