Walking up to the Albert Hall Manchester, I notice a queue round the block of people, all there for one reason, to have a great time.

I have never been to the Albert Hall before and if you haven’t either I urge you to go. It’s so beautiful inside. I just stood by the sound desk looking up at the structure amazed at how I have missed this place before. 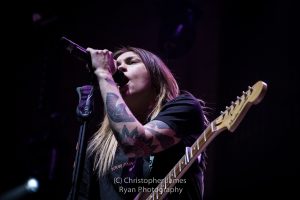 7.30pm hit and on stage to open is emo power punk band Hot Milk. This Manchester based band has a huge following here tonight. Jim Shaw and Han Mee are on lead vocals and guitar, Tom Paton on Bass and Harry Deller on Drums. These guys have an early Paramore feel and I am loving it. Han comes on the mic to announce that “despite them being a Manchester Band they have never played here before”, this is so unheard off and to be honest the first time I have heard of this happening! The crowd interaction is one of the best I have seen in a long time, asking us to “light up the Albert Hall” with our phones. This home band have a huge future ahead of them and I won’t be surprised if they are not headlining their own tour soon. After their set they went to their merch stand and interacted with the fans, again very rare for bands to do this these days.

Next on is the Scottish band of LaFontaines, I have been told by a few people that this band is one to watch as they’re very high energy. The band is made up of Kerr Okan (vocals), Darren McCaughey (guitar/production) and Jamie Keenan (vocals/drums). They kick off their set with ‘Up’ to a huge response from the crowd. The music is a mixture of rock and rap metal. Kerr asks us all “Can you understand me yet” in a very strong Glasgow accent, which the whole crowd cheers in response to him. During ‘King’ I took my eyes off the stage for a second to get my drink and he was gone! Kerr had jumped into the crowd and was lost in a sea of people which created a huge buzz around the venue as everyone was looking for him. As the set continued Kerr kept jumping from the stage to be closer to the fans which is such a great thing to witness. At one point we all lost him from the stage as he had made his way up to the top tier, where the seated fans where. Kerr told us all “…to go see the pretty man in there (points to the merch stand) and buy our album as we are f***ing poor”. Just this one line made me a fan! The set closed to ‘Asleep’ and the whole crowd including myself was blown away by their energy and how a big gig like this one can feel so intimate. In my opinion they blew everyone away!

After the set the band made their way to the merch stand, they had time to talk to the fans, as they walked through the crowd, people saying “amazing set” and “well done”, every time they heard this they said thank you.

It’s getting on for 9:15 when the lights dim, a bright pink neon at the back of the stage lights up and Deaf Havana walk on to a deafening cheer and kick off with ‘Fever’ to another huge scream. This is followed by ‘Mildred’ after the song finishes, James (lead vocals and rhythm guitar) talks to the crowd going into detail how living on a bus for five and a half weeks, and smelling things you never wanted to smell. This gets a laugh from the crowd.

After a quick scan of the crowd I notice that this place is packed, it was full before but now you can hardly move. The whole time Deaf Havana live up to their reputation for putting on an amazing show. When ‘Hunstanton Pier’ starts to play the crowd screams, cheers, and begins to Sing-along at the top of their lungs. To my surprise LaFontaines come back onto the stage and sing ‘Hell’ with Deaf Havana. This gets a huge cheer and makes this song my new favourite. A quick glance round and even the bar staff are singing along and having a great time. Another song from their latest album Rituals and a crowd favourite ‘Holy’. The crowd is alive with movement, signing back every lyric and you can not help but get sucked into the atmosphere in here. To end the night they played ‘Sing’ from their fourth album All these Countless night, which gets a huge response with everyone on their feet including the seated top floor. For the encore to ‘Sinners’ this just ends the night on a huge high.

All three bands blew me away with their stage presence and their passion for what they do. The Albert hall is a great venue for bands like this, even though it’s a large venue, it feels like an intimate gig and I for one love that feeling.