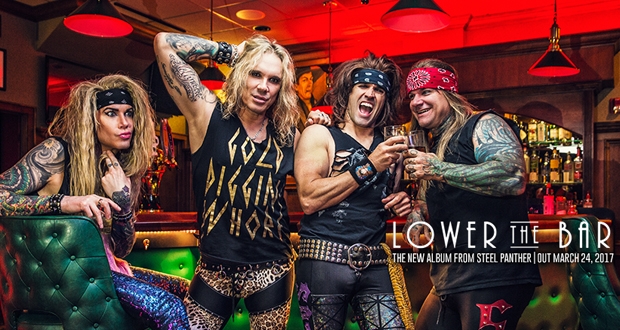 “The UK is our biggest fanbase… we can’t wait to get back over there” Lexxi Foxx, bassist of Steel Panther tells us. That makes sense, we don’t know many people who don’t find them hilarious, they hit our British humour right on the head.

I remember seeing Steel Panther for the first time, back in 2010 I received a text message from my fellow campsite buddy Lurch, to tell me there was a really awesome band playing the third stage and I was to gather everyone and join the rest of the group there immediately. It’s a great moment when you manage to reunite your whole campsite crew within the Download Festival Arena.

For the first time, we heard ‘Asian Hooker’, ‘Fat Girl’, ‘Community Property’, and the classic ‘Death To All But Metal‘. All in this tiny tent at Download Festival.

When asked about their first Download Festival experience Lexxi told us; “It’s such a big deal going back over there for us. Andy Coping (Download Festival Promoter) is just fantastic to us, he literally put us there when we were a new band and then brung us back out again. I remember we played the third stage or whatever and we had never been received better! Every time we go there we are reminded of how that really helped us out, being over there in the UK, its a big deal for us every time and the UK fans are amazing to us. It’s great to talk to you!”. 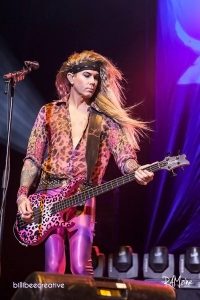 I remember Lexxi babbling on about the Sunset Strip at that first Download Show, which made me curious to look it up. It resulted in me making a trip over to Hollywood, Los Angeles to see them play their (at the time) residency at The House of Blues. After the show I went to the Rainbow across the road, and I met LEMMY! Cool shit happens at and after steel panther shows!

Telling this story to Lexxi he replies “WOW, man I was just at the Rainbow last night! We played the Roxy Theater next door and it was great! We had Dane Cook and Ron Jeromy there” He goes on to tell us that the band will be playing various places in support of the new record for the rest of the year including The Roxy on the strip, and The House of Blue in Las Vegas. Unfortunately, The House of Blues that once was on the Sunset Strip has now closed down.

Steel Panther have made their way onto bigger and bigger stages over the years, the second stage at Download, to Wembley Arena late last year. This summer we will see they take to Downloads Main Stage, just before Alter Bridge and Aerosmith.

We asked Lexxi if he ever envisaged Steel Panther playing those big stages, he said “No, never! We started as a cover band and we put out a record a long time ago, before Universal even got their mitts on it. We did it just to be a little bit more creative. Satchel and Michael write most of it, well those three write and they just tell me what to do, I just say ‘erm is this right?’, that’s basically my job… oh and to get plastic surgery and look bitchin’ as always I am.

So no we did not think about that. We started as a covers band making money years and years and years ago, and Satchel, Stixx, and Michael started writing songs, then we put a record out there. Thats when Universal came and said ‘hey were going to try this and see what happens’ and they put enough money into us, to spread us out enough, so people could hear it. 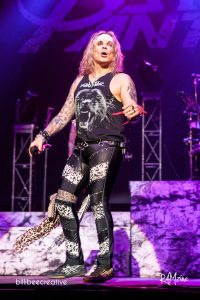 Now I can’t believe where I have been in this world, and how many people appreciate what we do, and love heavy metal and love that lifestyle. The way heavy metal is, you don’t have to know that persons name just to sleep with them, just like the 80s, bring the cocaine back, and heavy metal back! It’s healthy, it keeps us skinny, and you meet people through heavy metal too.”

In response to that statement, Lexxi says; “Wow…. I appreciate hearing that I do. Every band sells way more records then we do because we tell the truth, and when telling the truth is sweating and talking about things that people don’t ya know… the radio doesn’t play it etc. It is humbling to even be at the level we are now. My mum has a computer, I don’t have one, but I know that people can get music in different ways to what they did back in the 80s. So us not selling as many records as those people, we do more youtube and things like that. Even though we don’t sell all those records, I think that we are entertaining enough to be able to do that, it’s very nice that you think we would be able to.

We think that we can, but at the same time when there is band called Aerosmith.…”

I interjected to tell Lexxi that its Aerosmith last tour, so someone’s gotta rise up…. he replied “you’re right, yeah we kinda deserve it. I mean you were there a few years ago at Download when they played! All the years get all mixed up, as we all do drugs and stuff.”

He then tells us “We are excited for you guys to hear our new album which comes out on Friday, I think that this is our best record”. Steel Panthers new album Lower The Bar, opens with ‘Goin’ in the Back Door’, another standout track is ‘Poontang Boomerang’ – we asked Lexxi the story behind the track…

“Poontang Boomerang is about some girl that just would not leave, I mean we have all been in this situation. When you are in a band you have to be careful because it’s fun to party, it’s fun to put your penis in other girls vaginas. But at the same time you have be careful because some girls just don’t understand what that means, maybe it’s just a one night thing, maybe it’s up to us to explain what we are doing, but sometimes they just keep coming back, and back, around and around, and they just don’t get the fact that ‘hey that was fun, that was one night’, or ‘that was one year’, or whatever it is. They just won’t stop, it’s like a boomerang, you know from Australia, the thing just keeps coming back around.

“Wow erm… that is a good one because being in a band we don’t really have to try that hard, but for me, it would be to put a pillow… oh wait a minute that’s not a tip, lets see… I think being funny is great, I also think playing her some bitchin’ heavy metal tunes, and give her a bunch of alcohol.