This week we were given a unique opportunity to see a series of photographs by one of the world’s  most talented photographers. He captured the mood of the ‘Sympathy for the Devil’ year — 1968.

Michael Joseph, from South Africa, was born in 1941 and studied at the London College of Printing and Graphic Arts when he arrived in Great Britain at the beginning of the 1960’s. During his time at the university he was sent to Vietnam to photograph the war and, accordingly, was commissioned by many advertising agencies and made his name as a photographer.

Michael took the series of photos for the 1968 album cover ‘Beggars Banquet’ by the quintessentially English rock band The Rolling Stones.

The album was to be a return to the blues and roots-rock sound for the band who had been experimenting with psychedelic ideas. It would be the last Rolling Stones  album to be released with founding member Brian Jones, who plays sitar, tanpura, slide-guitar and mellotron on the tracks.

Most of the  photo-shoot was held at Sarum Chase, a mansion in Hampstead, London. Joseph was chosen to take the shots after the album’s original cover art ( a wall filled with graffiti) was rejected by the band. Other shots were executed in Swarkestone Hall Pavilion,  Swarkestone, Derbyshire.

Although the shots taken in and around the Swarkestone Pavilion were not used for the final album art, some pictures were used for the Stones’ first compilation album, Hot Rocks 1964–1971.

When we talked to Michael Joseph at Proud Gallery this week, he wanted to show us a new version of  “Smug Stones On Grass” that had never before been seen in public. The original coloured shot (which can also be seen at the show) was printed on a durable aluminum panel. “It’s amazing what can be done now…”  Michael Joseph told us. The new format gives the image a smoky, surreal feel.

Shots like “The Banquet” also taken at Swarkestone Hall Pavilion in 1968, depict Jagger as a Burlington Bertie type character presiding over a table laden with spoilt food. He perches above a yellowing suckling pig. Keith Richards reclines on a sheepskin, while Bill Wyman lurks by an anomalous mohican death-head. Charlie Watts skirts the scene in a skull hat and with what looks like a reefer in his fingers, while Jones — the most colorful and enigmatic character them all — takes a shot from a pewter mug and has a fluffy dog at his feet. The picture is filled with symbolism.

“We had to colour in the animals…”  Joseph told us. Apparently, the farmyard creatures, that give the whole scene a religious feel, weren’t seen as bold enough. This image is reminiscent of the Dutch Golden Age, with refined details, cryptographic emblems, gorgeous light and the rich coloring  you’d expect from someone like Jan Steen.

Talking about “Smug Stones On Grass” again, the photographer told us that it was a composition of images, a combination of multiple plates, with band shapes added later in the workshop. “Of course, this was all around fifty years ago, so the techniques had to be done by hand.” 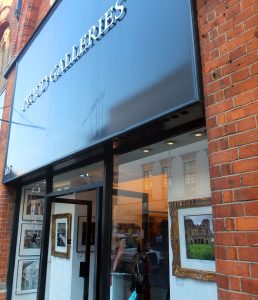 Visitors to PROUD Gallery, 161 King’s Rd, Chelsea, London, can view Joseph’s approach to refined art photography and see this set of inventive and unconventional images for themselves.

They capture  a classic period in rock ‘n’ roll history and reveal the world’s most famous band as they transcend beyond their first materializations.

The Proud Chelsea Beggars Banquet Exhibition runs until the 30th of July.