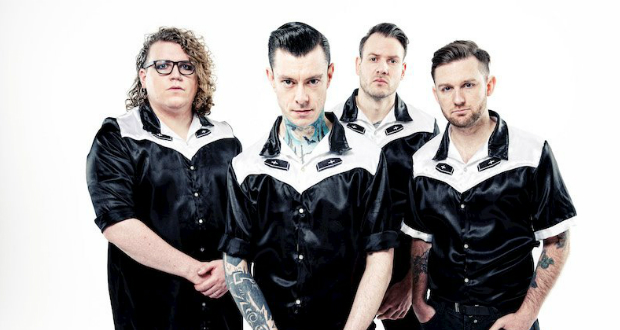 “When would you ever want to hear a song about people who’ve lived happily ever after? Never! You want to listen to the negative stuff, all wrapped up in a happy tune.” Funeral Shakes guitarist Simon Barker comes straight to the point when it comes to discussing the themes that the new outfit’s debut album and we’re not fully sure whether we agree with him or not.

I mean, James Brown quite literally released a track entitled ‘I Feel Good‘, all about happiness and, moderately obviously, feeling good, which is also a total banger that we love listening to.

Perhaps we’re looking a little too deeply into this particular quote?

Anyway, back to the matter at hand, let’s take a look at the self-titled debut album from Funeral Shakes. A twelve track lesson in modern day Brit-Rock that wouldn’t feel out of place in your local trendy high street clothes shop full of ‘edgy’ band-shirts, nor the sweatier small venues that seem to be in an ever dwindling supply in the UK.

It’s a relatively simplistic formula that makes up most of what’s on offer here. Trashy guitars, snarl and scream vocals, lyrics laden with angst and an overall sonic canvas that can only be described as very British. In fact, a fair likening would be to that of a heavier Frank Turner (and yes, before all you smart arses point it out, we know Mr. Turner has a hardcore band, but we’re talking about his solo work, so shush). Most notably, ‘Gold Teeth‘ and ‘The Motions‘ have that sense of urgent delivery that can be compared to Turner tracks like ‘Get Better‘, particularly when it comes to the pounding rhythms that create the rock solid foundations.

However, it’s worth noting that it’s when the band hit the petrol a little harder on tracks such as ‘Lightning‘ and ‘Circles‘ that things come truly alive. Moving slightly out of the mainstream radio friendly rock territory and into something that, although not dooming itself to commercial failure, add a welcome dose of the hard stuff. A dose that we would of loved to have seen taken by more of the album, but who are we to complain?

So, in summary, can we recommend Funeral Shakes from what we have heard from their first ever album? Yes, absolutely. It’s mostly made up of inoffensive, radio friendly rock music that’s rather pleasing to the ear. However, it is the slightly more aggressive, balls to the wall, in your face moments that really stand out and show off what these guys can do. So we’re gonna keep our fingers crossed that this is the start of something beautiful and maybe, just maybe, there will be a little bit more of the tougher stuff on album number two? 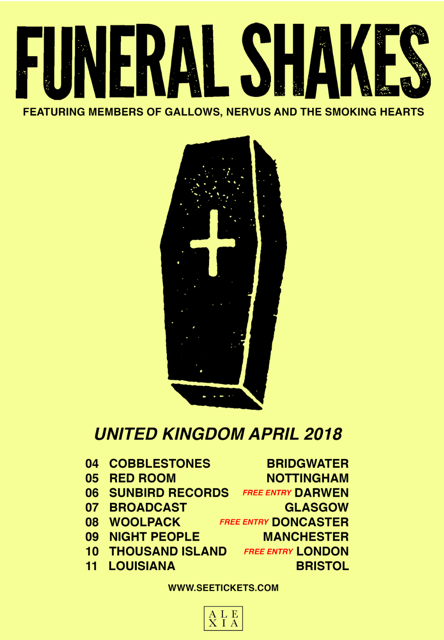