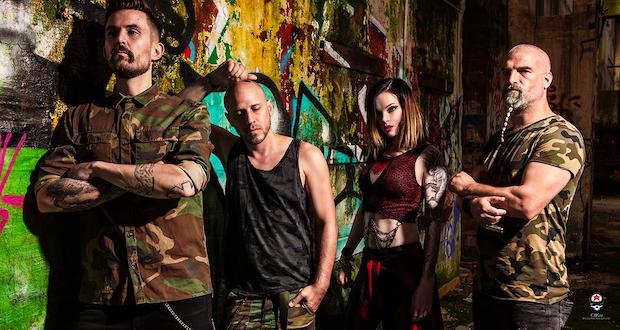 From being underground psychobilly legends to modern metal maestros, hailing from Hungary, The Hellfreaks have evolved as a band in the past 10 years. Now with a brand new album, God On The Run, they are more confident with their sound than ever. We caught up with vocalist Shakey Sue to talk about the new record as well as this pandemic, the rock scene in Hungary, being a female musician, and their change in sound.

How are things in Hungary during the pandemic situation?

There are restrictions on when and why we can leave the house, we can go to buy food or medicine, if you visit family you can just ‘hang out’ on the street. They have the right to fine you, but I have not seen anyone do it. Even so, I went to the park with our bass player, Domjan Gabi, and it was full of people – so I don’t know. I’ve been home for nearly 2 weeks and it’s not that easy to stay home I don’t think. I live in a small, dark flat so it feels longer than it is. Not the best. Here in Hungary people aren’t just losing their jobs but aren’t getting any support from the government too.

How does this affect you as a band?

I feel the effect will last much, much longer than we feel right now. A lot of tours and concerts are canceled. I suppose we are lucky because we had none planned, but because all these shows are canceled it’s going to be hard when these shows happen. The clubs and venues are too full anyway. Too many bands for too little number of slots. Here people won’t have the money to pay for gigs because they can’t even pay their bills.

Do you feel more people are discovering your latest album, God On The Run, now they are staying home?

These days you don’t NEED to tour to bring your music to people, it’s still very important, but I think we reach more people online. Thanks to things like YouTube, Spotify, and other similar platforms. Just looking at the Spotify stats, people have listened more to our music since the virus has hit. Just a little bit of positivity, because people are staying at home listening to music. Not sure if that will affect us more than anyone else though.

Are you happy with the feedback you have been getting for God On The Run?

Even before it was released, I was sure this was the best album we have ever written. And after the feedback was the same, it was an awesome feeling. We’ve got reviews from all around the world. Mostly 8 or 9 out of 10 scores. It’s a heavier album, compared to our other stuff. I like that because I feel that kind of music just has more balls. We’ve worked on it for almost 2 years, usually, when you make an album you are never 100% happy with it but this is the closest we are to being 100% happy about it. I’m really proud of this release, I think we are where we want to be with the band. We are really on the right path we wanted to be on now. It took 10 years but we are finally where we wanted to go.

You used to be known as a horror-punk, or psychobilly-style band, your new music is more metal – what do you describe yourself as?

We have been a band for 10 years, so we started as a psychobilly/horror-punk band and released two albums. They were both ‘billy influenced. When we started to work on our third album back in 2013, myself and some other band members were just bored of this style. I still enjoy it as a listener, but when it came to writing, I felt very limited in that genre. After two albums I was bored with it. I felt I was repeating myself and I was listening to heavier music anyway. We split for a while. It took me over a year to come to terms with it. We got an email from a festival in California to play. I don’t think they knew we split. I sent it to my drummer, it was a sign. Let’s figure out what we want to do and start again. So we went with a more punk-rock direction. We don’t have a double-bass in the band anymore. We played this festival in a new mindset, even though we were doing old songs. I’d say we are a ‘punk -rock -metal’ band with no portion of psychobilly.

You don’t hear of many bands from Hungary, like yourself, what is the music scene like there?

We are a small country and we are centralized, so many people move to the capital – Budapest. Like most countries, we have a great metal scene, every kind of niche, but a lot of the clubs that play rock music have closed in the last year. The big venues are there but not everyone plays them. I lived in Germany where there are clubs for metal, psychobilly, hardcore, and everything. We don’t have that here in Budapest.

Is it different now for a woman in a rock band, compared to how it was in the past?

Here in Hungary, women still get paid less than men do in most workplaces. As a punk-rocker, I am looking for fairness, and this is super unfair. Men and women are equal, you have the same brain. Whereas in music, I don’t feel there’s an inequality. It doesn’t matter to a promoter who is on stage, it matters what music we make. I’m always surrounded by guys and they have not handled me in a different way. Maybe it’s because I learned to handle things in a different way. It happens rarely but sometimes festival organisers may not take on another female-fronted band if they already have one. So is that a genre? Also sometimes reviews will compare us to other female-fronted bands that have absolutely nothing to do with us. Comparisons to Horrorpops or Kitty In a Casket are my favorites. We have nothing in common. We play in totally different styles, have a very different attitude, different messages, and use vocal techniques that couldn’t be more different. We’re not even using the same kind of instruments. So when I face comparisons like this, it only underlines the reviewer quality, because he compared us with his eyes and not by his ears, as the only thing these bands have in common is that they are women on the mic. Comparisons based on this would never happen in men’s world. Noone would take the reviewer seriously anymore if he would compare Serj Tankian with Justin Bieber.

So what’s next for The Hellfreaks?

We did plan to come to the UK at the end of the year, but I’m not sure what is happening now. At least we have more time to write now. I’m trying to see the positive side. Now all the punk bands are angry and enclosed, we will have some awesome albums next year.

God On The Run is available to stream and purchase now via the band’s website.