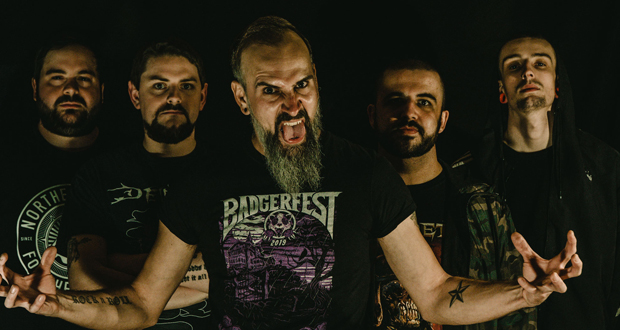 Merseyside five piece Deified perform a brutal sound with dark, angry, and nihilistic themes. All of which is abundant on the new track ‘Apotheosis/Rebirth’.

The lyrical content for the song boasts the theme of human annihilation, telling of a world wherein which “we’re no longer the alphas, kicked down from the top of the chain”. Hughes’ harsh vocal style is complemented well by the rest of the outfit to create a dark and captivating song that hits hard all the way from start to finish.

Deified have already experienced an array of success since their formation in 2013. In 2015, they won Bloodstock’s Metal 2 The Masses (Merseyside) contest and subsequently tearing up a set at Bloodstock Open Air itself. Following the success from Bloodstock Deified have since gone on to perform with death metal band Cattle Decapitation and thrash metal legends Exodus at various shows in the UK.

More can be found on Deified’s EP Anthrobscene in the latest issue of RAMzine, issue 26 ahead of the album’s scheduled release on May 29th 2020.

Grab a print copy of RAMzine here (just pay p&p) or read the new issue below for free!

Previous: Papaya Tree – Out in the Wash!
Next: The Hellfreaks “Even before it was released, I was sure this was the best album we have ever written”