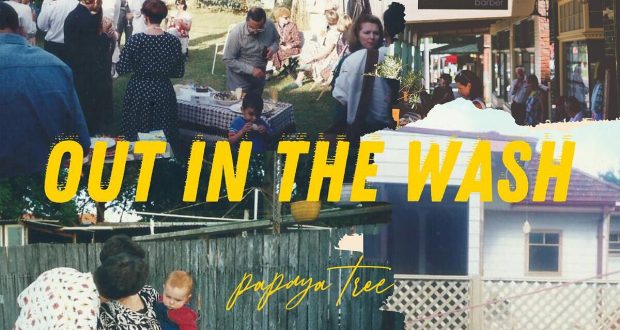 Papaya Tree – Out in the Wash!

Sydney six-piece outfit Papaya Tree has a new single out going by the handle of ‘Out In The Wash’.

Three years down the road, refining their ever-changing but forever unorthodox sound and influenced by their history as jazz students, indie contemporary producers and morticians, the single features a more mellow tune than 2019’s ‘Covered In Weeds’ – Including inspired synth, sauntering bass lines and a wistful chorus inspired by Cleaners From Venus, REM and Paul Kelly.

“Out in the wash is a song inspired by unrequited love lost; set in a inner-city laundromat, a close friend of the band met a girl while they were both waiting for their clothes to dry. They went for dinner, kissed, packed up their laundry and then never saw each other again, despite the boy returning to the laundry every week at the same time,” claim the band.

‘Out In The Wash’ can be streamed here and you can watch the video for it right here at RAMzine.

Tagged with: alt rock Out In The Wash Papaya Tree