The most rock and metal moments from Eurovision 2018 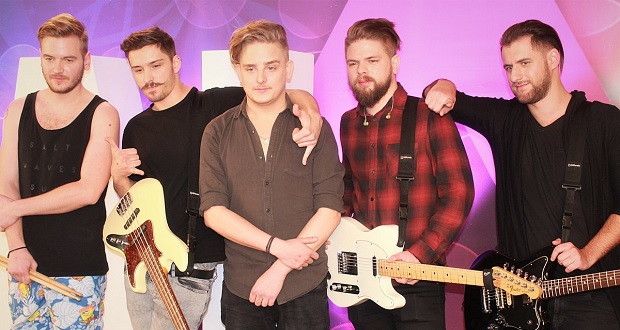 Eurovision. The song contest responsible for helping launch the careers of some of the biggest pop acts to ever take the stage. Be it ABBA (Sweden, 1974), Bucks Fizz (UK, 1981) or Celine Dion (Switzerland, 1988 … even though she is Canadian), the competition has an extensive reputation for launching chart-topping stars.

Every now and then, however, an act will come along that will attempt to challenge the preconceptions of what people might expect. 2006 saw Lordi (Finland) take home the prize, and since then a steady stream of more progressive acts have sought the same result.

Here are a few of the entries from Eurovision 2018, that may have otherwise found their way into our pages.

From the moment the eerie, droning hum signalled the arrival of Danish entry, Rasmussen (played by Tormund Giantsbane. Maybe.) there was an instant air of something unusual about to take place. Flanked by four, equally burly looking fellas, the song tells the tale of Viking legend Magnus Erlendsson, who later became Earl of Orkney, and was eventually murdered by his cousin in 1115. (Don’t say we never teach you anything)

Best described as ‘Viking Rock’, ‘Higher Ground’ takes elements of traditional old Scandi-Nordic folk, which incorporates sombre and haunting chanting, constructed around a simple, yet incredibly effective rhythmic base. This results in something really rather hard to pin down. Think Turisas and TYR, but on a much more diluted, but traditional scale.

If that wasn’t enough, Rasmussen (under the name Bon Jones) is also the front-man for Hair Metal Heroes, a 1980’s inspired glam rock cover band.

‘Higher Ground‘ can be viewed here:

Falling into the gap between classic and folk rock, ‘Mall’ does a stand out job of breaking the pop and electronica theme songs that make up the bulk of performances, without pulling too far in the other direction. It’s soft and anthemic, twinged with an unavoidable sense of melancholy, but in such a way that is not only engaging, but relatable and thoroughly enjoyable. Think early Goo Goo Dolls meets Breaking Benjamin, and you wouldn’t be far off.

Produced by Jim Lowe, who has worked with everyone from Beyonce and Taylor Swift, to Foo Fights and The Who, who lends a certain, indescribable quality that permeates throughout the track.

Bushpepa, before gracing the Eurovision stage, has previously supported Deep Purple and Duff McKagan , so yeah, there’s that too.

Not strictly speaking an out and out rock song, but bear with me.

Estonia lies just over the water from Finland, and the do share, amongst other things, something of a musical connection. So while this song is an incredible showcase of operatic vocal ability, it is underpinned with elements of symphonic rock. Add a few guitars and you could probably have something not too far from Nightwish.

And now for something completely different. Country Rock, a genre that is long considered to have peaked in the 1970’s is alive and well. In the Netherlands, apparently.

Unashamedly country in every way possible, ‘Outlaw in ‘Em’ doesn’t attempt to cover up or disguise its roots. The anthemic blending of country rock, alternative country and ol’ fashion Southern rock help to elevate this to something more, and turn this into something that is difficult to shake from your head long after it’s finished.

Just picture any advert for a second-hand Texan pickup truck dealer, and this could easily be its soundtrack.

And finally, something a bit more familiar to us here at RAMzine. Undoubtedly the heaviest track to enter a Eurovision final (perhaps since Lordi in 2006) AWS were a bold choice to represent Hungary, yet this didn’t stop them winning every stage of the competition to make it to Lisbon. Including both a public and a jury vote. The post-hardcore five-piece were always going to be considered nothing more than rank outsiders against the likes of Ireland and Sweden, yet took the opportunity without hesitation to showcase what they do best.

Following a more traditional metalcore set up, ‘Viszlát Nyár’ looks to take inspiration from acts like Bullet For My Valentine and I, Preval, with a blend of fast-paced rock, and downright brutal metal. Much of which would have been lost on such a big stage, yet the band’s energy made up for this, grabbing a lot of attention. So much so they were invited to perform at this year’s Wacken Open Air festival.

For many it must have come as a surprise, but for a few AWS may have been a welcome change, and could signal the start of something new.

‘Viszlát Nyár’  can be viewed here: