Daxx & Roxane are currently attracting the attention of UK music fans up and down the country with their boisterous yet stylish mix of Rock n Roll as they play a series of dates with Bad Touch. To celebrate we are giving away a limited edition red vinyl version of their 2017 album Ticket To Rock and two tickets to any chosen date on their current tour! 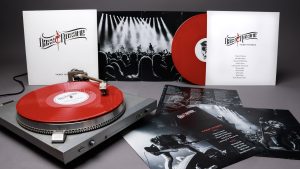 The band have been in the studio this month working on new material with Brit Award-winning producer Pedro Ferreira who has previously worked with The Darkness, Stereophonics, and Enter Shakari. Pedro Ferreira said “I haven’t had this much fun in the studio for a very long time. Daxx & Roxane are not just fun to work with they are a fantastic bunch of musicians and they totally rock.”

They release their limited special version on Ticket To Rock on vinyl’ through Justice Brothers on 31st October 2018.