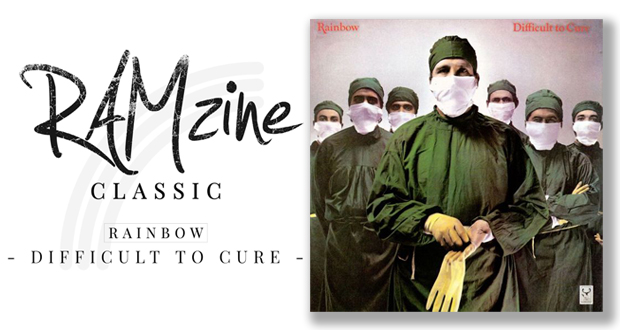 When former Deep Purple guitarist Ritchie Blackmore launched Rainbow in 1975 (the self-titled debut LP released that same year sported the moniker Ritchie Blackmore’s Rainbow while the following six studio albums were simply by Rainbow), one of the most unique and original-sounding hard rock/heavy metal entities of all time was spawned. Now, the thing about Rainbow is that no line-up ever stayed together for long and not one single constellation managed to write and record more than one LP. If you look at the Rainbow family tree, there are enough ex-members to form an army and topple a small city. Keyboard players would primarily be the ones to be replaced at regular intervals, and Blackmore was obviously restless and constantly searching for that magic combination of musicians.

Following three majestic and utterly impressive albums from the mid-to-late 70s fronted by the sadly missed Ronnie James Dio, vocalist Graham Bonnet joined Rainbow for 1979’s supremely confident and highly entertaining Down to Earth. Bonnet did tour the aforementioned album but when the band reconvened to start work on what would eventually transform into 1981’s Difficult to Cure, things quickly fell apart and Graham left the band. Legendary drummer Cozy Powell who had been with the outfit since 1975 quit following their performance at Donington in 1980. With Powell and Bonnet gone, Rainbow invited drummer Bobby Rondinelli and later on versatile singer Joe Lynn Turner into the fold. The 1981 version of the group then went ahead and produced a fresh-sounding, inspired output with an abundance of superb tracks that were begging to be played live. From stadium-sized rockers to dazzling instrumental pieces inspired by classical music, Difficult to Cure is expertly crafted and deftly executed.

The song material is strong and varied here, which is perhaps best exemplified by the toe-tapping barnstormer ‘Can’t Happen Here’ at one end of the spectrum and the elegant instrumental ‘Vielleicht Das Nachster Zeit’ at the other. Another stellar composition is ‘No Release’ in which there is a palpable sense of…er, well, sexual energy or something akin to sensual passion, I suppose. Regardless, it is a fabulous piece and one that seems to be somewhat overlooked in the band’s canon of great works. Noted music critic and author Martin Popoff is also quite fond of this tune: “A rumbling heavy metal rhythm emerges with Joe turning in an appropriately grinding, passionate vocal. Cool track, very underrated and seductively catchy come chorus time when Ritchie’s intro riff returns” (194). The hit single ‘I Surrender’, which was penned by renowned songwriter Russ Ballard, is an instantly memorable and hook-laden song, but it is arguably the least interesting (and most predictable) track to be found on the disc. ‘Magic’ is an uplifting tune boasting a glorious chorus, ‘Midtown Tunnel Vision’ is a bluesy delight, and the instrumental title track is a dazzling and unpredictable tour de force.

Difficult to Cure is rife with class and professionalism, which comes down to the fact that the musicianship is outstanding, the compositions are exciting and catchy, and there is a prominent sense of purpose and determination to the affair. It was primarily recorded at Sweet Silence Studios in Copenhagen, Denmark with the talented Flemming Rasmussen (Metallica, Saturnus) engineering the LP and bass player/songwriter extraordinaire Roger Glover producing it. The vocals were then recorded at Kingdom Sound Studio in New York. Although it could have done with a bit more punch and grit, the album hardly sounds or feels as dated as countless other releases from that period of time. On a side note, Metallica drummer Lars Ulrich was a huge fan of the sound of Difficult to Cure, which was one of the reasons why he was keen on tracking and recording Metallica album Ride the Lightning at this particular studio with the aforementioned Rasmussen handling the production in 1984:

Ulrich had suggested Rasmussen because he liked the producer’s work on Rainbow’s 1981 album Difficult To Cure. Being back in his old home town was hardly a drawback for the drummer, but there were other benefits too. Sweet Silence was cheaper than comparable studios in the United States and there were guest rooms where the band could stay while they worked on the record. (Wiederhorn, ‘Ride the Lightning’)

2021 marks the 40th anniversary of Difficult to Cure and since it such a cracking good listen, it is time to re-evaluate, re-examine, and, most importantly, celebrate it. Is it an overlooked classic and a marvelous gem that pretty much slays from beginning to end? To these ears, it is a potent and hugely satisfying listen that still retains its spark and vigor all these years later, and although I would argue that 1982’s Straight Between the Eyes is the peak of the Joe Lynn Turner era, Difficult to Cure is hot on its heels and right up there with the best of them. It may not be entirely flawless, and Rainbow did produce more musically cohesive albums than this one, but it is definitely a kick-ass classic, if you ask me. Turner usually performs a few songs from the album whenever he tours with his solo act, and when I had the pleasure of attending a gig by the Rainbow offshoot group Over the Rainbow at Kulturbolaget in Malmoe (Sweden) back in 2009, those guys included ‘Can’t Happen Here’ and ‘I Surrender’ in the setlist and the crowd went fucking bananas. The current incarnation of Ritchie Blackmore’s Rainbow aired ‘Spotlight Kid’ and also the aforementioned ‘I Surrender’ on some of their recent tours and even released a re-recorded version of the latter in 2017. However, the 2017 rendition of said song was quite the underwhelming affair despite Ronnie Romero’s impressive vocal talents.

Difficult to Cure is simply a riveting musical experience that deserves more praise and a bigger audience, so dig out that well-worn vinyl of yours or look it up online and lose yourself in its pulsating rockers, the sheer quality of the melodies, and the fact that this was a fantastic albeit short-lived line-up that could rock with the best of them.