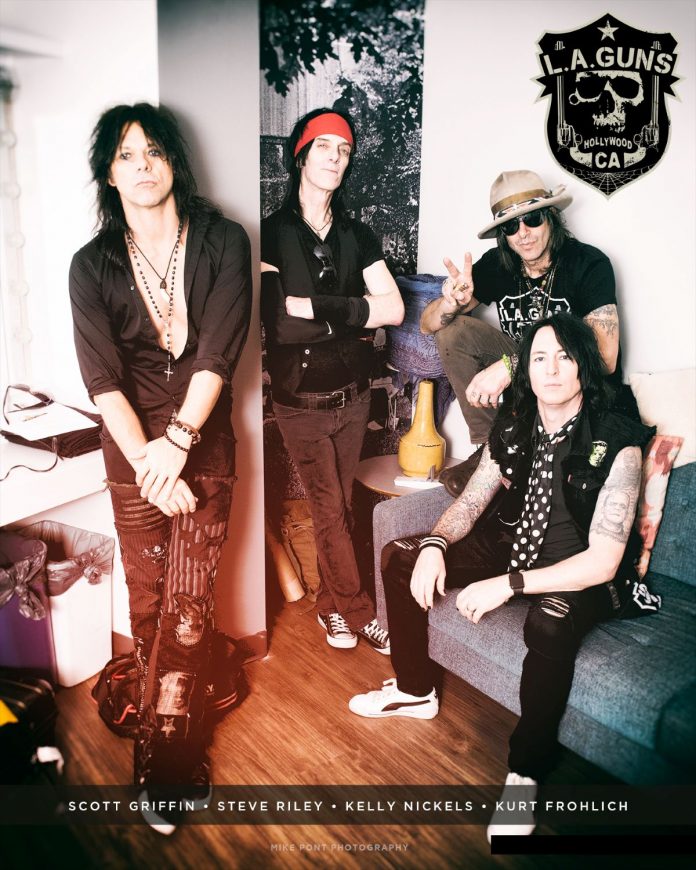 L.A. Guns, the infamous Sunset strip act released a new album called Renegades, at the tail-end of last year on Golden Robot Records, and has released plethora of singles in support of it, the latest being ‘You Can’t Walk Away‘ that’s out now.

L.A. Guns was formed in 1986 and has pocketed three platinum albums among the cache of recordings they’ve brought out, and toured alongside AC/DC, Iron Maiden and Def Leppard in their heydays. There have also been numerous line-up changes and two versions of the band working their streetwise sound.

The Kelly Nickels, Steve Riley, Scotty Griffin and Kurt Frohlic version of the band are responsible for Renegades, and in preparation for its release had been bringing out not only singles but behind-the-scenes making of videos from it during the course of the year.

“Almost a year ago to the day I took a plane from New York to LA to record this album,” said Nickels. “We all put a lot of work into it we’re super proud of it. It’s the best recording experience I’ve ever had… We hope it helps you get through the day a little easier.”

Here at RAMzine we either feature videos to the four singles thus far released, or links to go view them yourselves, including the the making of Spring release ‘Crawl‘.

Second single ‘Well Oiled Machine’ received cover placement on Spotify’s Hard Rock playlist and you can view its video by clicking here. Next up was title track ‘Renegades’ that you can stream/buy, like all the others right here. The track is intended almost as an autobiographical representation of the band and you can catch hold of the video here.

Christmas time, L.A. Guns brought out ‘All That You Are’, and you can get to watch the video right here at RAMzine.

Latest single, ‘You Can’t Walk Away’, is a ballad and has developed a deeper meanings since it was first written.

“This is a song I wrote with a friend, Tommy Holland, over 35 years ago in Chicago,” said Steve Riley of the single.

“I brought it to pre-production for the Renegades album and the band finished it with a new chorus and some other minor changes. We are very proud of it and hope it follows in the footsteps of ‘Ballad of Jayne’.

“We can’t wait for you all to hear the full album Renegades. We are so proud of it and we hope you all have a great time rocking out to it. Hope to see you soon on the road. In the meantime. Enjoy the album.”

You can stream/buy L.A. Guns‘ Renegades album by clicking here. Fan bundles can be bought here and it is also available at the following outlets: iTunes, Spotify, Apple, JB Hi-Fi, Sanity and Amazon.