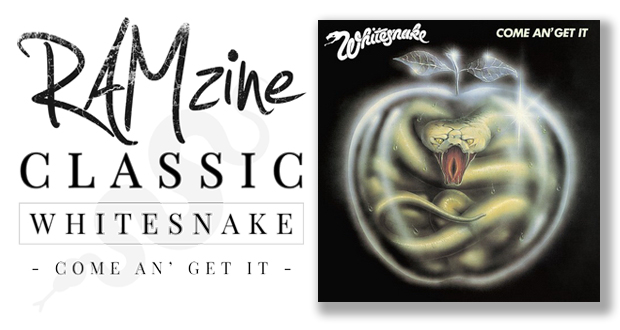 Legendary hard rockers Whitesnake surely need no introduction as they have been at it since the late 70s and released several albums that are widely (and rightfully) regarded as classics. Personally, I am extremely fond of the early blues-based records ala Trouble (1978) and Ready an’ Willing (1980), but another LP that I cherish and treasure is 1981’s Come an’ Get It, which (you guessed it) is turning forty years old in April 2021. The latter was the first album by the group that I ever bought (it was a cheap, well-worn secondhand copy in some dingy store in Denmark) and so this one occupies a special place in my heart for two very specific reasons: A) it was my introduction to Whitesnake and therefore carries a sense of nostalgia to me and B) it is a fabulous and incredibly well-written record that always brings a smile to my face whenever I spin the disc. Let us discuss it in more detail below, shall we?

Come an’ Get It, which was recorded at Startling Studios in England, boasts a musically superb line-up consisting of the dangerously cool guitar duo of Bernie Marsden and Micky Moody, the inhumanly skilled combo of Deep Purple virtuosos Ian Paice (drums) and Jon Lord (keyboards and Hammond), the four-string magician Neil Murray, and, obviously, THAT voice, Mr. Coverdale himself. What could possibly go wrong? Judging from the quality of Come an’ Get It, absolutely nothing.

A quick glance at the Whitesnake discography reveals that Coverdale hardly ever stayed still following the demise of Deep Purple in 1976 and that he kept busy in the late 70s. His two somewhat low-key solo LPs, namely White Snake and the atmospheric and melancholy Northwinds, came out in 1977 and 1978, respectively. David then launched the first proper version of the band Whitesnake and released the Snakebite EP followed by the delightfully bluesy and wildly exciting Trouble in 1978, both of which were recorded in a small, sweltering studio in London’s Tin Pan Alley. The next few years saw the group release Lovehunter (1979), Ready an’ Willing (1980), and the phenomenal Live…in the Heart of the City, which is unarguably one of the greatest concert performances ever committed to tape.

Come An’ Get It also marks Deep Purple drummer Ian Paice’s second studio album appearance with Whitesnake, and what can be said about the legend that has not already been said? Nobody plays the drums like Paicey – that is just a fact and something akin to a law of the universe. When speaking to Eon Music, David Coverdale remarked that “[Ian Paice] and Neil Murray, dear god, they nailed it, as you can hear on ‘Ready an’ Willing’ (1980), and ‘Come an’ get it’ (1981) . . .”.

Although one could argue that Come an’ Get It is neither the strongest nor most potent Whitesnake album in existence and that there are other works by these guys that are even more extraordinary and memorable, it is an amazingly fine and classy slab of bluesy hard rock with plenty of colour and finesse to it. But is it a classic or merely a hugely entertaining LP then? Well, to these ears it most certainly warrants the status of being a classic in that its compositions possess a timeless sense of groove and swagger that is as invigorating and spirited as it was forty years ago. The material still holds up well today and sounds marvellous; the epic ‘Child of Babylon’, the funky ‘Girl’ and ‘Hot Stuff’, and the gritty delight that is ‘Hit an’ Run’ are the stuff that rock ‘n’ roll dreams are made of. The moving, melancholy pieces that are ‘Lonely days, Lonely Nights’ and ‘Don’t Break My Heart Again’ are stunning too. Again, Come an’ Get It might not be as raw and vibrant as Trouble or as ridiculously memorable as Ready an’ Willing, and it is undoubtedly a more polished and poppy affair than its predecessors, but make no mistake; it is way up there with some of the best hard rock releases from the early 80s. As is always the case, not every critic or fan agrees; Classic Rock’s Neil Jeffries stated that ”After 1980’s double Live… In the Heart Of The City European hit ’Snake might have gone global – but 1981’s Come An’ Get It just failed to deliver, despite the single and subsequent live favourite ‘Don’t Break My Heart Again’ reaching Number 17 in the UK. That, ‘Child Of Babylon’, ‘Would I Lie To You’ and even ‘Wine Women And Song’ (now there’s a DC mission statement) aren’t bad songs but the others simply slither by rather sink their fangs.”

Come an’ Get It reached a respectable position in the UK charts and as guitarist Bernie Marsden says, “I thought that the album itself was pretty fine. It went straight in at No. 1 here in the UK. An instant success; No. 1 the day it came out, so that’s kind of hard to disregard” (Popoff, 80). Actually, that is not entirely correct as it was in fact number two in the charts, but you get the picture. Bassist Neil Murray has also stated that he is quite proud of the record: “. . . as far as favourites go, it’s hard for me to choose between Ready an’ Willing and Come an’ get it. I like them both a lot . . . But for my own enjoyment I would probably choose Come an’ Get In” (Popoff, 83). Going back to Marsden’s assessment of the LP, let us end with a quote of his: “With Come an’ Get It, we were probably at our peak creatively” (Popoff, 87). You know what to do – play this one loud!