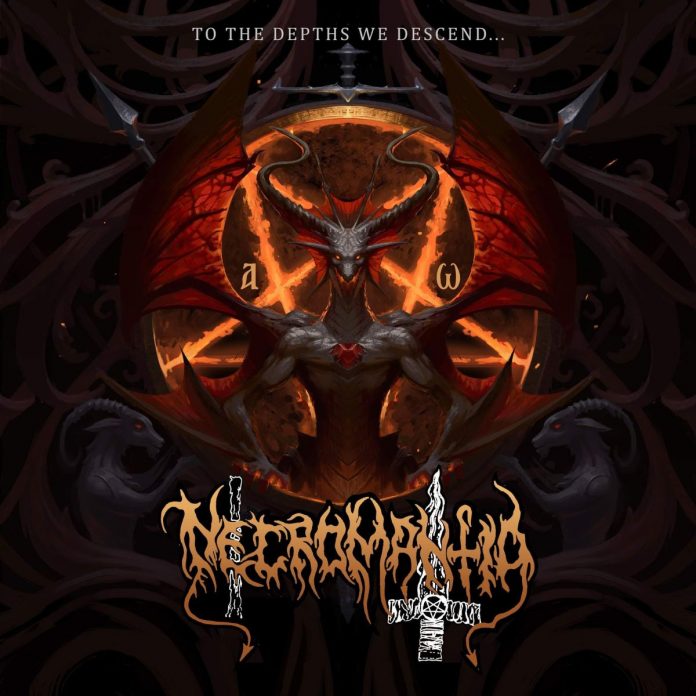 Iconic Greek black metal band Necromantia announce what they’re calling their final album with To the Depths We Descend, intended for release this Autumn.

The band was created in late 1989 by two like-minded individuals: The Magus (bass/vocals) and Baron Blood (8-string bass). Their aim was to create original, powerful and innovative diabolical music, replacing the usual six string guitars with an eight string bass and joining forces with various musicians in drums, lead guitars, keyboards and innovations in order to complete their magically intended formula. Their first recordings soon earned them cult status.

Never hesitating to use “non-metal” instruments like saxophone, percussion etc; in addition to their standard metal orchestrations, option made them unique and established their own individual sound.

They have released three demo tapes, four full albums, one mini album, one split album, one split EP and various 7” eps and re-releases, keeping darkness as a compass and creating music for almost three decades.

In 2019 Baron Blood departed from this world. The Magus decided to dissolve the band but not before creating a last opus as a tribute to his lost brother in darkness, and so along with George Emmanuel on guitars and keyboards and Yiannis Votsis on drums, To the Depths We Descend will become available here, here, and here.

“As we are approaching the final stage of production, I think it is time to reveal the cover of our ultimate album. I wanted the cover to have a strong reference to our first albums in combination with our draconian sigil.

“Once again I employed the great talent of Harshanand Singh. He managed to capture our primal daemonical essence and not only that: the Great Dragon itself spreads its wings and welcomes the anima of Baron Blood and the spirit form of Necromantia in the abysmal realms.”