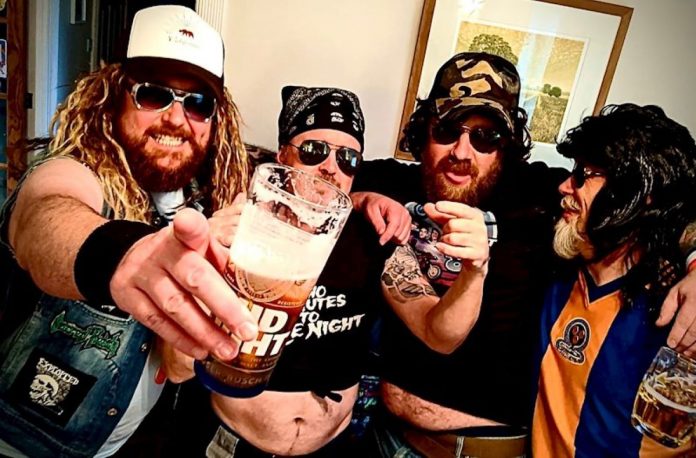 Ireland’s Trucker Diablo release new album Tail End Of A  Hurricane  on 7th May and its been preceded by three singles.

First out the box was the feel good tune ‘Rock Kids of the 80s’, that was actually recorded late 2019, with a view to getting the album out early 2020, but as we know, the world changed! It did make a  live debut at Planet Rock’s Winters End Festival in February of that year however.

The band also went into a studio in Liverpool that weekend and demoed an idea called ‘I Am Still Alive’, a song, that documents the current pandemic and is intended to be a reminder of how resilient we are. And that one came out as their second single. Its most recently been followed by ‘Slow Dance’.

This album is said to takes a few diversions musically, with an almost punk attitude and feel to ‘Insects’ with its social commentary on how we’re all just worker insects feeding everything to the corporate machine for them to steal our being. While closing track ‘Bury The Ocean’ was the last song written for the album, and its crushing guitar builds to an epic ending as sitting reminder that while times are tough now, we will get out the other side of this situation.

Big riffs, big choruses and big performances are promised, and the you can pre-order the album here and via Bandcamp.

In the meantime, catch the videos to ‘Rock Kids of the 80s’, ‘I Am Still Alive’ and ‘Slow Dance’ right here at RAMzine.