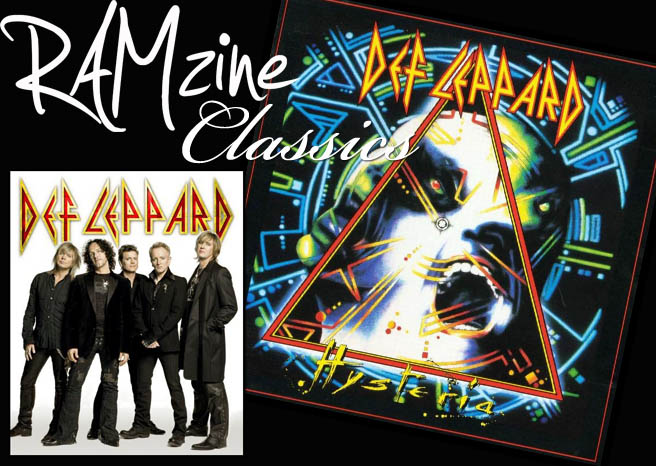 When I was deciding which album to review for this fourth instalment of the RAMZine Classics series, I enlisted the help of my friend “Thimbal”. For him there was only one choice. He assured me with great gusto that this band were not only the “BEST BAND EVER” but that this was also the “BEST ALBUM EVER”. The band was none other then… Def Leppard, with their legendary album “Hysteria”. 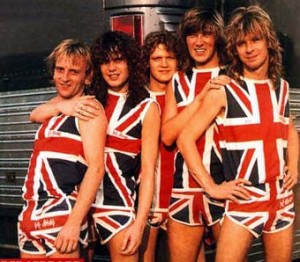 Emerging from the British rock scene in the mid 80s, Def Leppard are one of the biggest bands to emerge from our shores. Their catchy rock music infused with pop melodies and hooks has led to them consistently selling out stadiums for nearly 30 years. This album “Hysteria” was released at the height of their popularity and was the first album they recorded since drummer Rick Allen lost his arm in a car accident. He continued playing drums even with his impairment, utilising a system of foot pedals to create the snare drum and extra tom sounds. He is a real inspiration as a person and a drummer.
Regarding the album itself, it opens with the incredibly catchy “Woman”. The opening guitar figure is wonderful, with guitarist Steve Clarke on top form, playing a hook, which instantly sticks in the listener’s head. This song on the whole is a brilliant opener to the album, and sets the tone, showing the listener that this is what Def Leppard is all about.
The next song up is the brilliant “Rocket”, a song which lyrically utilises space metaphors to describe the excitement of meeting that girl, describing it as a “satellite of love” which is utter genius. Vocalist Joe Elliot really excels on this song, his sweeping vocals driving the song along with Allen’s electronically gated drums.
Following on from these two excellent rock and roll songs is the unbelievable “Animal”. This song is one of my favourites on the album and has one of the best choruses I have ever heard anywhere. The theme of the song is animal attraction applied to humans, with a circus twist, which is just fantastic. The way the bass guitar underpins everything is wonderful and the layered vocal chorus works brilliantly. 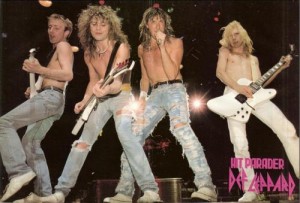 Next up is the only real true ballad on this album, the emotional “Love Bites.” The raw emotion of the song shines through with Elliot’s vocal range really on display and the way he hits the notes he needs with such consummate ease is a real lesson to any up and coming singer.
Following on from this slice of genuine emotion is one of Def Leppard’s best known songs, the instant classic “Pour Some Sugar On Me”. This is a wonderfully fun song, with its catchy guitar riff and groove-laden drums leading the way and the anthemic chorus projecting with utter class, burying its way into the subconscious of every self-respecting rocker anywhere. There is a reason some songs transcend genres, and Def Leppard certainly did so with this song.
Up next is the ultimate positive rock and roll song, “Armageddon It”, which is a testament to single minded determination, aka “I’m-A-Getting It”. This song is another of my favourites on the album, with its infectious riff pushing the song along at pace. The chorus is a real sing-a-long, with memories conjured up of good times with friends while singing it! A fantastic song to keep the album driving along.

Up next are three less known songs on this album, “Gods of War”, “Don’t Shoot Shotgun” and “Run Riot”, three fantastic rock songs which really keep the album going. The bass intro to “Gods” is simple, yet amazing and really tees up the song for its driving rock feel. “Shotgun” and “Riot” continue this, bringing real rock and roll attitude to the album, which keeps it fresh and gives Def Leppard a fantastic musical identity. 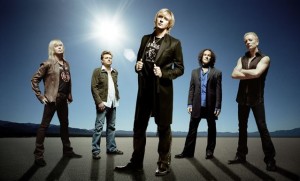 Next up however is the fabulous title track, “Hysteria”. This song has the feel of a ballad, yet it could be more accurately described as an anthem. The verse and chorus are wonderful, with Joe Elliot’s vocals on top form and the clean guitar in verse is perfectly matched to the vocal melody. This is a true highlight on the album and was the track which surprised me most of all.
The album’s penultimate track “Excitable” begins with a menacing voice asking “are you excitable?” This is a fantastic touch and the song develops into a fantastic pop-rocker, which is one of the most underrated songs on the album. Closing the album is the heartfelt “Love and Affection”, which has the lyrics of a ballad yet the attitude of a rock and roll song. This combination is what makes Def Leppard so lethal as a band and why they have stood the test of time.
In closing, this album is simply a masterpiece. The way that all the musical elements link together to create an unbelievably complete album of rock covering all bases. Everyone can find something in this album that they like. According to my friend Thimbal, this is the “BEST ALBUM EVER.” You know what: I don’t think he’s far wrong.

FOR FANS OF: Aerosmith, Poison, Whitesnake