If you have a conversation with a hardcore fan of any band in the world, 99% of them will most likely come out with the answer “their early material is better.” With Motorhead, who are the band that started speed metal and are fronted by the often-imitated-never-beaten legend that is Lemmy Kilmister. Their early material contains some of the songs which influenced the entire heavy metal scene. They shaped bands like Slayer, Metallica and Megadeath, with their speed and aggression serving as the main inspiration for the wave of thrash metal coming out of the Bay Area of San Francisco, California in the mid-1980’s.

Onto the music itself, and the collection I received is put together fantastically. The tracklist is astounding with many classic Motorhead tracks evident. The packaging (though I did not get to experience a rare physical copy of this) comes in a collector’s edition package and includes eight albums, seven singles and a limited edition 7″ vinyl, with a metal Motorhead warpig bust.

The first standout track of the collection is the fabulous “Overkill” which is pretty much the song which started speed and thrash metal. The furious double bass drum work of Phil “Philthy Animal” Taylor opens the song in a furious fashion, and when the main guitar riff kicks in, the song just absolutely reaches legendary status. Lemmy’s signature snarl really tops off the song and adds that extra element of aggression that has become the signature of Motorhead’s sound.
The next highlight of this particular collection is the awesome “Please Don’t Touch”, a song that features members of the all female 80s metal band Girlschool. The vocals of Lemmy and Kim McAuliffe really flow together well, with the latter having quite a spiky vocal style. The song’s punk influenced energy shows Motorhead’s varied style even though they are often pigeon-holed as just a speed metal band.
Following on from this collaboration masterpiece, the next track which really grabs my attention is the classic rock influenced “Killed By Death”. This song epitomises why I think Lemmy is a god of heavy metal. After the opening wailing guitar solo, the first lyric of the song is the very politically correct “If you squeeze my lizard, I’ll put my snake on you.” That is a piece of utter genius and shows Motorhead don’t take themselves too seriously. This song really shows their classic rock influences and the flowing structure epitomises this. Again, it shows their versatility as a band.
The final highlight for me is Motorhead’s signature song: “Ace of Spades.” Every single person who likes rock music knows this song. It is one of the most well known songs in the world, and it’s distorted bass guitar intro rumbles with sheer aggression to notify the listener of what is to come. The sheer pace of the song had rarely been heard before by a mainstream audience, and it catapulted Motorhead to the minds of many.
In closing, this collection looks like one for the die hard Motorhead fan. The bonus CD’s and vinyl are all fantastic collectors pieces and for anyone who loves Motorhead then this is the ideal purchase. Their songs stand the test of time, and I believe that their impact will be felt around the rock music world for a long time yet. 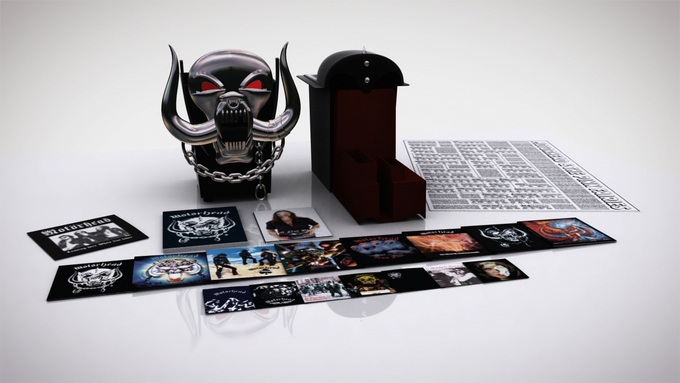 The collection is released on 19th November and retails £277.00.