Deliberations From The Shire with Mike James – Execration 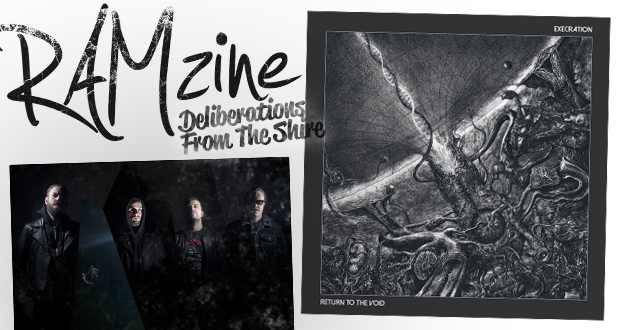 This is Execration‘s third album and they have certainly found their sound now although shorter than the previous two, this album builds on the sound and feel of their sophomore album in 2014. There is something for everyone on Return To The Void be that Black, Thrash, Death or in places Heavy Metal. For me, the back bone of this album is the pounding rhythm section expertly played by Cato Syversrud who seems to be a beast on the skins. There are some very intense moments throughout the 42 minutes of this release but in standard Execration style the mood and tempo can change to portray a different atmosphere, even the two instrumental tracks are something to behold. Lyrically speaking Return To The Void captures a plethora of topics from outer space, dreams & philosophical musings on time.

Stand out tracks include the title track of the album and for me, ‘Nekrocosm’ conjures up a darkness that hits hard with driving drums over haunting atmospherics and subtle guitar solo. I also have to mention the album artwork (pictured above) you’ll be blown away.

Execration’s Return To The Void is out 14th July 2017 via Metal Blade Records.