After a five hour car journey with two pit stops and sweltering heat we finally made it to UK Tech Fest at Newark Showground. Being my first time at the festival I had absolutely no idea what to expect, I had heard a ton of great reviews, but was wondering if they were over exaggerated by fans of the festival. Much smaller than originally thought, however as soon as you walk in the vibes get to you straight away, the most chilled festival. By the time we had unpacked, set up the camp and checked out the festival there were warnings of a huge storm expected and for everyone to move their tents into the hangar. We grabbed food and sat inside whilst three months worth of rain poured down in a hour and huge thunderstorms occurred. In the gap of the storm we risked walking over and catching the last 15 minutes of Chelsea Grin which was extremely heavy and ‘in your face’ as such, a first glimpse of what this festival is, incredible. I later heard that the main bar area and merch stands next door were closed due to flooding inside and that it was very close to Chelsea Grin being taken off stage. We risked going back to the press area to chill and drink, which we later regretted when we ran for twenty seconds and was dripping wet to the bone, a change of clothes was never more needed. By this time you could already tell that the festival was exactly what people had made out, it was wonderful, and the people there were so lovely.

After four hours sleep due to a noisy bunch camping next to us it was time for Friday to happen. I saw a few bands during the day, but for me Martyr Defiled stood out the most. Their riffs and harmony’s were on point and there energy was just out of this world, definitely a band to go and see if you have the chance. Not long after was my favourite band, Hacktivist. I always feel like I have a hugely bias opinion towards these guys as they are my number one, however you could tell when you were there that everyone else was thinking the same. The atmosphere was so intense I was in awe. Full of circle pits and head banging, the biggest reaction to date I have seen from a crowd for them. Unfortunately during this set a circle pit fell into me and I cracked a few bones in my wrist, nothing major but also meant I then missed a few bands afterwards and had to go to the minor injuries unit in Newark town.

I managed to catch a few songs of The Black Dahlia Murder and oh my was it insane. I have never heard anything so heavy in my life, it was bone crushing, and the lighting messed with my eyes. I definitely had a out of body experience with them playing! For the after party in the hangar Death Remains played. I have seen them once before in my hometown of Exeter, and loved them, and again I did this time too. Barry’s vocals are just always on point, and they are my type of metal. They always play spot on, the riffs, vocals, drumming etc. Couldn’t ask for a better band to end the night with, will always remember these guys every time they play, you can’t forget them! Only downside was that it would’ve been nice to see them upon the actual stages rather than in the hangar for a few reasons e.g lighting.

Woke up on the Saturday, very achey, tired and slightly hungover… not used to this camping malarkey. With cup after cup of coffee and a ‘to die for’ bacon and halluomi bap from the Shisha Tent it was time to get up and watch some more bands. I had never seen or listened to Exist Immortal before despite being spoken about very highly, however once I had even seen half a song I was already a huge fan. It was so satisfying to watch their set, crushingly heavy modern prog mixed with the technical parts, and the guys put on one hell of a stage performance. Then it was time for The Colour Line, again a band I had heard of but not listened to. It was one of the bands last shows, to everyone’s disappointment, and Sam the vocalist was filled with joy and energy from performing. You could tell that this meant a lot to him and the band, through crowd surfing, jumping up on speakers etc. Musically sound and by the end of the songs was very disappointed that I wouldn’t get to see them again. However I did end up meeting him later in the night, had a conversation, and he was one of the loveliest people I met there, I wish them all luck in the future they will be missed, and the crowds reaction showed it, even got encored to play another song. It was a lovely feeling knowing the passion and the upset from the fans was there. Later in the evening we met up with our friends and went to watch Textures, it wasn’t for me at all. They played well, and had some great tunes, but for some reason I couldn’t enjoy it, couldn’t quite click on what it was. I could tell that they were playing very well and sounded excellent live, everyone else seemed to be loving them, just couldn’t get myself there. 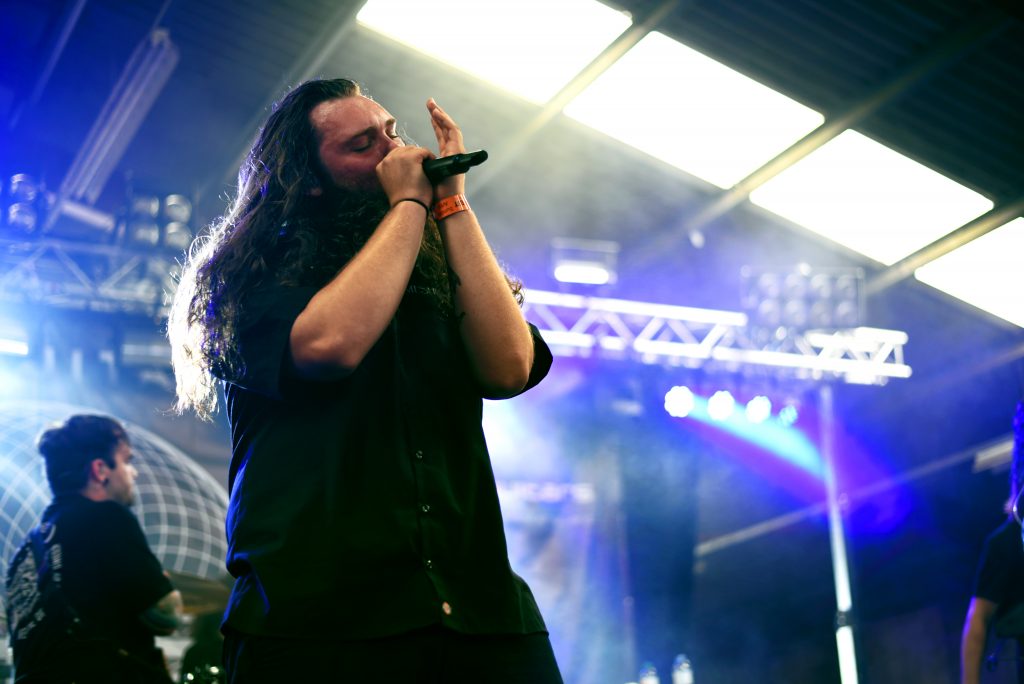 Sunday was a strange day, by this point I felt like I was dying due to not having a sleeping mat or pillows and my neck was aching so bad from all the head banging. Luckily nearly all of the food stalls were full of yummy goodness and fairly reasonable pricing I thought. The festival did a good job of making sure everyone felt welcomed, and all the staff were really helpful if needed. This time I thought it’d be best to get some mango juice from the Shisha Tent and some noodles from a different stall, after drinking Dr Pepper or rum all weekend it starts to get to you. First band I checked out was Oni, which I wasn’t sure if I would like them live as much as I like their music, but I did. They were awesome, and so good live to hear. The next band was Novena, after hearing a lot about them on the UKTM Facebook page due to one of the memebers (Harrison) setting up the ‘newbie’ camp there and hearing a ton of good things it seemed like something I didn’t want to miss. I was right, it was packed out from what I could see, and straight away you notice nearly all the band wearing suits. There songs were incredibly long at like ten minutes a piece, and very rememberable. Quite hard to describe the music itself, but I felt like it reminded me a bit of Queen going from very slow to faster parts and the harmony’s of the three members singing together at parts. They were a very blissed out band and perfect for a Sunday afternoon after a long but great festival. Also the fact they handed out angry react (Facebook emoji) stickers, very quirky. Finally we went and checked out Igorrr, as soon as I walked in I could tell this would be a experience. The band itself was very split, the drummer and DJ as such looked ‘normal’ where as the two singers had a very creepy and strange look to them. I found the music to be of gypsy/circus background with a lot of blast and techno beats in the background coupled with the ‘metalness’. It worked perfectly and the crowd loved it, never seen dancing like that before! It wasn’t the type of thing I would listen to as a album, but live no one should miss it, definitely a experience if anything!

Overall I absolutely loved Tech Fest 2017, and am 100% going back again next year. It has the most chilled out atmosphere and every single person is lovely. I have come to the conclusion that the hype of the festival is justified, and now I have the worst festival blues. It felt like home, and something you could do every single day. If you haven’t been already I highly recommend it, this is not a festival you want to miss!