Deliberations From The Shire with Mike James – Godflesh 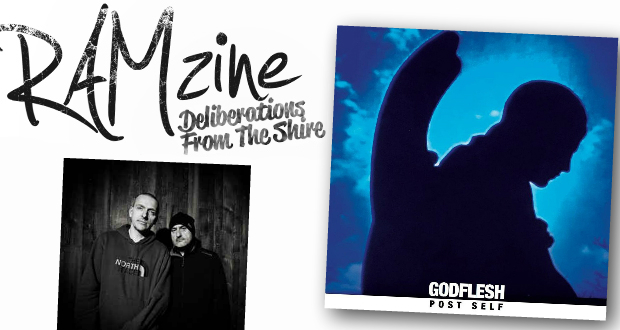 When we talk about pioneers of a sound they don’t get more pioneering than Godflesh who have been making post punk and industrial music since its inception in the very early nineteen eighties and they have been influencing bands and the scene from then on. Drawing influence from power electronic of forefathers Whitehouse, noise rock band Swans, as well as ambient music creator Brian Eno and fellow heavy metal titans Black Sabbath. Godflesh are among the pioneers of both industrial metal and post-metal and are considered a significant experimental metal and extreme metal band.

Post Self is a look back at what has influenced them back in the day and given it a modern feel. In places it’s menacing, intense and an all consuming  assault on the ears. But largely the eighth album by Godflesh is atmospheric in a post apocalyptic landscape. For me the album conjures up barren wastelands where deserted towns have been left to dwindle, after the localised industries have gone from the area, all under a grey skies. This album is mostly instrumental with the lyrics perfectly complimenting the music which highlights themes like anxiety and depression, mortality and fear itself.