Deliberations From The Shire with Mike James – GWAR 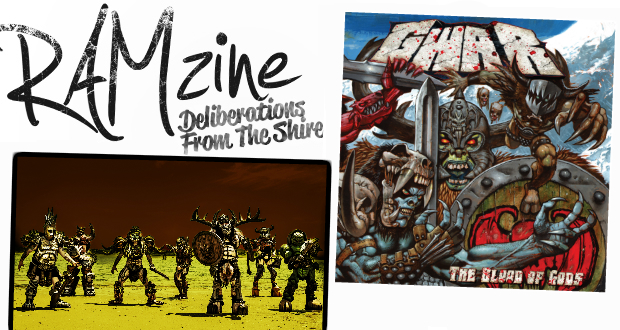 Riffs followed by riffs followed by riffs and more riffs is one way to describe the new album from GWAR. From the off, the opening track is straight out of the Tony Iommi school of dark sounding bone crushing chords creating just the beginning to the new look and feel GWAR. If you strip away all the costumes and history surrounding the band this is an epic return to recorded music and taken as a whole The Blood Of Gods is a fantastic body of hard stomping rock that would not feel out of place next to an Alter Bridge or hard acts like Manson.

It’s been a few years since the bands ruler Oderus Urungus passed on and having tried different beings to front the band they final discovered the vocal talent of The Beserker Blóthar who seems to have given the band new vigour and energy. Anyone who saw them on this summer’s Warped Tour would have experienced.

This album is not a rebirth but a prequel to all their albums to date with the theme being set out as GWAR are an entity from outer space that  feel to Earth at the beginning of life evolving they quote “The Blood of Gods, is nothing less than a sacred text chronicling the rise of humanity against their makers, and the massive battle between GWAR and the forces of all that is uptight and wrong with the world.”

Although this is a new beginning for GWAR there are tracks on this album that do tie in how the rest of the band feel being left behind after Oderus ascension to the higher levels and for me these are the stand out tracks.

There is defiantly a future for GWAR to wreak havoc and hopefully that will happen in the UK soon.