Deliberations From The Shire with Mike James – Motionless In White 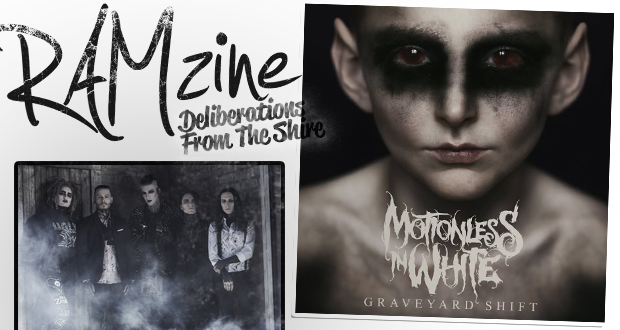 I’ve always had Motionless In White down as a gateway band targeted towards your college aged kids, but over the course of the last few albums they have grown up to be young adults and the band have gone with it too, although they still cater to the theatrical and light-hearted side of accessible rock the content and sounds have grown up like their audience. Lead singer Chris has a clear vision for the future for the band and this album is a leap in the right direction to be able to sustain and build for the future.

There are some crushing tunes on this album that would draw in a whole new audience given the chance and the add electronics make Graveyard Shift an album that can fill arenas. On the other hand, there are tracks that are daytime radio friendly as well with giant hooks and riffs to sing along to on top of the provocative lyrics and crowd chants.

One of the standout tracks for me is ‘Necessary Evil’ which features Mr Jonathan Davis of KoRn lending his vocal tones to a track that is Nu Metal for a new generation which as mentioned before acts as a gateway hopefully for kids to discover new music and bands that have influenced the guys in Motionless In White. Another of the standout tracks is ‘Not My Type:Dead As F**k2′ which blends and industrial tinged synth beat with haunting child laughs and Chris’s lyrics that make this track stand out and would not be out of place in a Tim Burton film. This is a massive step up for the band and the future is theirs for the taking.

Motionless In White Graveyard Shift is out 5th May 2017 via RoadRunner Records.