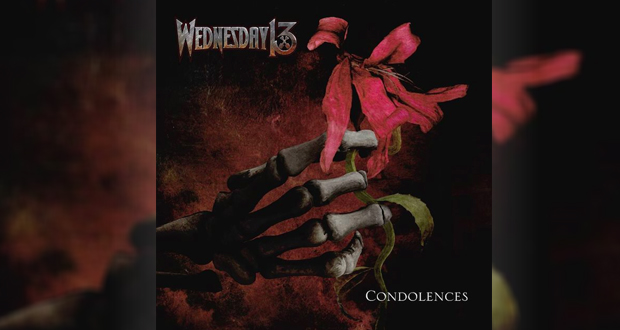 Joseph Poole, aka Wednesday 13 has created a new album that is as far removed from his previous punk-rock work and comedic spin-off song covers as you can get. If you’re looking for ‘Morgue Than Words’, then you’ve come to the wrong place, but there are certainly ‘Bad Things’ here. This is a far darker and more sinister body of work which while is unlike anything you have heard before, still has the very distinctive flavourings of Wednesday 13.

The man himself has stated he has found his taste has gradually changed via influences by his friend’s musical interests, finding himself growing ever fonder of the metal world and all that that comes with; “The band is visually stronger and that’s taken things to a new level” states 13. As I said previously, this new album, titled Condolences, is still very much a Wednesday 13 album; you can hear and feel the distinctive form of writing, how each song has been instrumentally constructed. There is a sense of comfort within this album. It’s your sibling or your other half who you’ve always known but who has taken a darker look and vibe to them but fundamentally is the same person. A sense of familiarity wafts into your ears.

The music video for the albums’ title track ‘Condolences’ can be seen below:

Along with this new thirteen track and his seventh album under ‘Wednesday 13’ comes a whole new show, filled with even more energy and theatrics. 13 says; “We’re taking the music, the imagery and the entire stage show up a level. It’s gonna be a full-on theatrical stage production, so I’ll be busy as fuck on stage!” The band are planning to tour this new release extensively and have already begun doing so.

The album artwork is unusual, it looks rather dated as if it was made in the late 80’s or 90’s and left in a shop window in the sunlight for a while. It’s faded pastel look and bad skeletal hand graphic hardly inspires you to purchase it if you were glancing through albums. But that’s my only major critical point about this album. If you’ve always been a Wednesday 13 fan I think you will feel right at home with ‘Condolences’ and will welcome, or maybe not even notice the new darker direction that has been taken. If you’re new to his music or haven’t heard of the band before then I would presume that you might struggle to wrap your head around it.

Condolences is available now everywhere and check to see if Wednesday 13 are touring near you. If not then I’m sure you will get a chance as I feel this will be a long tour!