Can You Hear Them? A Short Piece On Ozzy Osbourne’s Excellent Down To Earth 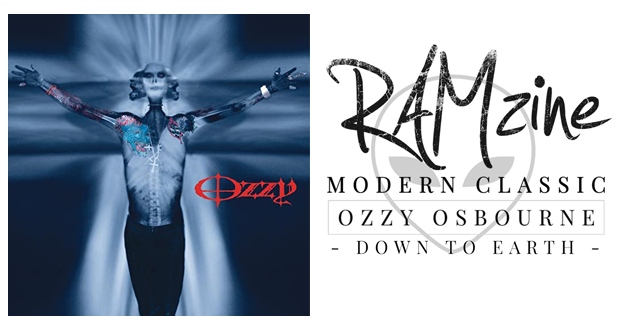 When legendary rocker Ozzy Osbourne (Black Sabbath) released his first post-millennial record titled Down to Earth in October 2001, six years had passed since his previous solo offering, more specifically the musically diverse Ozzmosis from 1995. The latter half of the ’90s saw Ozzy launch the now hugely successful, annual festival tour, simply labelled Ozzfest and reunite with his Black Sabbath bandmates for some well-received and spectacular shows in Europe and the US. The reunion, however, bore very little creative fruit in terms of new studio material apart from the songs ‘Psycho Man’ and ‘Selling My Soul’ that were included as bonus tracks on the majestic Reunion live release (1998).

Ozzy eventually went to work on his eighth LP, the aforementioned Down to Earth, at Henson Recording Studios in Los Angeles and had Tim Palmer (Porcupine Tree, The Mission, Tarja Turunen) produce it. With a tight and impressive line-up consisting of drummer Mike Bordin (Faith No More), bassist Rob Trujillo (Suicidal Tendencies, Metallica), guitarist Zakk Wylde (Black Label Society), and the Prince of Darkness himself on vocals, the musicianship left nothing to be desired and the whole group chimed in with a stellar performance. Wylde did not have any creative input as he had only just re-joined the ensemble prior to entering the studio; guitarist Joe Holmes who had been with Ozzy’s band since the 1995 Ozzmosis tour co-wrote three tunes for Down to Earth and then left the outfit before they started laying down tracks in the studio.

I have been playing my well-worn CD copy of this underappreciated piece of work on a regular basis during the pandemic and not only has it been marvellous to go back and truly immerse oneself in the song material, but there is also something uplifting and vital about this record that appeals to me greatly; I find it inspired and inspiring. One thing that strikes me whenever I spin this disc is how fresh-sounding and robust the compositions are. They have neither lost their edge nor their power to enthral the listener over the years. They may not be as musically bold or adventurous as the ones that constituted Ozzmosis but what I think sets the two LPs apart is that Down to Earth is much more cohesive than the former. From the thunderous opener ‘Gets Me Through’ to the somewhat gentle ‘Dreamer’ and further on to the infectiously catchy ‘Facing Hell’, the gloomy ‘No Easy Way Out’, and the uplifting ‘Alive’, Ozzy and his skilled cohorts expertly guide us through a wonderful maze of varied heavy metal where great surprises and wicked twists abound in equal measure.

Take the short “You Know… (Part 1)” where it starts out as something akin to a lament or a heartfelt confession only to end on a deranged and eerie note that leaves a thick, unsettling atmosphere dangling in the air. Then there is the moving ‘Running Out of Time’ whose poignant lyrics stir the mind and speak to the soul. Simply put, there is an overwhelming number of meaty riffs, classy melodies, and superb vocal hooks present on the album and the entire affair is well-produced and packs a punch. As author Joel McIver states, “Down to Earth was released on October 27, and was something of a career-high for Ozzy, at least in that it finally rebranded him as a singer for the new millennium”

One of the more intriguing things about Down to Earth is that it includes a few ideas that sprang from the aborted Black Sabbath writing sessions that took place around 2001. As I said earlier on, the Sabbath reunion of the late 90s did not bring about a new studio record, but the idea of the group doing a new album together had come about in the wake of their reunion shows, so at some point, it was on the agenda before the project fizzled out. I distinctly recall being slightly surprised when I noticed that Black Sabbath stalwart and keyboardist Geoff Nicholls was listed as a songwriter in the credits to Down to Earth, but that ties in with the fact that Nicholls, who had been a steady member of Sabbath since 1979, also handled the keyboards on Black Sabbath’s reunion tours with Osbourne from 1997 until 2004.

Ozzy and Geoff had obviously collaborated on certain ideas together while being colleagues in Black Sabbath, and Ozzy simply brought those to the songwriting sessions for Down to Earth later on and applied them to the tracks ‘Facing Hell’ and ‘Black Illusion’. The latter is undoubtedly one of the darkest tunes to be found on the album and Joel McIver once described it as “slow, Iommi-meets-McCartney melodicism”.

On a related side note, there is a track by Black Sabbath titled ‘Scary Dreams‘ floating around on YouTube (a live version, mind you) that also emanated from the aborted Sabbath writing sessions. The band performed it several times in 2001 but it never lasted beyond this tour or materialized anywhere else, which basically means that it merely exists as a bootleg recording on the web. For the curious listeners and fans out there, that one might be worth looking up.

With respect to the correlation between the Sabbath writing sessions that never really went anywhere and the song material that ended up on Ozzy’s Down to Earth, author Garry-Sharpe Young noted that

The fact that a number of outside songwriters contributed material to Down to Earth and collaborated with Ozzy on the tunes is arguably what has contributed such a large amount of variety to the proceedings while also showcasing the many different sides of Osbourne as a performer and an artist. As Classic Rock’s Paul Elliott once commented,

In relation to the hugely popular and commercially oriented ‘Dreamer’, the single-CD release contains a massive-sounding B-side track named ‘Black Skies’ that is capable of moving mountains, and it is beyond me why they did not include this gut-piercing song on the actual album. So, should you ever come across this particular single in a second-hand store somewhere, you ought to pick it up for ‘Black Skies’ alone as this brooding, fierce composition truly rules.

Labelling Down to Earth a modern classic might be stretching the truth a bit to some readers out there, but then again, it is undoubtedly a late-career highlight of Ozzy’s to these ears, and it still sounds magnificent today. Even though the album artwork looks dated and, quite frankly, dreadful, the musical content is excellent and there are plenty of gems for you to discover and explore here. The live renditions of some of the record’s catchiest and most accessible tracks, more specifically ‘Gets Me Through‘, ‘Junkie‘, and ‘That I Never Had‘, are also featured on 2002’s Live at Budokan release, which is a potent offering although guitar-slinger Zakk Wylde does tend to butcher certain portions of the classic tunes, but this is merely a matter of taste and preference.

To sum up, Ozzy’s 2001 LP is an overlooked piece of heavy metal bliss in the man’s impressive discography that has aged incredibly well and still stands tall and proud as a captivating opus with longevity and spirit to it. It may not be up there with the legendary rocker’s stone-cold classics from the early 80s, but it certainly does warrant repeated listens and is a classy affair through and through. Let us celebrate its 20th anniversary!

Share
Facebook
Twitter
Pinterest
Linkedin
Email
Print
Mix
Previous articleCradle Of Filth “Ed Sheeran is a much better guitarist than he lets on” Bloodstock 2021 Interview
Next articleYES – Every Album, Every Song in the 80’s