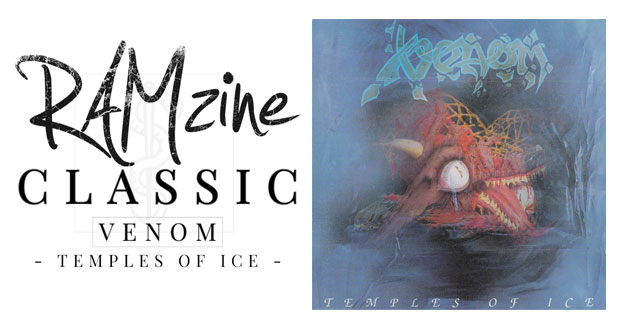 Black metal pioneers Venom hardly need any introduction as they are the forefathers of everything that is extreme within metal, and their influence on the entire scene cannot be overstated. The unholy trinity from Newcastle was and is the sound of hell on earth, and their earliest outputs are the stuff of legend and hugely important in so many ways. Whenever one mentions or thinks of the vicious ensemble, one’s thoughts probably tend to gravitate toward Welcome to Hell (1981), Black Metal (1982), and At War with Satan (1984), which is perfectly understandable as these are exceptionally cool landmark records that spawned countless metal subgenres. Combining the speed of Mötorhead and punk rock with the eerie, ominous aspects of Black Sabbath and then adopting dark stage names and hellish, satanic imagery as well as sinister lyrical themes, the British squadron blazed a new trail and carved out something unique that they could rightfully call their own. As stated in Lords of Chaos by authors Michael Moynihan and Didrik Søderlind, “Venom began in 1979-1980 in Newcastle, England, the result of three Metal fans and musicians deciding to take things one step further than their contemporaries” (10). As Dayal Patterson also points out, “[…] Venom were not only pivotal in the creation and development of “extreme metal,” they were also arguably the first band for whom such a description could be considered accurate” (6). Patterson, later on, states that “[…] there’s no doubt that it was their early career that really helped create the black metal movement. And of course, Venom will always be the band responsible for the term itself (alongside several others), even if the later bands that appropriated the phrase would interpret it somewhat differently” (16). If you are not already familiar with their early outputs, you need to get off your ass and get a hold of them as soon as humanly possible and study them.

Given that Venom have been around for decades and lasted longer than most metal acts (they disbanded for a couple of years around 1993-1994) and have endured several line-up changes, it should come as no surprise that that are some overlooked gems and dark horses in their discography. One of these is 1991’s Temples of Ice, which was the second Venom LP to feature former Atomkraft vocalist/bassist Tony “Demolition Man” Dolan, and this one deserves more praise than what has previously been bestowed upon it. The rest of the line-up was comprised of guitarist Al Barnes and the two original members and founders of the band, Abaddon (drums) and Mantas (guitars). Its ten tracks were captured for posterity at Lynx Studios in Newcastle.

The first time I came across Temples of Ice, or rather a huge chunk of it, was back in the spring of 2001 when a friend of mine gave me a copy of an obscure Venom compilation titled The Court of Death, which contained six songs lifted from the Temples of Ice LP. This particular compilation focused solely on the Tony Dolan-era of the group and so I essentially got my hands on a substantial amount of material from the three records that he cut with the band before they disbanded sometime in 1992.

So why do I love and cherish this hard-hitting, fierce, and seemingly forgotten entry in the group’s discography so much? Why the strange fascination with this album? For one thing, I admire the fact that the group soldiered on in the face of dwindling record sales and managed to record such a strong, muscular set of songs. Secondly, there is the whole notion of Temples of Ice being an underdog and one that you rarely if ever hear people talk about or bring up in discussion. As Alex Ogg states in the liner notes to the aforementioned The Court of Death compilation,

While Prime Evil certainly is a superb slab of blackened thrash metal and a kick-ass effort all around, Temples of Ice is definitely the one Venom record that deserves much more attention and praise. The songs are well-written and catchy, the band appears to be gelling from a purely musical perspective, and the compositions simply work like a sick charm. It is a damn shame that the cursed opus was never promoted properly. I even love the album artwork, which probably says more about me than virtually every other metalhead out there who has ever glanced at its ugly sleeve. Apart from the dark and epic title song, some of the most memorable tracks to be discovered here include the pounding ‘Tribes’, the instantly memorable ‘In Memory of (Paul Miller 1964-90)’, the dynamic ‘Even in Heaven’, and the short, gut-piercing ‘Arachnid’. The record is fast and wild, loose and gritty – just the unpolished heavy metal cocktail that you need. The production does sound a tad dated from today’s perspective but that only adds to its charm and appeal.

Unless you are lucky enough to come across a copy of either the original vinyl or CD edition of the album (or perhaps a compilation such as the aforementioned The Court of Death), your best bet is to simply look it up on YouTube and check it out. Venom is still alive and kicking ass (the band is fronted by Cronos nowadays) and Fallen Angels (2011) and From the Very Depths (2015) are late-career triumphs that any self-respecting fans of extreme metal ought to invest their time and hard-earned cash in, but if you want to look for something that for some unfair reason appears to be a mere footnote in the group’s saga, then Temples of Ice is an overlooked treat. When Abaddon, Mantas, and Dolan resurrected the Prime Evil line-up (minus guitarist Al Barnes) in 2015 and adopted the moniker Venom Inc., I kept wishing that they would perform some of the tracks from the 1991 LP on their tours, but to the best of my knowledge it was not until 2018 that the Temples of Ice title track made an appearance in their set list. However, it is worth mentioning that prior to the launch of Venom Inc., Dolan and Mantas had actually recorded an album titled Crucified by M-pire of Evil in 2013, which consisted of re-recorded versions of tracks from Prime Evil, Temples of Ice, and The Waste Lands. Clearly, Temples of Ice had not been entirely forgotten by its creators.

Some out there might argue that Temples of Ice is the low point in the band’s career but do not for a second believe that; those people clearly have not listened to Calm Before the Storm (1987) or Hell (2008). A remastered edition of Venom’s 1991 opus would be a most welcome addition to the black- and thrash metal canon of great and underappreciated works, and even though it may not be groundbreaking or flawless, it fucking slays and offers hooks and rawness aplenty.

On a totally unrelated and final note, Tony Dolan appears as a carpenter named Mr. Lamb in the film titled Master and Commander – The Far Side of the World (2003) starring Russell Crowe and Paul Bethany, so make sure you pay attention the next time you watch said movie. I like metal-related trivia and fun facts like that. Perhaps you do too?

Temples of Ice was recorded in Newcastle (Lynx Studios) and produced by Kevin Ridley and Venom.

Released by Under One Flag in 1991 and distributed by Music for Nations.

Liner notes by Alex Ogg to Venom’s The Court of Death, released by Receiver Records in the year 2000