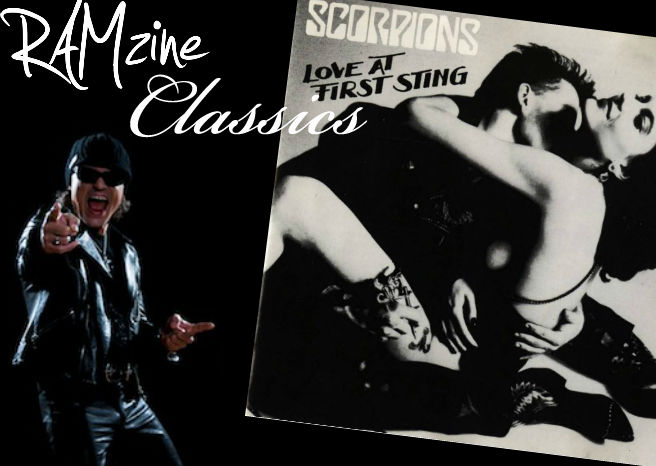 Sometimes, we all wish music was like it was in the 80s again. Some of the most important music of the last century came out of that decade, in all genres. This was particularly evident in rock and metal. One band, hailing from Germany, typifies this. With their technical twin guitar attack and collective ear for what makes a song catchy they took the world of rock and metal by storm. This band was Scorpions, and in particular, they made a massive impact with their album “Love At First Sting.”

The band’s lineup on this album comprised of singer Klaus Meine, guitarists Rudolf Schenker and Matthias Jabs, bassist Francis Buchholz and drummer Herman Rarebell attack the musical landscape with a ferocious sense of melody. Opening song Bad Boys Running Wild is a real stereotypical 80s hard rock anthem. There’s elements of glam in here too, which is refreshing. The way the catchy riff overrides the music is a signature element of the band’s sound and it really works to good effect. The drums underpin the whole song and allow the vocals to focus on its simple solid melody. A strong opener.

Next is: Rock You Like A Hurricane, one of the most famous hard rock songs of all time. This simple and ridiculously catchy song is now a karaoke classic worldwide and is a song everyone knows. The simple melody and signature guitar riff is unmistakable. Meine’s fantastic vocal range is even on show in a song as simple as this; his ability to jump up octaves without any trouble whatsoever is so impressive. This is an advert for sheer simplicity this song, and clearly less is more here.

Up next is I’m Leaving You, a song which has a real classic metal riff. It follows the blueprint of metal to such a degree – there’s even a guitar solo in the intro! The pace is kept up throughout the song and the clean guitar line in the verse adds a different dimension to the song and shows the band’s versatility.

Following this is Coming Home, the first ballad style song on the album. After an emotional first part the song kicks into overdrive with a real up tempo feel, akin to something that could have been produced by Iron Maiden. This song was a fantastic surprise; with a start like that I did not expect to be faced with face-melting solos and bone crunching riffs! One of the albums best songs.

Next up is The Same Thrill, another frantic up-tempo song. It’s mainly built around furious guitar work, with a particularly technical guitar solo appearing half way through the song. Scorpions are a band that are full of surprises, from the way the album started it was expected that less is more would be the theme throughout. What happened however is that the album evolves into a classic metal monster, influencing bands from all genres of music. This song in particular typifies that.

Following on is Big City Nights, one of the band’s classic songs. Based on a simple guitar riff and Rolling Stones-esque groove, this is another catchy masterpiece. The vocals are so simple it’s unreal, yet their effectiveness cannot be denied. No matter how simple a song seems with Scorpions, there’s an element of technicality to it, and once again this is provided by the guitars in this particular song.

Up next is As Soon As The Good Times Roll, which has a real AC/DC vibe to it. The masters of the catchy song, Scorpions really know how to make the listener sit up and take notice. The bass guitar here really holds things together. Often in the background in the other songs, it’s obvious that it is underpinning everything here. A good solid album track.

Next is Crossfire which begins with a marching snare drum pattern and develops into a really interesting track. The marching pattern keeps up through the verse and holds the song together. It gives the song a traditional vibe, and Scorpions should be commended for trying something outside the normal drum grooves. The effect is simply brilliant, and certainly provides drummers with food for thought about how they approach their drum parts.

The album closes with Still Loving You, which is as pure a ballad as you’ll find anywhere. The classic guitar tone and drum sound really allow the vocals to create their own place in the song; because they sound so clean and tight the vocals can take the lead. As good as the guitars are, they really take a back seat in this song proving that they know how to play for the song as well as come to the fore when they need to.

In closing, this is a really underrated albums by one of the most unsung bands of all time. Scorpions are masters of every facet of hard rock and metal, their varied sound and sense of technicality really sets them apart from their contemporaries. Buy this album, it’s something different if you don’t want to change too much from the norm. “Catchy technicality.” That’s a good phrase.