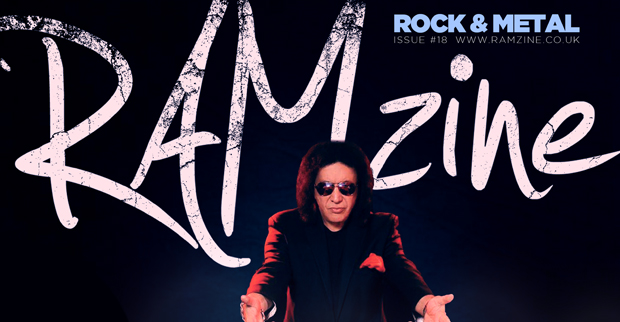 RAMzine Issue 18 is out now featuring rockstar, businessman and KISS legend Gene Simmons. He talks to us about The Vault which is a monumental collection, a 50-year time capsule of tracks, including some pretty awesome features. Gene tells us “This has never been done before. It’s the largest box set of all time. It is literally 150 of never before released tracks that spans 50 years from 1966 to 2016.”

You will also find out how the beast from the East caused a kerfuffle at the tenth Hammerfest. Plus, our lovely photoset from HRH AOR Festival, as well as photos from recent gigs including Evanescence and Testament.

We take you back to 1999 in our RAMzine Classic as we look at how Blink 182‘s Enema of The State shaped pop-rock. And we introduce you to an incredible instrumental post-rock band from beneath the underground who are about to come shooting out from below, high into the sky, they are called Coldbones and they hail from South-East Kent.