Last Tuesday, RAMzine was summoned by the clergy of the one and only Ghost for a one-off press only listen to their infinitely anticipated fourth album Prequelle. Despite the lack of presence from Ghost visionary Tobias Forge, the newly appointed Cardinal Copia or Papa 0 (pronounced “Nil” just to make it clear), given the marble gothic setting of London’s utterly extravagant Masonic Temple (and a very much open bar), this made very little impact for what we were about to witness. 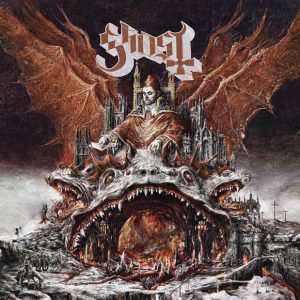 A quick word from Download organizer Andy Copping to get the mood geared up, tonight had all the trademarks of a Freemason gathering than an album playthrough; all very cloak and dagger, and to be honest what else were we really expecting here? This only added to the bands omnipresent mystique that we lose our marbles for every time. Then the music starts. Loud; terrifying; dark; infectious – by all that is unholy, with restraints on spoilers, come June 1, dear reader, everything you know and love about this band will change.

Ten tracks of rock magnificence that will engross you further into the world of Ghost than ever before. Ever expanding their universe, expect cinematic extravagance where only the darkness will serve as your ally. We’ve said far too much. Just keep calm, go about your day and hail Satan.

Prequelle is out June 1 via Spinefarm.