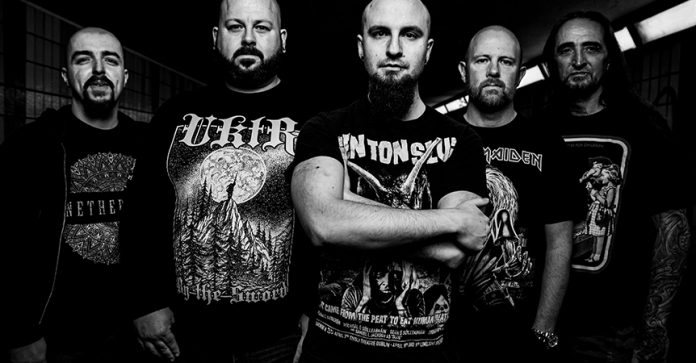 We were in the thick of it at Bloodstock 2021 getting some facetime with some of the bands, here’s what Birmingham’s Ashen Crown fresh off the Sophie stage had to say about the vibes at Bloodstock, their new upcoming album, the bands future and if they’ll ever produce a ballad.

How would you describe your sound in a few words?

So how did you think it went today on the Sophie stage?

Oh it was amazing, we didn’t expect half the people to turn up for that, the place has been absolutely rammed at the Sophie stage and it’s a dream come true really, it’s absolutely immense. The pits and the chanting… yeah, I literally want to kiss everyone on the lips I’m having such a good time!

Have you really missed that sort of thing of the past year or so?

Oh yeah totally! We live and breathe for music don’t we and with that not being possible with Covid and the Pandemic and everything, this is a massive sort of outlet for everyone you know? A little bit of normality where we can all meet up again and there’s music playing, and there’s the social side of it, everyone’s just hugging each other and there’s just so many people that know each other it’s almost like a family, community vibe so yeah it’s been amazing. There are that many people we have made friends with purely through music and bands we’ve played with across the years and literally just bumping into people we haven’t seen for a year and it’s like it’s straight back to day one, like the last eighteen months never happened.

It’s a nice feeling, it’s just brilliant, to put all that behind us, even for a bit, even if it’s for a week, it’s good. The fact the Bloodstock team have been able to get this all together, with every challenge that’s faced them, I mean there are still bands dropping out from this “Pingdemic” shit, you know, I’ve got to take my hat off to them and how hard they work, we’ve just played the gig of our life and everyone is here, everyone has a smile on their face, everyone’s having a great time, it’s just amazing.

So your next port of call is a new album, can you tell us what’s that’s all about?

Yeah! So we released our debut titled Obsolescence, what we did was, we have the option of going for an EP or an album so we chose to go for an album for the chance to kind of put a line under everything, we’ve had a lot of changes in the band, our original drummer Chris has moved on, we got Mike in, so Mike put his stamp on the tracks, we got them ready for recording and got the album out there, what we wanted to do was to say, “Right, this a timestamp of the band right now, let’s move on”.

We’ve sort of changed the writing processes, starting to get everyone’s input into and really work as a band to write, instead of me or Jay working on a riff originally, instead we’re (now) bringing single riffs in and we’re working on these together, and Mike has got this really like analytical way of approaching things as well, so his input is invaluable to the makeup of the track and how to structure it, he’s there every time, whacking up spreadsheets and you know, super organised! He likes a PDF, yeah a PDF comes through and it’s rock n roll! The next thing we’re going to have is a projector I think, in the lock-up, maybe a laser pointer. A pie-chart of how heavy we are at the moment!

What we are essentially trying to do is to expand, we’re kind of labelled death metal and our primary influence is a lot of death metal bands but we’re so much more than that and so much more influences our music taste and our playing, so we try and put everything into one pot and see what comes out, bit of thrash, bit of speed metal, bit of everything.

One of the new tracks, we’ve had to sort of, double part it? Because it starts off sort of flat out and aggressive, raw balls to wall blast beats and then we’ve had to sort of go, right, we’ve got another half of the song so we’re going to have to make a part one and a part two, a bit like Vermillion from Slipknot, you know? We’ve got ourselves into that sort of pickle where we don’t want an eight-minute track so yeah, the latter part of that has got a cock rocky sort of Scorpions vibe to it, then we’ve got real mad like Megadeth bits and then we’ll drop into your stereotypical Benediction, Bolt Thrower sort of death metal

Something for everyone then?

Yeah that’s it, we all like so many different sorts of metal, not only metal even, like rock and stuff, I mean I’m a massive Pink Floyd fan. I don’t think we’re going to knock a ballad out anytime soon. No, I think “Rise” will be the closest we’ve got to a ballad, but it’s just about pushing the boundaries and seeing what we can do as musicians and it sounds very cliché but we want to be free to express ourselves, we just don’t want to get pigeon-holed and that may work against us as you’ve got the old guard who are like, right if you’re not running an HM2 and you’re not playing in this key and you’re not playing double bass four over four we don’t want to know… we have more than that to offer so we enjoy that and we want to do that but music is interesting and it’s all subjective anyway and people are going to take it or leave it so why not just do what you enjoy and play what you want to play? That’s our approach.

I mean that hits you in the chest too, it’s overwhelming it really is, I couldn’t stop laughing! It’s the happiest I’ve ever looked at a gig, I think I smiled at everybody! It took a bit of a moment to take it all in, I just started laughing, I was like, I can’t believe how many people are here, it’s absolutely insane.

If it feels like you’ve reached the highest point at the minute then what’s next?

I’d like to say opening the main stage! That would be fine, you never know but it’s something to aim for, we seemed to go down pretty well today, if we play our cards right and work hard then who knows? Keep busy, keep rocking out and yeah, stay active, try not to upset anyone on the way and you never know, might be good…. We could never upset anyone.

So what advice would you give to someone who wants to perform Bloodstock or form a band?

That attitude will eventually get you to play at Bloodstock, three weeks ago we were playing Scruffy Murpheys in Birmingham, headlining… no we weren’t, Wired headlined, we let Wired headline that one, good friends of ours! I mean, that was like a hundred people at capacity and it was still just as good, it’s still got that energy that vibe, people thee going mad, pits kicking off and we’re just playing our music. It doesn’t matter if you’re playing a hundred capacity or a two thousand capacity it’s still the same buzz, still the same vibe, as long as people are digging it and getting into it it’s happy days.

Huge thanks to Ashen Crown for taking the time to chat with us, be sure to check them out and drop a follow at the links below.