Butcher Babies “As a musician, you should evolve and there’s always room for growth” 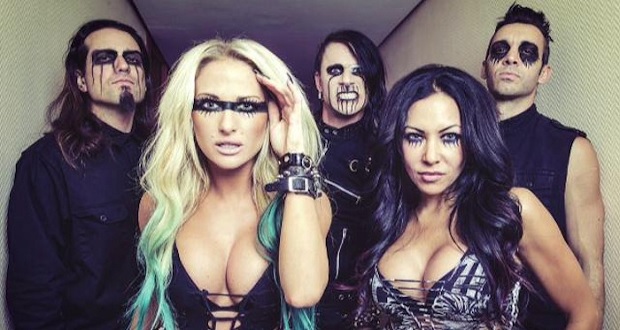 It’s hard to believe Butcher Babies have been around for almost 8 years now. As the music industry is ever-changing now, the ladies and gents of Butcher Babies are moving forward and creating their own videos, unique merch items, and throwing pizza parties just for their fans. The new album Lilith was just released last week and is said to be their most mature, and heavy, album to date. We caught up with one of half of the lead vocalist duo – Heidi Shepard – to talk about the new album, their live shows, women in rock, and of course – pineapple on pizza.

You are about to go on tour with Hollywood Undead, you have a totally different style to them, are you fans?

Yeah, we’ve known them for a while now. One of them, his wife is one of my best friends. I’ve always thought their show was fun and entertaining, just a fun set. We haven’t been on tour with a band like this so I’m looking forward to seeing how our fans take to it, and how their fans react to us too.

What sets your new album Lilith from the previous two albums?

With Lilith, it’s just a lot more mature. As a musician, you should evolve and there’s always room for growth. With our first album, we just wanted to get out there and show them ‘hey! here we are!’ Second album we wanted to bring it back to the thrashy-ness we had in the start about 10 years ago. This one I think its just a mix of both. Some vocal harmonies, a lot of singing and some of the heaviest songs we’ve ever written too. It’s very grown-up, but also experimental.

The concept of Lilith is taken from Biblical mythology. The album artwork has a version of this figure with two heads, does this represent you and Carla as a kind of two-headed woman?

(laughs) I guess, in a way. There are two of us, but I think more so Lilith embodies the rebellion against people telling us what to do. She embodies that feminine power. She does everything she can to be empowered. The reason we stuck with that name was because the previous albums have steered away from writing anything sexual. There was not one sexual note in any of our songs (laughs). So one thing we decided to do was bring that in to our writing. For so many years we didn’t do it because I think some people almost expected it. We never did. We brought it in this album because Lilith, as a character, used her sexuality a lot.

Do you feel since a lot of female performers in metal, such as Maria Brink, have also used sexuality in their music – it gave you the freedom to do so?

I think it’s been around with females, and even males, in the industry. We just didn’t do it at all before because we didn’t want to play up to it so much. We did have the nipple tape as a tribute to Wendy O Williams, and that was like seven years ago. Some people expect us to use sexuality as ‘shocking’ which is not us at all so we stayed away from it. I think now may …I don’t fucking care about that. So I can write about what I want to write about. We’re going to carry on and not let that sort of standard pigeon-hole us to writing about one certain subject. In This Moment have been doing it for a while and good for them, I love those guys, some females it doesn’t work for – which is fine. So this is kind of an experiment for us, if you will.

On a similar note – do you think there are more women in metal bands these days?

I think it’s definitely more accepted. When myself and Carla [Harvey, other lead vocalist] started together, almost ten years ago, there weren’t many women in the metal scene – at all! Now you see more and more women doing it and I hope we’ve given women the empowerment to get in to bands and the metal scene. I would like to inspire in that way, so I hope we have helped. I think it’s so wonderful to see all these females popping up.

It wasn’t that long since the last album, Take It Like A Man, then you have been on tour around the world for almost a year, back to working on this album – is it a constant work cycle for Butcher Babies?

I think so, we are doing what we love. We went in to this session with 24 songs written and had to wittle it down to the 12. If you are always writing, you aren’t always creating. We are already coming up with idea for the next album. It’s just who we are, it’s in our nature. I just love touring, I can’t wait to get back on the road. If it continues to be that cycle -hell yeah!

Are you planning on coming to the UK any time soon?

We’re hoping that in 2018, maybe next Spring, we can get our feet wet over there again. It’s been far too long – that’s for sure. There’s definitely plans in the works for it.

So any plans for festivals next year?

Fingers crossed. We haven’t announced anything, but we have a new manager so I hope things will work out for 2018. Everyone says [Bloodstock] is the best one, so I hope we can lock that down. So fingers crossed!

You put a lot of effort in to your live shows, do you feel your stage show is as import – if not more-  than the music?

Absolutely! 100%. You know what’s really interesting? Take a band like Gojira: they have an amazing light show, amazing music, the whole works. When you see a band you want to stimulate all senses. You want them to see something amazing and feel something amazing. So if you think of Gojira – who I saw open for Metallica…in broad daylight. It was almost like watching a different band. That’s how I want our show to feel like. The lights, the fog, the great production that makes it a show. We are always working hard on getting it right, and we’re trying to up that.

So are you getting ideas from seeing other bands, all the time?

I think every band does that. When someone does something that grabs your attention and you think it’s a cool idea, of course not ripping someone off completely. Taking it and maybe putting your own spin on it. All bands do it. I love going to live shows, for many reasons but for that reason too.

The new video ‘Lilith’ has just came out. Do you have any input on how it turned out?

Every single time. We write the treatments, we have a hand in everything that happens and I fully produced this video. Between getting the actors, locations, meeting the director, we did a lot. My brother is actually the main lead. My family provided all the lights, so it was fully produced in house – by us.  We always try to do it like that. In Monster’s Ball it’s all of our friends. It’s always fun. I never want to lose having a hand in these things. When I was younger I used to lay in bed, listening to music and visualise what the video would look like.  Having the ability to actually do that is cool.

Would you think about producing videos for other bands?

Oh…yeah! Something I’d love to do. Timing wise it might not be practical right now, but it’s something I’d want to do. There’s a lot to be done and I think the sky is the limit. I’d never say no to anything like that.

I have to ask – have you and Carla chosen your Halloween costumes yet?

We are playing in Seattle on Halloween, we always go crazy. Once the whole band dressed as Elvis. Me and Carla dress up as dudes. We glued beards to  our faces, we looked like Amon Amarth. I think this year we are going to be old people. With prosthetic make up and everything. A bit like on Jackass. We are going to get up there and play the show as old people. We’ll have to film it for sure.

Also your VIP package is a pizza party – where did that idea come from?

Not sure who’s idea it was. Henry and I would sit at a bar, drink beer and just come up with ideas. I thin k that was one of our brain-childs from drinking beer (laughs).  We like to make it a little bit different from usual VIP parties. It’s usually a few people walking in, shaking hands, and taking pictures – then leave. We didn’t want to do that. It should be a memorable experience.  So getting people on to the bus to eat pizza –  I think that’s the best way to connect with the fans. We usually do different stuff, but that’s this tour (pause) we will have to do it in the UK too.

So what’s your favourite pizza?

I love Hawaiian. I disagree with all this ‘pineapple doesn’t below on a pizza’ – pineapple belongs on everything. [I inform her about my favourite pizza – donner kebab and jalepeno] Really? That sounds amazing! I’ll have to try that one.

So what other bands are you in to at the moment?

I really like Cane Hill. I’ve been listening to their album from earlier this year. Also King 810, obviously Gojira, [she shouts for Henry] what else have we been listening to? Oh yeah .. the new Mastodon record! It’s different but its really cool. the new Nothing More is really good. I’m looking forward to the new Asking Alexandria album too.

So how is Carla doing with her artwork?

We are actually putting together a lyric book / comic-book together. She does all the artwork and she sends it over to me so I do all the digital editing and graphics. It’s really fun, we love doing stuff like that. We are also launching a website which will sell all sorts: hand-made jewellery, hand made clothes, all kinds of costume stuff we do. That should be launching soon.

So what else do you want to say to your fans?

It’s been a wild, crazy 8 years and thanks for taking this roller coaster with us.