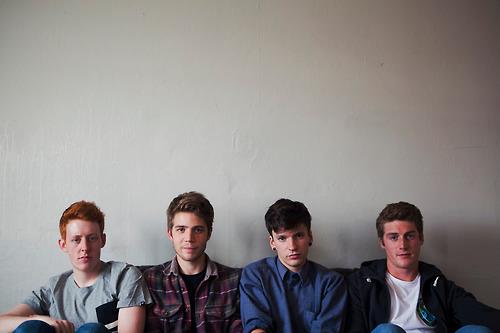 Canterbury are an indie-rock four piece band who despite their name aren’t from Canterbury but in actual fact reside in Farnham, Surrey. The band currently have two albums out, most noteworthy is this summers release ‘Heavy In The Day’. The band are just about to head out on tour supporting Deaf Havana across the UK and we were lucky enough to catch up with them before they headed out on tour.
Team RAM: You’re about the head out on tour with Deaf Havana how excited are you for the tour?
Canterbury: Really excited, deaf havana are a really cool bunch of guys and the venues are wicked. support tours are always fun, but we think this may be one of the funnest yet. its great to be part of a tour with a british band doing so well!

Team RAM: Have you managed to hang out with Deaf Havana much before?
Canterbury: Not too too much, we both played a few festival together. no doubt in a couple weeks we will be tour bros!

Team RAM: You’re playing some pretty big venues during this tour including Shepherds Bush Empire, are you nervous to be playing venues of this size?
Canterbury: Much more excited than nervous really. we have been lucky enough to play a couple venues this size before but not for a while now so it will just be good to play in one again. The empire is one of the nicest looking venues around too!

Team RAM: Have you had much chance to plan and rehearse your set for the tour?
Canterbury: Yeah, weve had a fair few weeks off now so been writing some new songs and rehearsing big time.

Team RAM:  ‘Heavy in the day’ received some amazing reviews, do you think you’ll stick to playing the vast set as tracks from that album?
Canterbury: Definitely. we have been waiting along time to play newer songs in our set so it will be good to play them on a full tour.

Team RAM: After the Deaf Havana tour you’re heading out on your own headline tour, what have you got in store for your headline shows?
Canterbury: Well probably just the longest set we have ever played, we cant wait. but it will be amazing to play our own headline shows and in alot of places we havent been before, or in a while now.

Team RAM: Are there any places in particular you are looking forward to playing?
Canterbury: Other than the obvious favourite towns we have, it will be great to go down to the west for some shows in plymouth etc for the first time ever.

Team RAM: You’ve got Mallory Knox and Scholars on tour with you. Did you guys get to pick your own support?
Canterbury: We did yes. Mallory Knox are doing really well for themselves so it seemed like a no brainer to ask them. weve known the guys in scholars for a while now and toured with them before. so we just wanted to take out a really good band we want to show to people!

Team RAM: If you could support any band in the world who would you want to support?
Canterbury: Muse…the foo fighters. aiming high!

Team RAM: Once the headline tour is over do you actually get some time off to relax over Christmas?
Canterbury: Yeah we will, it will be a good month and a half of touring so that will be nice! Nothing like the festive joy to combat the post tour blues.

Team RAM: Do you think since the release of ‘Heavy In The Day’ earlier this year your fan base has changed at all?
Canterbury: I think its definetly got bigger, which is awesome of course!

Team RAM: You just released the video for your upcoming single ‘Gloria’ how have you found fans reactions so far?
Canterbury: The reactions have been brilliant, seeing as it was essentially just a remake of our old video.

Team RAM: You played a lot of festivals over this summer, were there any in particular that really stood out to you?
Canterbury: Slam dunk at the start of the season was real fun and also Y Not in the midlands was very unexpectedly fun!

Team RAM: Finally what has 2013 got in store for Canterbury?
Canterbury: Well im actually answering these questions from the studio, so new songs, new album, we dont wanna stop any time soon!

‘Heavy In The Day’ marked a new chapter in the bands life and is certainly an album worth checking out so if you haven’t already you need to get your hands on it. You won’t regret it! If you’re heading out to see Deaf Havana make sure you head out early and catch Canterbury, they won’t be a support band for much longer.