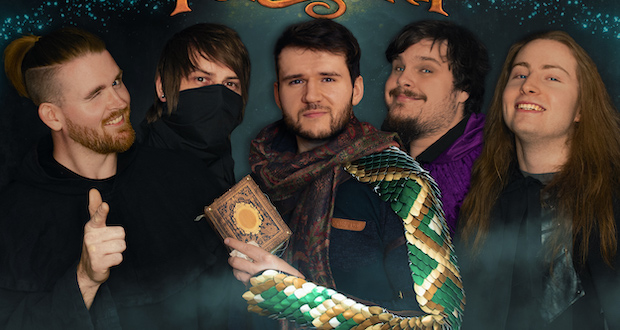 Anyone who has ever been to Bloodstock Festival will tell you to check out the New Blood stage to catch those hidden gems of bands, and the next generation of heavy music. They wouldn’t be wrong as bands like Evil Scarecrow, Ward XVI, and many more started as M2TM winners or unsigned bands on the New Blood stage. We caught up with one of this year’s bands – Fellowship to talk about being a positive power metal band, Lion King covers, and Bloodstock being their first gig.

In a nutshell, describe the sound of Fellowship?

Uplifting power metal with ultra happy melodies and uplifting lyrics. We’ve taken the sound of classic European power metal and tried to modernise it in our own way. So you can expect fast guitar solos, lots of double kicks, and some catchy chorus vocal melodies. Oh and some magical sounding orchestration to give it our own personal touch. Think Twilight Force, Majestica, Galneryus.

So do you feel there is too much negativity in metal?

Tough question. In the community, absolutely not – metalheads are and always have been from our perspectives incredibly welcoming and dedicated as far as fanbases go. In terms of the music… There’s a time to let out your frustrations and a time to conquer them. We wouldn’t say there’s too much negativity, but with the nature of metal being pretty aggressive, we think there’s more a lack of observably positive/life-affirming content in the genre!

How did you feel when asked to play Bloodstock 2021?

Oh, we were STOKED! We’re still a super young band and while we’ve had a fair bit of success over the last year, Bloodstock is a huge deal – I think our bassist had actually bought his tickets before we were asked to play! Weirdly enough, because of covid Bloodstock will be our first concert ever, which is really something.

So it’s your first gig – is this what you imagined when you formed?

Honestly yeah, pretty much! Maybe not the stage, maybe not the number of people into our music, but in terms of the music we make and the ideas behind it… yeah, we’re pretty much bang on!

How did set at Bloodstock come about?

We basically just sent an email application to the New Blood Stage, and a few weeks later got a very exciting email back.

I’m assuming your band name is from Lord Of The Rings, was it tempting to become a full-on Tolkien-themed band?

Actually, it was the opposite. We initially picked the name because it felt like it fit the music we were making, went along with the themes and lyrics, and so forth, but we tried to change the name because at first people fully presumed we were singing about the Silmarillion or something. I mean, we’ve basically dressed like Hobbits anyway! Don’t blame them. We kept trying to come up with a new name that felt as wholesome and fitting, but nothing felt quite as good for us as Fellowship, so we stuck it out. We have our own lore coming alongside the album, so hopefully, that will clear up all the remaining confusion.

When we started the band our guitarist, Sam, was really certain about one thing: that he wanted us to look like a BAND on stage, not just a collective of musicians. Once we’d picked a theme, we had to get clothing but we had no idea how expensive it was going to be! Our costumes are basically half custom-made fancy capes and half-random imports from that Wish app to save money. Brad still hasn’t found any lore-friendly shoes that fit him, and Matt burned a hole in his cape during the filming of Glint so has had to get it re-made.

One of the songs available to the public is a power-metal cover of ‘Can You Feel The Love Tonight?’ from The Lion King, what made you choose this song?

When we were first starting out, we knew that we wanted to hit the ground running and covers tend to hit a slightly wider audience than just coming out with originals right away. We figured that Disney songs would fit our sound, so we just looked for the ones that hadn’t been done very often as power metal, and I think at the time there was only one other version of ‘Can You Feel the Love’, so we went with that. To say it did better than we expected is a bit of an understatement, and the music video shoot for that was actually the first time we met our vocalist, Matthew Cory, in person.

Going back to the start, how did Fellowship start as a band?

Cal, Sam, and Dan are all from the same little village in Essex and had all seen each other play in local bands for a while. When Cal started writing the first batch of songs that would eventually become Fellowship, he assembled the others from the local scene. It’s pretty amazing to us how so many incredible musicians could have been in the same area and all into power metal at the same time, it felt really serendipitous. Less amazing was the fact that we couldn’t find a vocalist for about a year after that – we auditioned a bunch of them, but none of them were really what we were looking for. Eventually, Sam found Matt on a band-finding app called vampr; his other band was on hiatus, so he tried out with some lyrics and demo tracks. A week later, we’d written ‘Glint’. Within a couple of months, we dropped the EP and then realised that we’d need to actually play live at some point so brought in Brad, who Cal had played with before in a thrash band called Rezinwolf. The rest is history, as they say.

So is there going to be a Fellowship movie?

Ohohohohohoh, Matt has some serious plans. It might not be for a while, but… Well, let’s just say that if anyone in the business of making animated musical films and series happened to be in the market for a story with a full album of songs already written, then he’ll be the first one through that door. Seriously, he could pitch this tomorrow.

What can we expect from your set at Bloodstock?

The core idea behind a lot of our music is that we want people to leave our gigs feeling as good as we do playing them, so expect a lot of really high-energy, happy tunes that you’ll be able to sing along to even if you don’t know the songs going in. We’ll finish with fan-favourite ‘Glint’, so if anyone wants to sing along to something then that’s the song to listen to ahead of the gig.

Who else are you looking forward to checking out at the festival?

Oh, Gloryhammer is #1 on the list. We’d recently made friends with some of the guys in Unleash The Archers so we’re a bit bummed that they’re not gonna be there (darn you, covid), but yeah them, Devin Townsend’s always amazing live. Brad is super pumped to see Judas Priest, Dan will go for the heavy stuff, and Cal just wants to grin at all the happy power metal bands and get drunk. Oh, and Battle Born, we’ve been friends with them for ages, so shoutout to those guys – New Blood Stage on Thursday.

Do you have any general festival tips?

Baby wipes are your friends. Always use the toilets first thing in the morning after they’ve been cleaned. Stay hydrated. Create a meeting area for your group in case one gets dragged into a moshpit. Ignore the price of beer and just hand the money over. Plan out which bands you want to see to avoid any clashes. Throw up on a poorly lit path at 3:30 am.

What’s next for Fellowship?

We finished the recording process for our debut album just a few weeks ago, so that! We’re just finalising the harmonies and solos before final mixing, and then hopefully, FINALLY releasing the thing! Covid slowed us down a lot in terms of writing and recording, but we’re finally there and incredibly excited about what we’ve come up with. We’re still figuring out distribution, but hopefully, there will be some news there soon! Thank you to all our fans that have supported us this far.

You can stream all available tracks by Fellowship on all major platforms. You can check out their Facebook here and YouTube channel here.