Mordred’s Eyes are on the Prize 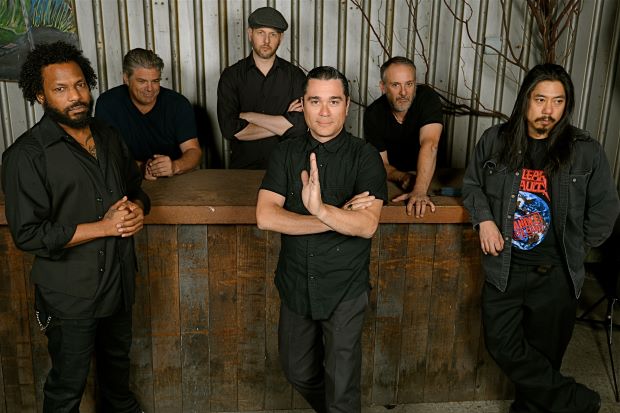 Crossover thrash act Mordred has released their latest single,  ‘All Eyes On The Prize’, from their new album Dark Parade, both out now through M-Theory Audio.

“This song is based on the idea of manifest destiny here in America, set to the backdrop of the transcontinental railway construction of the late 1800s,” explained guitarist Danny White.

“I was watching a show called Hell on Wheels, and it just struck me that manifest destiny and the idea that ruling America at all costs, plundering its resources and subjugating its indigenous inhabitants is somehow divinely preordained seemed antithetical to what a divine being originally intended. Colonisation is an ugly business.”

You can watch the video to All Eyes On The Prize’ right here at RAMzine.

Back together, with their new album out, they’ve release a couple of single from it previously, ‘Malignancy’ being the one back in June.

“‘Malignancy‘ was truly a band effort,” said White. “We all had a hand in the writing. The music was done and there were some attempts at lyrics, but the subject was just too close to heart to write about.

“I was relating it to (vocalist) Scott Holderby one night over drinks, and I said that it doesn’t matter who you are or what you do for a living – cancer doesn’t give a sh*t. He said I should just write that. The lyrics were written 20 minutes later. This is dedicated to everyone who’s lost someone to this wretched disease. F**k cancer.”

The video for the single features appearances from Chuck Billy (Testament) and Will Carroll (Death Angel) and you can check it out right here at RAMzine.

Formed in 1984 as the burgeoning San Francisco Bay Area thrash scene was beginning its rise to global prominence. While mosh-inducing thrash formed the basic blueprint of their sound, Mordred stood out as a unique presence due to their integration of funk-infused musicianship and hip-hop influences.

The group was one of the first bands to explore those diversities in extremes, but as the dexterous bass performance of Art Liboon and innovative turntable work from band collaborator Aaron ‘DJ Pause’ Vaughn provided a new spin on the thrash metal genre, the band retained its metallic bark thanks to groove-laden shred from guitarists Danny White and James Sanguinetti, and energetic shout-along choruses spearheaded by vocalist Scott Holderby. That combination of thrash metal and exploratory soul powered three full-lengths on Noise Records between 1989 and 1994, from debut Fool’s Game to eclectic sophomore follow-up In This Life, through to The Next Room.

The first single the band released from Dark Parade was ‘Demonic #7’, and white said at the time: “Timing on the release of ‘Demonic #7’ comes at a point when the USA and many countries around the world seem more divided than they’ve ever been in our lifetime.

“As we begin to hopefully and tentatively emerge from the self-imposed cocoon of covid, we ask ourselves if things will start to get better, or will it be a case of just when you thought it couldn’t get any worse, ’There are realms even lower than hell.’”

You can also check out the video for that her at RAMzine.

Formally reuniting in 2013 for live performances, but outside of the release of lone single, ‘The Baroness’ in 2015, fans would have to wait longer new music and fans of the band were finally satiated with the June 2020 release of the four-song EP Volition, with ‘Not For You’ extracted as a single (and available to purchase here).

Their new album, The Dark Parade, is the band’s first full-length record in over 25 years.

“I’m excited to announce the signing of Mordred. The band is legendary to me from reading about their early demos, to witnessing the group live at my first Bay Area club show after moving to California in ’87, to following their signing and releases via Noise Records,” explained label founder Marco Barbieri at the time.

“Mordred were always part of the Bay Area thrash fabric that I love so dearly but took their sound to whole new places creating something fresh and alternative and able to crossover between scenes when no one had the nerve or ingenuity to do so. I was stoked to see them reform and more so when they released new music. I knew that we needed to get involved in a cooperation to bridge the gaps between generations and styles and get their name and music back out there.”

“We’re super-psyched to be active again, and the kind of deal we have with M-Theory lets us maintain control of our music while benefiting from the expertise of Marco’s experience in the industry,” said guitarist Danny White. “It’s the best of both worlds. Mordred is putting the M-Theory into practice.”

In addition to putting the finishing touches on The Dark Parade, Mordred has also entertained audiences throughout 2020 with their streaming variety show and concert series, Mordred: Acting The Fool! where the band collaborates with writer, director, videographer Christian Powell  and features live music, interviews, sketch comedy and burlesque performances.

The Halloween edition of that series saw Mordred performing music from The Dark Parade. The event also featured guest appearances from guitarist Jude Gold (Jefferson Starship), burlesque performer Miss Kitty Oaks and South American thrashers Desastre Natural, as well as a healthy dose of tomfoolery, shenanigans, skits and shorts to satisfy any desire for the ridiculous and bizarre.

Last year they released the single ‘Not For You’. They followed it up with ‘Love Of Money’ and now ‘Demonic #7‘ – Videos for them all can be seen here at RAMzine.

Dark Parade will be offered on CD, digital, cassette, blue vinyl with orange splatter and a limited-edition, mail-order exclusive white vinyl variant and can be ordered here. You can also order Volition here.