Interview: All That Remains 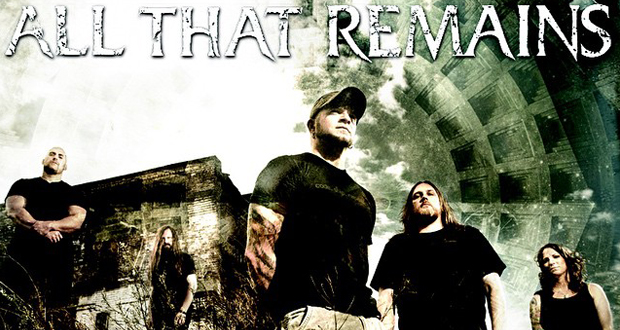 *UPDATE: 16/6/15 – After speaking with Phil at Download Festival 2015, we see that he just generally likes to be sarcastic in interviews, and he honestly didn’t know what touting was! See more here!*

It will be interesting to know what people think of this interview. Personally for me, as a fan, I found it quite disappointing. A part of me thinks perhaps we can call it a one-off, but all the recent press on the internet about Phil Labardo makes me think otherwise.

All That Remains ‘The Order Of Things‘ was released 23rd Feb 2015 via Razor and Tie. It’s a great modern metal album, and one that I had on repeat for weeks. Sometimes it’s nice to find out the story behind the music, and dissect how it was put together. That’s unfortunately not something you will read here, but at least you will find out what the album meant to Dave Labardo personally.

What in the world is going on with Phil Labonte in the press recently? There seem to be articles left, right, and center…

We really like ‘The Order Of Things’ it’s one of favorite albums of 2015 so far, it’s sounding very well produced, a fine piece of Modern Metal. We are seeing a lot of people on the internet saying your style has changed with this album, would you agree with that?

Nope, I think that our sound has been a very natural progression.

How did you approach making the album?

Honestly, the same way we do every record. We get together and show each other the ideas we have and ask ourselves “do we like this?” If the answer is yes, we use it.

Did the album turn out the way you thought it would?

Turned out better. Sonically, the disc is everything we had hoped for and everyone is pleased and I feel like the songs are our best stuff to date.

Did you have a goal in sight from the beginning?

Is their a set theme to the album?

What does this album mean to you personally?

It means I get to keep my job! lol. I don’t know how to answer that. I love it, it came out better than I had hoped and I couldn’t be happier.

Are you playing any festivals this summer? UK?

Across your career, which festivals stand out the most? and why?

The first time we played Metal Town in Sweden was awesome. Rock on the Range in Ohio has been great to us, but we’ve been a band and playing these fests for so long it’s hard to pick one.

If you could give festival goers one tip this year, what would it be?

Drink water. Don’t get dehydrated and miss half the show.

Get too drunk too early. Again, you’ll miss a lot of what you paid good money for.

Iron Maiden’s manager, Rod Smallwood, has recently appealed to fans and musicians to campaign against the secondary sales of gig tickets- ‘touting’. Is this a campaign that All That Remains will be supporting?

I have no idea what that is or means, but I love Iron Maiden.

Whats next for All That Remains?

Tour, tour, tour! We’ll be out and about for at least the next year and hopefully longer!