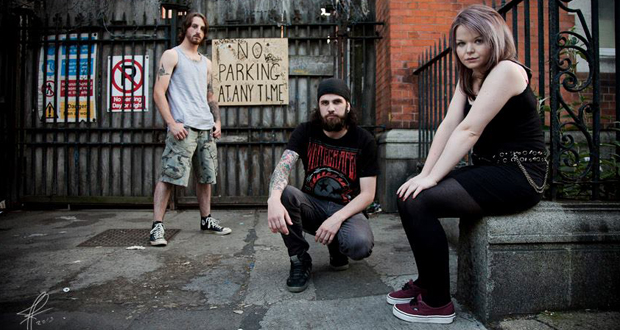 RAMzine caught up with Dan O’ Grady (bass/vocals), Danny Hall (guitar), and Claire Percival (drums) of Irish metal band Dead Label at this years Bloodstock Festival. We find out their top three bands, as well as asking Claire how she feels about being a female in this male dominated world, and finding out what Dead Label are up to next!

How are you enjoying the festival so far?

Danny: The festival is fantastic!

Dan: We are having a great time!

Claire: We are having an awesome time!

Are there any bands that you want to check out whilst here?

Dan: We are really looking forward to Rob Zombie later on. Can’t wait to see him. We have heard fantastic things about his stage show.

You have a got a new album coming out, haven’t you?

Claire: We do, it’s called ‘Through The Bones’.

Danny: Everything that we have been doing up until now has been leading towards this record, we are really happy with it. There is not one note on it that we are not happy with.

We hear that you recorded it in America?

Claire: Yeah in Loss Angeles, we did the drum in East West, and we did the guitars, bass and vocals in a places called Sunset Lodge.

Claire: We released a video in march, ‘Salvation and Sacrifice’ as our first single, as the album drops we are probably going to release our second single we haven’t decided. We don’t know whether to go with one that has bad language or not…

If you can describe the album in one word, what would it be:

If you had to curate your own festival, who would you put as the headliners?

Claire, you are the drummer in the band, how do you feel about being a female in the rock world? As it’s very male dominated.

Claire: I dunno…I guess it dosen’t really make any difference. I was born a female…

Dan: She hates the smells.

Claire: Yeah, you are around a lot of bad smells, but other the that everyone is really nice. It heps when you are a girl becuase everyone is nicer to you, becuase there is less of you. Thats the basic jist of it… it’s good.

Claire: I can’t at all, i’m actually terrified of mosh pits, thats why im in a band.

Danny: She actually broke her wrist at an Enter Shakari gig.

Claire: Yeah, I did! I like being on the stage where I can see all the maddness, but I don’t like being in the pit.

Whats next for Dead Lable?

Dan: Next we have two support slots with Gojira in Ireland. A Belfast date, and a Dublin date. We have had bloodstock looming for the past couple of months, and now that it’s out of the way we have Gojira looming, so we haven’t had any time to relax.

Danny: We are massive fans of Gojira, so this is a dream come true. When we got to play with Machien Head, that was an ‘oh my god’ moment. Gojira and Machine Head are two out of our top three favourite bands.

Do you think these support slots with bands such as Machine Head and Gojira, is that the best way to get your music out there?

Danny: Yes, absoultly! It’s great exposure, it’s also great to have on your CV. We may not have necessarily got the Gojira one if we hadn’t done the Machine Head one.

But we did the Machine Head support slot one, did a good job, and it was all thubs up. So when another big internatinal band came to town, we were on it!