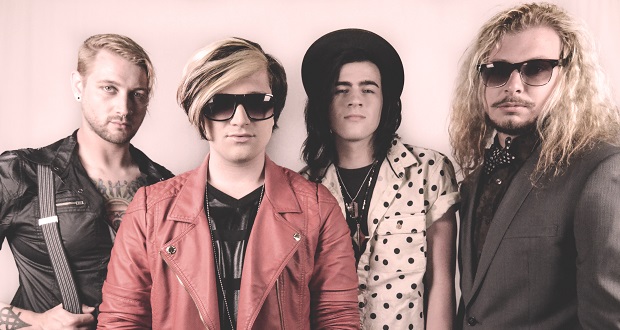 Farewell, my Love are back with a new album, new look and a slightly new sound. You may have check them out on tour with Ashestoangels and The Dead XIII last year, or maybe in the past in their previous formations. We spoke to guitarist Röbby Creasey  (above far right) about ‘New Grave’, their new album, their new image, videos and influences… as well as a possible return to the UK.

The new album ‘Above It All’ has just been released, how long did this take to put together?

It took about two years. We started mid 2014 and finished recording in 2015. After the previous record we started writing again, we had about 20 songs. Some of them didn’t make the cut but we had the intention of using all the songs we wanted to keep.

The last time we saw you in the UK was on the ‘British Horror Story’ tour with Ashestoangels and The Dead XIII, what are your memories of this time?

That was one of my favourite tours we’ve done so far. We’ve been touring for five years and being able to go over there and see fans we’ve never met before. The coolest experience of my life so far, and I’m sure the whole band agree.

We’ve known Ashes for several years because I remember going on Facebook and they would pop up. They reminded me of Aiden. We had toured the US seven or eight times so we were ready to expand. We knew we had so many fans over there because we send the merch from our house, so we know it was going to the UK.  I think it was Chad [Kowal, FML vocalist] who contacted Crilly [Ashestoangels vocalist] about doing a tour together. We’re now SUPER close friends.

The other bands on that tour are classed as ‘New Grave’, would you class FML as part of that?

We featured in Kerrang’s New Grave feature so I would consider us as part of that. I’m not one to put a label on us – we’re just a rock band playing music – but if you want to make us a part of that then I’m up for that.

If you had to put together a similar tour together yourself, which ones would you inlcude?

I’d like to bring Ashes to the US, but over there [the UK] I’d love to do something with Creeper.Will [Gould, Creeper vocalist] actually came to one of the shows last year and said he enjoyed it.He was really cool and super-nice to us. Another band I’d like to tour with over there is FVK. They fit in with the image and have their own sound which goes with what we are doing.

(note: this interview was conducted before the sad news about FVK disbanding)

Do you have any plans to come back to the UK soon?

We have been thinking about it and we are thinking maybe we will go international in 2017. I can’t really say anything right now…

There’s quite a mix of styles on ‘Above It All’ what were the main influences for this record?

That’s hard. With this record we definitely broadened our horizons in terms of writing. We’re all influenced by all different styles. What I noticed if you go back to bands like Queen, The Rolling Stones, Led Zeppelin…all there albums are very versatile. They touch on so many different types of genres. It’s not just ‘rock’. We wanted to be a band like that where our albums are extremely versatile, but still a FML record and still rock n roll. There’s something for everyone.

There is a lot of great solos and riffs on the record, who do you look up to as a guitarist.

Thank you. When I heard Metallica’s ‘Black Album’ at the age of 12 – I basically wanted to be James Hetfield. Not even Kirk Hammett – Jame Hetfield. Solos I learned when I was younger were Metallica or Maiden. More recently Avenged Sevenfold were my favourite band for a long time, so there you have Synister Gates. So a lot of my guitar playing routes back to me trying to learn Metallica songs. That’s a lot of hard music to learn at an early age. Meeting James Hetfield is on my bucket list for sure, I hope to play a festival with those guys one day.

As the music industry has changed do you feel it’s better that fans are paying for the music directly rather than being paid by a record label?

We released our last album on our own label…so that’s your answer right there. The thing with a label is: it’s like a bank. There’s not really anything they can do that you can’t do yourself. You just figure it out and work hard for it. So it’s a waste of money for a middle man. As much as I admire the ‘old way’. I feel the way we are doing things now is the best way for us.

You put out quite a creative video for ‘Crazy’ a few weeks ago, will we see more of that kind of thing in the future?

We do have more videos to put out actually. Directed by the same person. Chad’s known him since primary school, I feel like this video [Never Stop] is more defining on the record. The songs on this record are more personal, where as the previous ones were fictional characters. A bit like Maiden. These are personal life situations. So we felt like – we’re not ‘characters’ anymore. We don’t want to wear the matching uniforms or matching vests. We want to show our individual sides. We’re not really ‘dark’ people anyway.

Your new album has a very theatrical, cinematic feel – do film influences play a part when writing a record?

Absolutely! One thing I’ve always wanted to do is write music for a film. I listen to a lot of classical music. We had a cellist play on the intro which complimented out style. For example Hanz Zimmer is a bigger influence to me. I love his score for Inception and Sweeney Todd.

If you could form a super-group with any musicians, living or dead, who would it be?

Living or dead? Freddie Mercury on vocals, Marty Friedman from Megadeth on guitar, (pauses) Keith Moon on drums, and to hell with it – John Entwistle on bass. So the who with Freddie and a shredder guitarist.