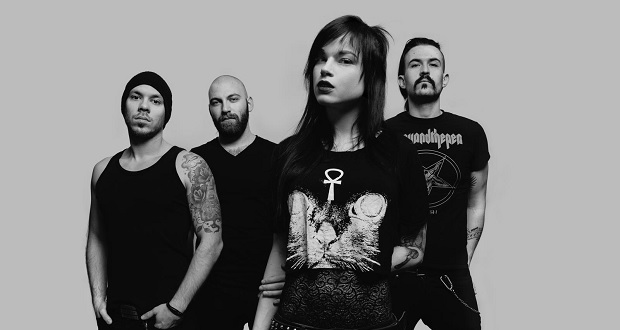 In the age of the internet it’s not hard to find great new bands from abroad, even if they have not released any material in your home country. In that case, we won’t pretend you might have heard of Hungary’s premier punk rockers The Hellfreaks. They have been around for 9 years so there’s a chance you could have heard of them at some point … if not, they are about to hit the world by storm. We caught up with vocalist, Shakey Sue, to talk about categorisation, being a woman in the rock scene, and butt slapping at shows.

Here you go! For anyone who hasn’t heard your music –  what do you sound like?I’m always happy when someone asks me that, because I’m not able to answer and it reminds me that we’re doing something good, cause we’re no copycats. But I won’t leave the paper blank at the first one: I would say we’re kind of a mix of Offspring, The Distillers, Marmozets with a voice that you can love or hate, but for sure nothing in between. We’re modern punk rock with a healthy touch of f**** off I would say.

Where did the name ‘The Hellfreaks’ come from?The only thing, that was clear to me, is that I wanted to have a one-word-band name, because at that time I was playing drums in a band with a longer band name and I was just sick of it. But to be honest, all that did not happen yesterday. The band is now 9 years old and I was more or less a kid when we formed it. The only thing I can clearly remember is: when I came up with the Hellfreaks idea was when I was working one of my first jobs, at a rockabilly bar – where I didn’t even earn $2 an hour, so far from home, that it was almost impossible to get back late at night. So in my eyes the birthplace of the band was quite a hopeless place and compared to that I’m very happy about how far it went!

You belong to a lot of categories in the rock family such as horror-punk and punk-abilly, do you feel categories matter?Let me clear something: we’re not a horror-punk or a punk-abilly band. It’s true, that our first album was pretty much horror influenced and that our second one still had the ‘billy’ touch, but since our last album ASTORIA 3 years ago,  we haven’t been using double bass on stage or in the rehearsal room. The line up – which split up in 2014 – was a different thing. Since 2015 we’ve been here as a punk rock band. Things have changed, the line up has changed, I have changed – and I’m very happy about it, that I’m not the same person as I was 9 years ago. I know that there are many people who don’t like changes, especially not in a band, and as music is a question of taste, there is nothing to discuss about it. But from the technical aspect the band has developed a lot. Also for myself, I can tell you that I’m working on my voice very much, and I’m very happy that things are going on for us, instead of standing on the spot. That’s why I don’t like it, when people ask me or the band to stay the same as we were years ago. We are working to get better – not to stay the same.

Do categories matter? I think for those who know the band it doesn’t matter what we name our genre. I think they would like us the same, even if we called us “Lasagne-Beat” instead of punk rock.  But on the other hand, you need to have a kind of “label” so that new people are able to find you. Just to compare: if you go to a shop and want to buy a cucumber for your salad, you won’t check the shelf with potatoes, cause in that moment you’re looking for a cucumber and are just not interested in that useless portion of carbohydrates.  So in this story, if I want to be the cucumber which goes into that salad, it doesn’t matter how cucumber I am inside, if I look like a potato from the outside. So, yes, it is important, but only to make it easier for new people to find you.

You are one of the few bands from Hungary who have had some success overseas. Is there much of a scene there?

We have a lot of great bands and a lot of great musicians over here, but unfortunately, if it comes to gigs in Budapest, it’s quite hard for us to find a good match, as there are no bands like us in Hungary. Of course we have some great punk bands, but they are all from the “good old times”… but anyway, there is no scene like you have it at all. Maybe that’s one of the reasons we’ve always been so motivated to play abroad.

Like yourselves, there are a lot of female musicians in rock – do you feel the industry has changed for women?

There might be a lot of girls in the UK scene, but there are still just very very few in Hungary. But it doesn’t really matter, cause for me there is nothing special about being a woman in the music industry. I think the most annoying thing – and please don’t take this personally – is that I get this question way too often. But that seems nothing new, cause Brody Dalle nailed it in one of her interviews in the past (before I started music) : “I don’t play guitar with my pussy.“ There haven’t been any walls for girls to break through to go on stage, to be part of a band. If girls have problems with working with guys, it’s their goddamn problem, but it’s not a gender role problem that has to be solved.

Your Facebook describes your music as “kick ass with an amazing power package of butt slapping music!” Do you encourage this at shows?I think I would love to see how the crowd slap each other’s butt, but I guess that might end up in some conflicts, so I’d rather not do that.

You have just released a new video (I’m Away) how much creative control do you have of your video?100%. I think you would all be surprised if you knew how DIY we still are. Basically we still do everything by ourselves. So there has never been any management, label etc behind our backs who’d have told us to do what we did  – every idea, every move, every second of the video happened exactly the way we wanted it to be made. But the father, or rather fathers of the video are a small Hungarian video production team, who came up with the full idea. But we immediately fell in love with the concept.

I’d like to invite you all to have a look behind the curtains. We’ve just released the behind the scene video of the making. Of course we speak Hungarian in the video, but don’t worry, we’ve prepared English subtitles for you. I think you’ll get a good impression about what the shoot was really like!

Speaking of making the video, I believe it was funded by fans through indiegogo – do you think fan funding is the way forward in the music industry?I don’t think that, no. It is a good experience, but also a tough one. It is good that we’re able to speak to our fans directly from all over world to ask for help – but it would be way better if we didn’t need to ask for help.When you talk to your fans on your social media platforms, or speak on stage, you never talk about the work behind it. You never face them with all the problems you struggle with. Most people still think that there is a kind of background of a manager, labels etc. who are dealing with all that. But in our case, there is nothing like that. So we got some really hard reactions, like “So should I start asking for money when I want to buy shoes?“ or “Go and start working instead.”  These things really hurt us, as we’re all working besides doing the band, and just the band gives us so much work that it could easily be called a full time job. I recommend it only if you’re totally out of financial resources and also out of hope, but on the other hand, we also received many many heartwarming messages and help.

Are you planning on playing in the UK soon?We would love to, especially at Rebellion Festival, but there is nothing fixed yet.

What else is next for The Hellfreaks?

2018 will be the year of our new album, which will be for sure the next milestone for the band: but let’s talk about it when the time has come! Thank you for having us! 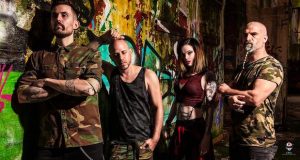 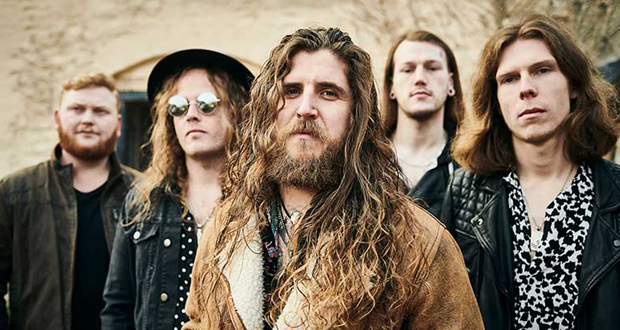 While the current climate has us all locked away from who and what we love ...