Billy Idol will bring his Live! 2018 Tour to the United Kingdom and across Europe next summer. The earliest date to be announced is a 20th June show in Manchester with more dates to be revealed soon. 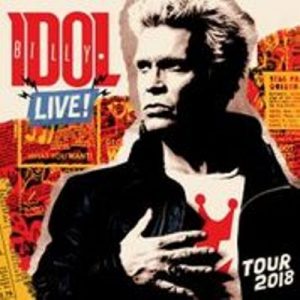 It will be Idol’s first UK/European run since his return to the spotlight in 2014/2015 with the release of Kings & Queens of the Underground his first album of new material in nearly a decade. This coincided with Idol’s New York Times bestselling autobiography Dancing With Myself, where he revealed the ups and downs of his career from fronting punk rockers Generation X to becoming a huge hit over in the states as a solo artist with MTV screening hit singles like ‘White Wedding’ and ‘Rebel Yell’ on rotation, and beyond,

“Wrapped in leather and soaked in nostalgia, the punk zealot serves up hard riffs with attitude… Idol struts and snarls, propelled by the conviction that rock is the cure for whatever ails you…. This show is nothing if not fantastic fun.” wrote The Guardian newspaper of his appearance at the London Hammersmith Apollo appearance back in 2014. So expect more of the same in 2018.