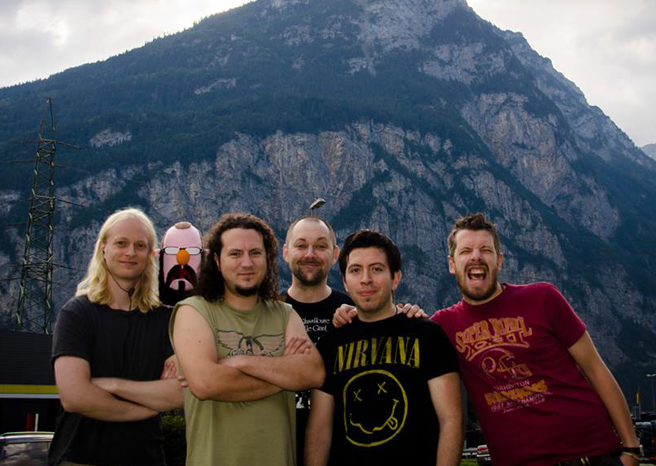 At this year’s HRH PROG Festival at the Magna Centre Rotherham RAMzine managed to catch up with the young British prog-rock saviours HAKEN to chat about their new album: ‘The Mountain’ (just released on Inside Out – Century Media). 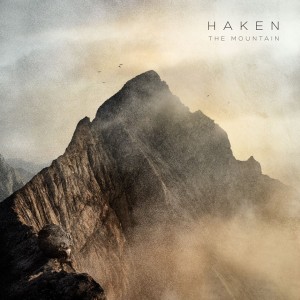 RAMzine: Why is your new album called ‘The Mountain’?

“I guess it’s kind of an analogy for the uphill struggle for us… Yeah, literally. Although the band have chosen to be playing prog music, erm, it’s quite hard. It’s kinda, em, more about the challenges that we face as a band and as we all come together and climb that mountain of truth.”

RAMzine: So things like: A person can start to climb a mountain but you’re not going to survive unless you go as a team …

RAMzine: So, I’m filling in your album liner notes for you [massive laughter].

RAMzine: And were your other earlier albums ‘concept’ albums?

“This is different. Our other two albums were concept, like narrative concept …”

“But now this one… I think again we have deliberately decided not to make a concept – but to have individual songs, yet at the same time – we were kinda of coming up with things and it just happened that this theme appeared.”

“… It’s not really a thing we decided to talk about the struggles of life or anything. It just came about.”

RAMzine: OK. So how does the actual song writing work for you?

Richard: “It’s a serial process. I work in a manner similar to that to what we have done in the past. I’m coming with original compositions and then send these in turn to the other guys – then we take them to a rehearsal room and, we play around with the arrangements and adapt things here and there. We add our own spice to things, and the end product is always slightly different to what it originally was.”

“Diego’s [Diego Tejeida – keys ]has also written a song on this … A really nice piano/vocal song.”

RAMzine: So, Diego, you are on keys…

Diego: “Yeah, a lot of the time the melodies and the harmonies come from the keyboard whereas, you know, a riff-based thing is kind of rocky …It comes from the guitar. But on this new album there’s kind of a mixture really, about an equal amount of keyboards and guitar.”

RAMzine: Richard, how do you feel when you have brought a song to the band and they say they want to change it? “So sometimes I’ll send them a song and they’re like “Actually, that sounds like this band from the ‘80s”.. And then I’m like: “I haven’t heard that …”

All: “Yeah! He does that quite a lot actually …”

Diego: “He sort of comes up with a riff or a melody … and it really is great and you know – you might have heard it somewhere before – I don’t know. But he’s such a great talent.”

RAMzine: Everyone else must be struggling too though, yes?

“Yeah, but, er, in the end, you know, we have all come together and it’s the end product that we’re all happy with.”

“I believe – with ‘The Mountain’ we’ve got something that’s really original. It’s definitely different for us . By having 6 inputs …”

“Yeah, and that’s been a conscious effort on this album. As Charlie said earlier, to give each song it’s own flavour whereas like “Visions” [their October 2011 release] there’s more of one long, flowing, mix – that’s split up into sections. But here, we really wanted to give each song it’s own kind of stamp, and it’s own message, you know. With the lyrics hopefully coming across.”

RAMzine: Will there be some kind of tour to go with ‘The Mountain’ upon its release?

“Yeah, There’s some Euro dates in September and October, and we’re aiming for more. Nothing’s set in concrete yet, though.”

RAMzine: Do you get a sense that prog rock is enjoying a renaissance?

“Yes, we certainly think so. We think , of course, Dream Theater, large groups like this – they are getting even bigger …”

RAMzine: Don’t you think that Dream Theater‘s popularity has waned though?

“Perhaps , yes. But we still think they are a cool band.”

“We saw them at the Marquee in ‘93 … There were about 10 people there … [all laugh]. Now, when they play arenas like Wembley, they sell out instantly. It’s such an achievement. I’ve got a feeling that they’re kinda the last band to be on that kinda scale in this kinda genre, that’s my feeling of it, you know …”

“But saying that, you’ve got bands like Rush coming back and selling out, you know, and touring everywhere …”

RAMzine: Well, we get the feeling that the best is yet to come. You guys, Enochian Theory, Tesseract, Von Hertzen Brothers. To us, it’s all looking very promising for progressive rock. Thanks to the new bands.

“It would be nice to think that. We feel a bit humbled. And with Prog Magazine in the U.K. … it’s looking good.”

RAMzine: Tell us about writing ‘Atlas Stone’. [From the new album.]

“Atlas Stone … After much deliberation, e-mails back and forth for about four weeks or so, we finally agreed on it and it’s … it’s basically the idea of having the weight of the world on your shoulders …”

RAMzine: Do you actually feel that kinda pressure when you’re making an album?

“It’s genuine, you know. You feel that you are undertaking one of the hardest things. There’s no kinda of way round it … but, you know … It can be soul destroying as well …”

“… Anything you have to struggle through in life … though … can be good for you.”

“I think you can relate ‘Atlas Stone’ to current times, recession, people going through struggles and general down-turns. It’s kinda where we think it’s coming from.”

“Yeah, it just seems to be all about the moment. It’s not us moaning about being in a band by any means … We try and put a positive kind of spin on it.”

“A lot of the music is inspired by this guy Vince DiCola, have you ever heard of him? He wrote the music for Rocky IV. I don’t know if you’ve heard the soundtrack for Rocky IV [but] we’re big fans …”

RAMzine: Yes we know about him. And he did the Transformers movies too.

RAMzine: So there are a lot of influences ‘behind the scenes’ ?

“Yeah, And we’re even big fans of country music as well … Well I know you are [laughter – all pointing to each other].”

RAMzine: We’ve heard of him too. But we’ve got a fear of country and western!

“Yeah, I know, but country music is just flawless I tell you, it’s incredible. It blows your mind away, but, em… [discussion dies out].”

RAMzine: We have enjoyed chatting with you. Thank you Haken. Good luck with ‘The Mountain’.