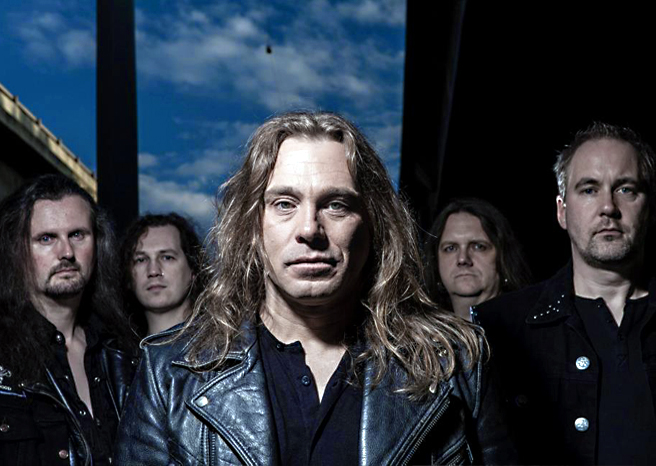 We spoke to Jan Bünning who plays bass and backing vocals for German Heavy Metal band Paragon. We caught up with Jan after Hammerfest 2014. This was Paragon’s first ever UK appearance – we hope to see them back over here soon! Their performance gave that classic metal vibe, that we so love here at RAMzine. Our favourite track of the set has to be ‘Tornado’ taken from their 2012 album ‘Force of Destruction’.

In this interview we discuss Hammerfest, and why it took them so long to play in the UK. Jan also talks about the genre Power Metal not being the same as what he remembers when he grew up.

We know you have a pretty hefty discography (of 11!) But since you are new to us at RAMzine, can you tell us a bit about your storey. How did Paragon start?

“Martin Christian (who’s mother is from the UK!) founded the band in 1990 in Hamburg Germany. As many bands we had some line-up changes over the years and a few years ago even Martin left us because he wanted to spent more time with his family. Our Singer Buschi and I joined in 1997, our guitar players in 2010 (Wolle) and 2012 (Jan) and our drummer is the newest member as he joined us only two month before.”

“We already toured with a lot of bands like Iron Savior, Grave Digger and Gamma Ray, played many festivals like Sweden Rock, Bang Your Head, Headbangers Open Air and of course Wacken and we played with bands like Saxon and Virgin Steele.”

Your first visit to the UK was Hammerfest! How did you find it?

“We had a lot of fun and it was great to play the UK for the first time. We had many chats with English fans and really enjoyed the time we spent in Wales.”

Why did it take so long for you to come and play in the UK?

“Good question! We always have good reviews and fan feedback from the UK and English speaking countries in general. Maybe it´s because we are now on a bigger label and the festival promoter’s didn´t noticed us before? I really don´t know but we really hope to play again soon!”

What do you think of Hammerfest as a festival?

“It was a very cool festival and also a strange experience in some way as we never played in an amusement park before! But the fans were great, the weather was great and the day after the show we felt like in some holidays!”

[Hammerfest 2014 was located at Hafan Y Môr Holiday Park in Wales, which is a leading Haven Holiday Park. More information at www.hammerfest.co.uk]

How did the signing to Napalm Records happen?

“A friend of us recommended them as they are one of the most growing labels at present. So we sent them a demo and they liked it. They have a very good distribution (Universal) and did the best promo we ever had with about 100 reviews for our last album ‘Force of Destruction’.”

What drives you to make Heavy Metal?

“I think ‘Metal’ is like a drug which keeps us alive. We all have families and a regular job but without Metal we wouldn´t be happy. We are still fans and buy a lot of albums and it´s a good thing to enjoy when live is not nice to you.”

Who are the bands main influences?

“I would say we are a classic Heavy Metal band with some Thrash influences. Many people say we are a Power Metal band – but to be honest I hate how the term Power Metal is used these days. When I grew up Power Metal was stuff like Overkill or Metal Church (which are two of our influences) but these days bands like Sonata Arctica, Dragonforce and Sabton are called Power Metal and that´s absolutely not what Paragon is about. We are more influenced by stuff like Mercyful Fate, Helstar, Candlemass, Agent Steel, W.A.S.P., Iron Maiden and of course mighty Accept and Judas Priest!”

What’s next for Paragon?

“We wrote about 12-14 songs for our next album and soon will start the preproduction. We don´t know 100% but I guess the album will be released in the beginning of 2015. Our fans can expect a mix of fast, stompy, doomy stuff and we even have a very long and epic song again on the album clocking about 10-14 minutes. Our friend Piet Sielck of Iron Savior will handle the mixing again but we haven´t made up our minds about a title or cover design.”

“Furthermore we will play more festivals in Austria, Denmark and Germany in 2014 and hope to make a little tour next year again. So be prepared for a massive dose of Metal in 2014/2015!”

“Cheers to our fans in the UK and thank you for interviewing us!”