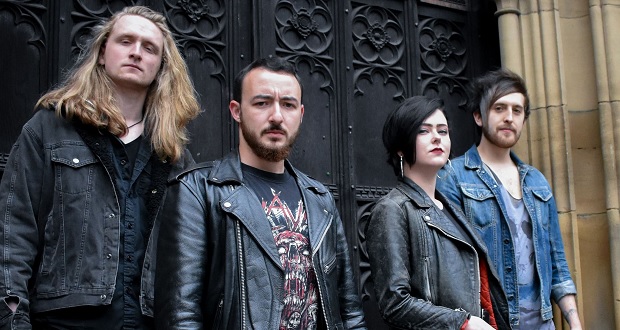 Only four weeks away, Bloodstock looks to be bigger than ever. Yet, what makes Bloodstock stand out among all the other great metal and rock festivals in the UK? I’d say it’s the championing of new, and unsigned bands. The New Blood Stage is the physical embodiment of this. The way to qualify for this is by winning heats of their famous ‘Metal To The Masses’ competitions. These take place across the country, and the world, to give any potential bands a chance.  In the coming weeks we will hear from a few of these bands, starting with Newcastle winners Kilonova. We talk sexism in the rock scene, playing gigs, and why Bloodstock is the leading  metal festival in the UK.

Congratulations on winning the Newcastle heat of M2TM, how do you feel about winning?

Joe Bambrick (bass): Its crazy to have won! having only started gigging in April it feels very sudden to be preparing for Bloodstock. There were no easy wins in the rounds leading to the final, several excellent bands could easily have been stood in our shoes.

What do you think gave you the edge over the other bands?

Joe: A band can have the greatest musicians in the world, without any chemistry and the back and forth between every band member the show lacks something. We can all go onstage and know we have eachothers backs, and know we’re there with one purpose. Were there to put everything wehave into the show.

Has it always been a dream to play Bloodstock Festival?

Jonny Sloan: It has! I have seen so many of my heroes play at Bloodstock over the years, so the oportunity for Kilonova to play is mind blowing. I still cant quite believe were playing the same festival as Judas Priest!

Why do you feel Bloodstock is the country’s leading metal festival?

Joe: Bloodstock doesnt pander to whats trendy, its all about celebrating great bands and giving opportinities to young bands to keep the metal movement healthy.

Do you feel every festival should have a ‘New Blood’ stage?

Ellen Hill (vocals): 100% it allows new bands the opportunity to play to a large and different audience. It’s also an experience that I think will be like no other shows we have played.

As a band with both male and female members, do you think the rock industry can be  slightly sexist at times?

Ellen: In the short time that we have been together, I have already experienced a large amount of sexism. From comments like ‘the only reason they got through is because they have a lass singing’ to members of other bands treating me differently compared to the boys. I think it’s just something that needs to become normalised in the way that more women are encouraged to be in metal bands. Its like anything though, we’ll have a large amount of people who are really supportive but then a few that just aren’t into women singing rock…

I also think people don’t expect us to be a thrash metal band because we have a female vocalist even though there are some amazing vocalist out there that do the same sort of style like Maria Brink (In This Moment) and Alissa White-Gluz (Arch Enemy).
I’m sure at one point or another these women will have experienced the same kind of thing that I do, but they push past it and carry on. They are really inspiring women to me.

For anyone who hasn’t heard Kilonova before – how would you describe your sound?

Joe: Our sound takes alot from old school Thrash, but we bring in elements from everything we listen to; Metalcore, Death Metal, Stoner, Prog… Its’s stuff to bang your head to.

What bands inspired you to start Kilonova?

Where does the name come from?

Joe: A Kilonova is the collision of two supermassive dead stars in a crucible so violent it distorts spacetime. It;s where most of the heavy elements in the universe are formed. What could be more metal?

Do you feel playing live is more important than ever in 2018?

Joe: Bands have to connect with their audiences on a personal level to succeed, so getting out and playing the material live is the perfect way to bring fans into the experience. Everyone has that story of an amazing show they tell you for years to come, its up to the bands to use their shows to createthose unforgettable moments.

Who are you looking forward to seeing at Bloodstock?

Alien Weaponry, Gojira, Judas Priest, Devildriver, At the Gates, Power Trip, Sertraline and as many of the other M2TM winners we can fit in.

Are you regular festival goers? If so, what tips do you have for the fans going?

Steve Rouse (Drums): Make sure your tent is easy to get out of if you need to puke. Things can get grim very quickly.

So will you be joining in with the Ace Ventura dancing during Cannibal Corpse’ set?

Jonny: My Hawaiian shirt is ready!

What’s next for Kilonova?

Where can we find you on social media?

Featured Image by Newcastle Live Bands. All other photos by Richard Jennings Photography.