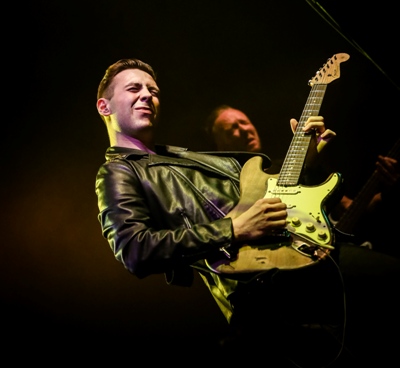 Laurence Jones plays guitar. He’s played guitar and sang on some pretty big stages around the world, fronting his own band and supporting some major ones. Success has not eluded him in terms of record sales, and with a heady mix of rock, blues and pop to be found on his latest album The Truth his self-confidence is apparent. Ahead of his new UK tour, Paul H Birch interviewed Laurence Jones, the results of that tête à tête now featured here at Ramzine.

Paul H Birch (Ramzine): “The future of the blues” is a tag that’s been used to describe you. Is that something you try to live down, or take on board and try to rise to the occasion to?

Laurence Jones: I don’t feel pressured by this tag. If anything it’s more of an appreciation of my achievements. People in the music industry have given me this tag and it’s great to be labelled as this but what means the most to me is that my fans accept it. I’m very lucky to have the best supporters who appreciate my music, no matter what the tag may be.

Laurence Jones: To paraphrase an old classic, when was the first time you met the blues? What was it that appealed to you?

Laurence Jones: I started on classical guitar at the age of eight and when I first heard the blues I was twelve years old. I heard Eric Clapton’s take on the blues and he inspired me because of how modern his music felt but at the same time I had this feeling I couldn’t describe. I kind of wanted to rebel from the classical guitar and the blues provided this escape. It allowed me to improvise and to play how I wanted to in that moment.

As I’ve mentioned, I started to play classical guitar at the age of eight but I taught myself electric guitar at the age of twelve. In the early days I used to tour around pubs when I was fifteen and sixteen every weekend. I had a girl singer in my band and we would cover classic 60s and 70s songs. I discovered that if I wanted my own band with my own name I was going to have to sing. To me it felt natural because all my heroes played guitar and sang, so I was following their footsteps.

Ramzine: So you were hardly playing in your bedroom for long then.

Laurence Jones: I always wanted to play in front of an audience. I didn’t want to play in my bedroom forever; I wanted my music to be heard. I think you have to believe in yourself.

Ramzine: When did things begin to take off and you make the decision that playing music could be a viable career move?

Laurence Jones: I always follow my heart. Music did not feel like a career to me. It is who I am and it’s a part of me. As the years went by and I got my first record deal at eighteen, it became a career but I didn’t start out making music to make money.

Ramzine: So you mentioned you always planned on fronting your own band rather than be part of one; why, and what kind of pressures does that bring?

Laurence Jones: Yes, because I could never sack myself and I knew this was what I wanted to do the rest of my life. The only pressure I sometimes feel is for my band members and I have to have a responsibility to keep the team around me happy. If you move forward as a team everything moves in the right direction. Just because it’s my own name does not mean I do everything myself, it’s just that I have a strong vision.

Ramzine: Having sold 50,000 records so far that’s far from anything to be sniffed at in today’s marketplace. You’re still a young guy, was getting a record contract in the first place difficult?

Laurence Jones: Yes, it was very difficult. The music industry has changed and is not the way it used to be. When I first got my record deal I thought I had made it but that’s when the hard work started. I got in the van and toured over two hundred gigs a year, all around the world.

Ramzine: You’ve also opened for a truly diverse range of major artists, including Van Morrison and Status Quo. Is this crossover audience the kind you’re seeking to attract with the release of your latest album, The Truth?

Laurence Jones: Yes, it is. They are people who appreciate songs, not just my guitar playing. My new album is all about the songs. When people go to see Van Morrison and Status Quo they want to sing along to the hits. I want people to sing along to my songs too. When they do it’s the best feeling ever because that means my songs have connected with people in the same way.

Ramzine: I gather The Truth was recorded in the Caribbean?

Laurence Jones: Actually the album was recorded in Miami at the old Sony studios. We spent three weeks doing pre-production in the Caribbean for the new album.

Ramzine: One finds it hard to believe this was an arduous work period? Were the songs all recorded prior to going there?

Laurence Jones: Sometimes people don’t understand how much hard work goes into writing and recording songs. The reason we went to the Caribbean is because our producer, Gregory Elias, is from there and we all needed to be together. We spent ten to twelve hours everyday in a rehearsal room working hard. We had a couple of days off and we got to have the full Caribbean experience but only after working hard. You work hard, you play hard.

Ramzine: The final song on the record is ‘Never Good Enough’, one you wrote when you were 18. That’s some time you left it to percolate. Has the song been changed or was it finding the right home for it with this album that made you hold off recording it?

Laurence Jones: I was waiting for the right time to record this song. The chorus is exactly the same but this particular song would not have fitted on my previous albums. I knew it was a good song. I just put it to the side until the time was right. The verses of the song felt like the old me so having my band and producer around during pre-production made this song come to life.

Ramzine:  You can hear rock, pop, and blues on the album. Are you concerned that in the very diversity you offer you might alienate listeners?

Laurence Jones: No. I’ve never put out just a rock, pop or blues album. I have always had different styles of genres throughout my albums. This is the reason why my fans follow me and support me. There is no such thing as being too diverse.

Ramzine: Which of the tracks are your current personal favourites and does that necessarily mean they’re songs that suit the live arena best?

Laurence Jones: My personal favourite is ‘What Would You Do’ because of the message it has behind it. I wanted to write about what was happening in the world right now and what it would be like if it was different.

My second favourite track is a song called ‘Take Me’. I have never recorded a ballad like this before, in terms of how open and emotional it is. There is a lot of heart and soul that has gone into this track and I believe this was a mature decision to make, to sing words on stage that are so personal to me.

Ramzine:  Lyrically, you’re singing about romance and heartbreak on the one hand then taking a broad look at the state of the world right now. Are you frustrated about society at large right now and can music help relieve that pain?

Laurence Jones: Yes, there is an element of that. I have said that music is my healer and I believe it could also heal society. There are a lot of crazy things happening in the world right now, so what harm can a bit of music do to cheer everyone up?

Ramzine: How long has your current band been together, and who’s in it?

Laurence Jones: My present band has been together for a year and four months. Finding the right band is all about the timing. For me this album does not feel like a band of session musicians, it is a band of friends, all working towards the same dream. I have Bennett Holland on keys and vocals, Greg Smith on bass and Phil Wilson on drums. When you find the right band that you click with musically it really is amazing but to also have the right band where you all click personality wise is a real bonus and this is the difference between a band of session musicians and band of brothers.

Ramzine: You’ve a short UK tour coming up, are you excited about this?

Laurence Jones: Yes, I am really excited to be playing the new songs from my new album to everyone across the UK. Before that we will be heading out to Spain and Holland so we will certainly be road ready for the UK.

Ramzine: And what are your plans after the UK tour?

Laurence Jones: We’re touring over fifteen countries until the end of the year and me and the band are always working on new ideas. I don’t sit down and say “I’m writing an album today”. I write songs when I feel inspired and being on the road, seeing the world and meeting amazing people along the way keeps on inspiring me to write albums. I’m always learning from life experiences and always feel the need to progress and be a better person as well as a better musician.

Laurence Jones’ new album The Truth is out now, for more information click here. His UK tour takes place in May, with dates and venues listed below.